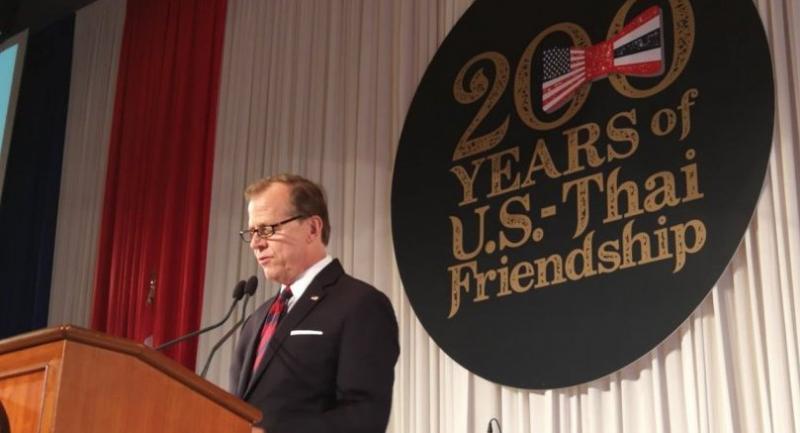 US AMBASSADOR to Thailand Glyn Davies is calling for Thailand to return to democracy as the Kingdom moves towards an election under the conditions of the 2017 junta-written constitution.

“Free and fair elections will strengthen Thailand as a leader in the region and will also [open] new opportunities to further strengthen our partnerships,” Davies said in a toasting speech to the US Independence Day early celebration on Thursday night.

Davies told reporters that democracy is best way to connect the country’s people with the government and that Americans “want Thailand to be successful, strong and prosperous” and “have hopes for an early return to democracy to move forward society together”. The envoy refused to comment, however, on making concrete the junta’s so-called “roadmap to democracy” as well as constitutional provisions that will ensure ongoing elections.

Davies will be leaving Thailand in a few months after three years of service in the Kingdom. He made headlines back in 2016 when he publicly clashed with Foreign Minister Don Pramudwinai soon after the US grilled Thailand on human-rights concerns at a UN Human Rights Council session.

Summoned to the foreign ministry for a meeting with Don, the ambassador catalogued Thailand’s suppression of political rights under the junta, including prosecution of social-media users, limitations on negative public commentary about the then-draft charter and the prosecution of civilians before military courts at the time.

But it was a one-time clash as Davies, while adhering to the US core value of democracy, has largely kept a low public profile over disagreements with the Thai government.

This year, he also launched the long-prepared Great and Good Friend exhibition, which displayed artefacts exchanged between Thai kings and US presidents to celebrate the 200th anniversary of diplomatic relations between the two countries.

Davies has remained in the post through the transition of the US Executive branch from |Barack Obama to incumbent Donald Trump, who personally greeted PM General Prayut Chan-o-cha at the White House last October.