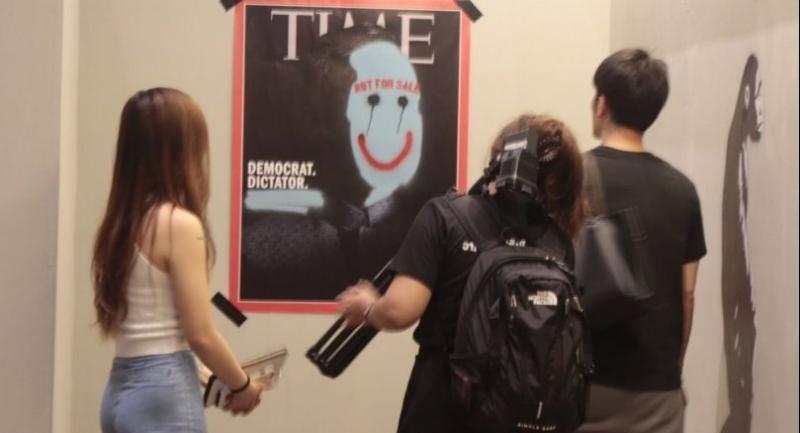 THE PORTRAIT of Prayut Chan-o-cha on the cover of Time magazine was yesterday erased and sprayed with the word “Not for Sale” by a young Thai graffiti artist going by the moniker Headache Stencil.

The young Thai artist addressed the dark side of Thailand four years after the 2014 coup d’etat in his solo debut, “Welcome to the Dark Side”, which opened yesterday at Voice Space located in the Voice TV compound on Vibhavadhi Rangsit Road.

Headache Stencil is known for his street graffiti mocking Deputy Prime Minister Prawit Wongsuwan over his collection of luxury wristwatches. Headache Stencil earned harassment headaches from the junta and his creation was scrubbed away.

“My art reflects dictatorship, corruption and the loss of freedom in our society,” Headache Stencil told The Sunday Nation.

“It’s the artist’s most important role to mirror society’s illnesses and tell the world what Thailand is now facing under military junta rulers.”

His graffiti art is displayed in the 120-square-metre maze, greeted by a mascot depicting a primer portrait in the |shape of Japanese maneki-neko cat.

A submarine ordered from China by the junta is portrayed on one wall, while another depicts alarm clocks with a portrait of Prawit and his luxury wristwatches.

Allegedly corrupt Buddhist monks are on another corner, and nearby are crossed fingers with the words, “Please give priority to children, ladies   and dictatorship”.

The artist has named the Kingdom under military rule as “Kala Land” or “the land under the coconut shell”.

It’s symbolised by a photo of a coconut shell overlaid with a gun near a couple of doves – the symbol of peace.

At the end of the labyrinth, the artist has installed a ballot box with the word “Freedom” surrounded by soldiers in boots with no-entry tapes.

“Thailand is now like a maze. We’re finding the way out of this political maze,” he added. “An elected democracy is the only way to take us out of this maze.”

Dozens of his fans flocked to the show, which runs through July 6, as they oppose censorship. They take selfies with his artwork and post them on social media.

“I hope they will help spread the word on the socio-political situation in Thailand throughout the world,” said the artist.