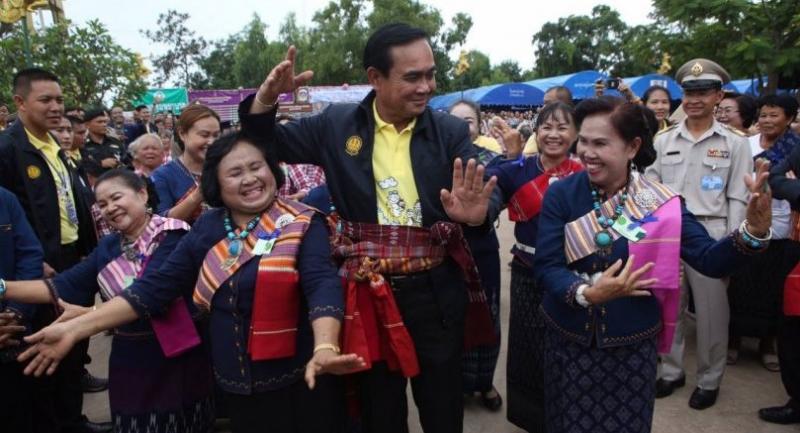 Prayut during the mobile Cabinet excursion in Amnat Charoen Province

FOUR LOWER northeastern provinces are planning to push the Cabinet to approve Bt10 billion for development projects – part of a plan to turn the area into a trade hub for Indochina – when Prime Minister Prayut Chan-o-cha visits the area today.

Officials and business executives from Ubon Ratchathani, Amnat Charoen, Si Sa Ket and Yasothon province intend to raise the issue at a mobile Cabinet meeting in Amnat Charoen and Ubon Ratchathani. The meeting began yesterday amid tight security to prevent local protests as the province is a major stronghold of dissent.

A local academic yesterday questioned the lack of public participation in the latest mobile Cabinet meeting.

Titipol Phakdeewanich, dean of the faculty of political science at Ubon Ratchathani University, said that in principle the mobile Cabinet meeting was a good idea but in reality the government did not really allow public participation.

The academic and his colleagues had recently been contacted by the military and asked not to organise any dissenting activity.

Titipol said the mobile Cabinet meeting did not create any political change but showed that the junta had a military mentality that was the opposite of democratic values.

Local officials argued that any movement against the junta could be at the expense of limited budget allocations to the provinces. But Titipol said the Cabinet would not be very professional if it took protests personally.

Prayut denied his latest trip to the Northeast was aimed at “giving away money or wooing votes”.

The Cabinet was scheduled to convene its mobile meeting at Ubon Ratchathani University this morning.

The proposed development projects can be divided into five groups – logistics such as road, rail and air transport; agriculture including reservoir and dyke construction; industrial manufacturing; tourist destinations; and quality of life, according to Wittaya Wirarat, who heads the chamber of commerce of the four provinces.

The plan includes turning the Yasothon airfield into a commercial airport, expanding the crowded Ubon Ratchathani airport, constructing four-lane roads, building reservoirs and dykes, and expanding Sunpasittiprasong Hospital in Ubon Ratchathani to cope with patients from the four provinces.

Wittaya said local businesses were pushing for the four provinces to become the trade hub of an “Emerald Triangle” that also covers Laos and Cambodia.

“The economy of our provincial group is going strong, thanks to the border trade with Laos and Cambodia. We expect growth of 4 per cent this year,” he said.

The PM told local residents that many of the country’s problems stemmed from “electing the wrong leaders” and called on people to carefully consider their vote.

He said he planned more provincial visits as the next election was drawing near. “I need to explain to people for their understanding,” he added.

Prayut and his entourage also visited a traditional medical centre in the Phana district of Amnat Charoen province, where they were greeted by more than 1,000 local residents. They joined a traditional northeastern dance with a group of locals.

The PM told local residents not to fear that his government would stay on in power.

“Power is in your hands. You all make decisions in the election. Voters will dictate the fate of the prime minister,” he said.