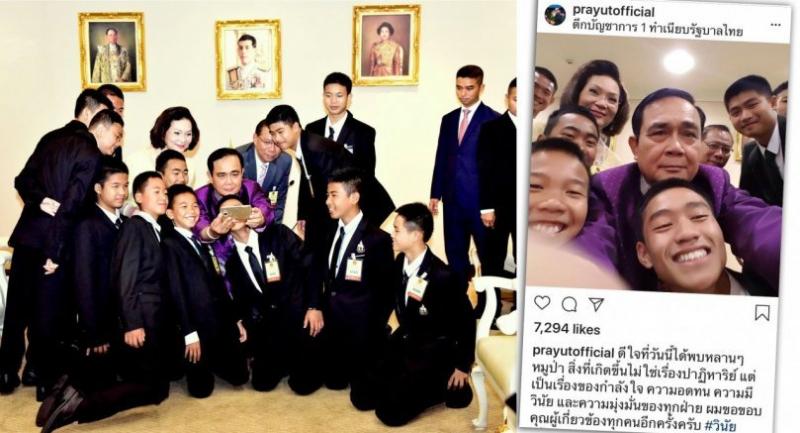 The 13 Mu Pa footballers who |were rescued from a Chiang Rai cave in June present Prime Minister Prayut Chan-o-cha with the Asia Game Changer Award yesterday.

“No matter people’s reactions, it is my decision on whether or not I carry on in politics and how I do it,” General Prayut said after his personal debut in the social media world on Monday, which many perceive as a revelation that he intends to retain power after election.

“[I have to consider] the reasons and how it is necessary for the country and for myself,” he told reporters yesterday. “But the most important thing is how to continue reform efforts and national strategy without getting criticised that I’m clinging to power. This is what I have to be careful about the most.” The junta head also admitted that he was “trying to adapt to the changing situation”. Not only does he have to learn about the digitalised world where the use of social networks prevails, he said, but also how to tolerate comments.

Prayut is notorious for his temper and has several times appeared aggressive in the media. “Do I look [moody] today? I am nice and soft, right?” he said. “But bear with me. Sometimes, my work can be frustrating.”

The junta leader also seemed to have come to a quick understanding of the nature of the online world after having set up Facebook, Twitter and Instagram accounts and launching a website last week. Prayut said he can accept strong criticism, but asked that commentators remain polite.

While the most of the comments have been negative, Prayut said he will try to refrain from taking legal action against their authors.

Apart from a conclusion that recent events prove Prayut intends to remain in politics, critics view his emergence on the Internet as a move to build popularity. That leads to criticism that the junta is being unfair as public comments by other politicians are restricted by the political ban. Prayut argued that other parties also have social media accounts, and asked how he could possibly build his popularity with so many negative comments. While he was coy on his political future, the junta chief yesterday answered questions about how he would adapt, by saying that he would be more transparent and honest.

“My political intention centres around good governance. I cannot do this alone. If I can stay and if you all will join me, you have to follow me,” he said. “We cannot let the past repeat itself. Prime minister is such a powerful position. The fundamental thing is to do it for the people and to leave no one behind. We have to take care of both the majority and the minority.”

Prayut also posted his first photo to Instagram yesterday. It was a selfie of him and the 13 Mu Pa footballers who had been trapped in a northern cave a few months ago.

The rescued boys, along with the head of the rescue operation, former Chiang Rai governor Narongsak Osottanakorn, met with Prayut yesterday at Government House to present him with the Asia Game Changer Award. The award was given to the rescue operation, with the football team representing those involved in it at a ceremony in New York.

Prayut in recent months has met with several celebrities at Government House. In addition to yesterday’s time with the Mu Pa footballers, he met with girl-group pop stars BNK48, as well as lead actors and actresses from the “BuppeSanNivas” series that took Thailand by storm earlier this year.

The moves have been seen as a way to borrow the stars’ fame to boost his personal popularity as the election takes shape. It is currently scheduled to take place in February next year.