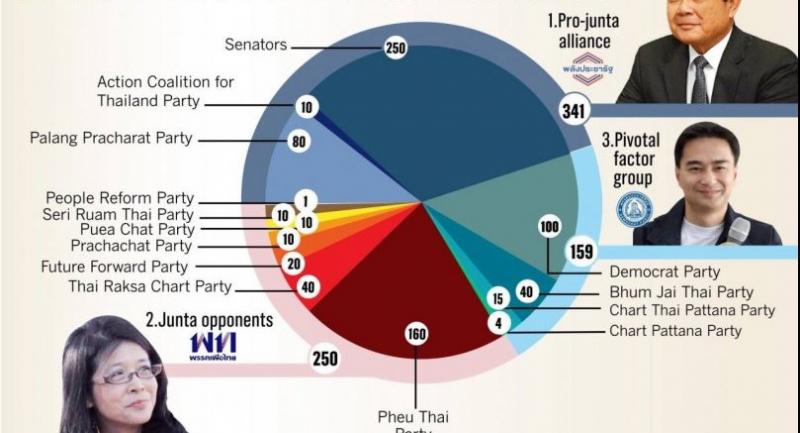 DISPARATE PARTIES TO DECIDE AMONG ARCH RIVALS, THE JUNTA AND PHEU THAI, IN FORMING POST-ELECTION GOVERNMENT

THE POLITICAL scene in Thailand remains bipolar since the 2014 military coup, as the country heads towards a new election – the first since 2011.

Before the generals seized power in May 2014, national politics was largely divided between the side that supported fugitive former prime minister Thaksin Shinawatra and the side that opposed him. The rival group at the time was led by the Democrat Party, which served as the main opposition to pro-Thaksin governments in the pre-coup Parliaments.

Years later, Thai politics remains just as polarised, divided into a side that supports the ruling junta – National Council for Peace and Order (NCPO) – and one that opposes it.

While junta figures recently confirmed that the general election will be held on February 24 as tentatively scheduled, some political observers remain wary of the high likelihood of the date being postponed.

Prime Minister Prayut Chan-o-cha has yet to make his political intentions clear, though four of his Cabinet members have joined the newly set up Palang Pracharat Party, which is expected to propose the junta chief as the next prime minister.

The next elections will take place in completely uncharted waters for all participating political players. For the first time, a single ballot will be used to choose constituency and party-list MPs in a rare voting system known as mixed-member apportionate representation.

This will also be the first time that the Senate will join the House of Representatives to select the prime minister if the Lower House is unable to reach an accord on its own.

Hence, it is likely that even if a political party gains majority support in the 500-member Lower House, it may still end up failing to form the next government.

If the 500 MPs cannot reach an agreement, the 250-strong Senate will cast votes to select the new head of government. The winning side will need to get support from at least 376 parliamentarians to gain a majority.

That could be a really tough task, especially for a party that does not have significant backing from the senators.

All 250 Senate members will be handpicked by the NCPO, though 50 will come from short-listed candidates elected by fellow applicants.

Judging from the current scenario, there will be three major groups after the election – the pro-NCPO alliance, the junta’s opponents and the “pivotal factor” group.

The first group will possibly consist of the 250 NCPO-appointed senators, along with the pro-junta Palang Pracharat Party and its allies, namely Action Coalition for Thailand (ACT) and People Reform.

Palang Pracharat has recruited many former MPs and veteran politicians, though believe their allegiance was won through offers of personal benefits and threats of legal action.

Observers expect the main pro-NCPO party to win about 80 House seats, though the final number will depend on General Prayut’s popularity in the run-up to the national vote.

ACT Party, led by veteran politician Suthep Thaugsuban, is expected to win no more than 10 House seats, mainly from the party-list system.

So, the pro-junta camp is expected to gain about 91 House seats in total. When combined with the 250 senators, it is likely to have 341 votes. However, that is still not enough to catapult their preferred candidate to the premier’s post.

Observers suggest that the anti-junta camp has adopted the strategy of “reproducing affiliate parties” in order to take advantage of the new system in which “every vote counts”.

Under the new system, each vote gained in a constituency will be added up to calculate a party’s share of party-list MPs.

Chaturon said his “pro-democracy” camp aims to win as many as 251 seats to command the majority in the House of Representatives.

In the next national vote, Pheu Thai is expected to win about 160 seats – the largest share in the Lower House, albeit not a majority. Thai Raksa Chart is forecast to win 40 seats and Future Forward another 20, while three other anti-NCPO parties could tally 10 seats each.

So the Pheu Thai-led camp is likely to gain about 250 House seats in total. Though that is very close to a House majority, it would still remain several votes short of the 376 from both Houses that are necessary to select a premier.

The third group -– the “pivotal factors” – may prove crucial for both camps, as the rival alliances alone will be unable to form a new government by themselves.

So a total of about 159 House members spread across the parties in this third group would hold the country’s political balance in their hands.

After the election, the pro-NCPO camp may join forces with all “pivotal- factor” parties to form a new government. But, because it will not command a House majority, the coalition is likely to be unstable, as the rival Pheu Thai-led camp will have an equal number of MPs.

Another possibility is for the Pheu Thai-led camp to form a new government with the support of all “pivotal-factor” parties. Their coalition would have as many as 409 MPs in total.

But many analysts see this option as the least likely, as the Democrats refuse to work with Pheu Thai as long as it remains under Thaksin’s influence.

Pheu Thai may decide to form a coalition government without the Democrats’ help, but for that to happen, it will need a landslide victory.