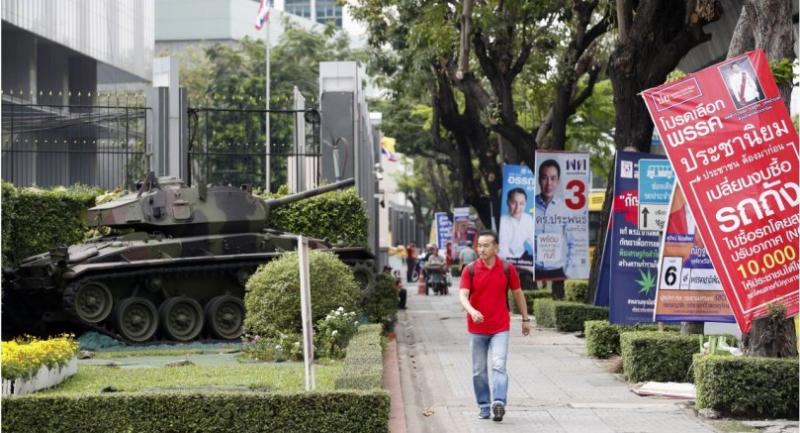 Campagining ahead of the March 24 election is getting livelier – and a little too heated in the view of some observers.

The old habit of rivals slinging mud at one another has revived in several constituencies, prompting critics to raise concerns about the quality of the view of some observers.

“The world has evolved but Thai politicians have failed to develop or employ new, creative methods in their campaigns to attract voters,” said Wilaiwan Jongwilaikasaem, associate dean for academic affairs at Thammasat University’s Faculty of Journalism and Mass Communication. A Thai woman walks next to an electoral campaign poster of Bhumjaithai Party with its policy calling for unrestricted growing of marijuana and proposing cannabis as the country's new cash crop, in Bangkok, Thailand, 14 February 2019. // EPA-EFE PHOTO

She notes that traditional posters and banners were still being used to familiarise voters with the candidates, though some parties are also making good use of social media and info-graphics.

However, she said, there was still a lack of focus on policies and the overall campaign is instead being used to propagate hate speech and smear rivals.

Voters will inevitably have difficulty deciding whether some accusations in circulation are even factual, Wilaiwan said.

“We expect the 7 million first-time voters, including those who have just turned 18, to be enthusiastic about casting their ballots. But what concerns me the most is whether their votes will be ‘quality votes’.” Wilaiwan also wonders whether new voters will be able to play a major role in changing the face of politics, especially given such a short time before election day.

Although some young voters are interested enough to look into candidates’ qualifications and verify whether claims made are true or false, she pointed out that many more are attracted to specific candidates based only on their celebrity status.

The academic cited presidential elections the United States where there are typically only two rivals and they compete on policy. Candidates win or lose depending on what their parties have to offer.

Fugitive former premier Thaksin Shinawatra’s now-defunct Thai Rak Thai Party introduced a slew of populist policies in the 2001 campaign and they’ve remained a signature of the Shinawatra camp, never failing to win elections. In fact, the policies are so popular that the camp has continued winning, no matter what the party’s name, be it the now-disbanded People Power Party or the current Pheu Thai Party.

This time around, though, many other parties are also embracing populist policies.

The main message candidates have been delivering to voters has not changed much, with many parties’ political discourses still “trapped” in either the fight for democracy or populist policies, said Titipol Phakdeewanich, dean of political science at Ubon Ratchathani University.

The Democrat and Future Forward parties are leaning towards populism, while the pro-junta Phalang Pracharat is disguising its policies under the theme of “reconciliation”, he said.

“But in reality, these discourses do not reflect any changes in Thai politics,” he said.

For instance, he said, the Democrat and Future Forward parties are offering a welfare state but have yet to show how it will be sustainable or if recipients would be self-reliant.

Phalang Pracharat Party is relying on the reconciliation discourse to explain why the military is still necessary to maintain order. It doesn’t understand true democracy, Titipol said.

The political discourse used by pro-junta parties is undermining the progress of Thai democracy, he added.

However, he said, though the election is not expected to bring massive change to society, it will at least encourage voters to pay more attention to democracy. A boy sits between electoral posters of Democrat Party during a campaign in Thailand's southern province of Narathiwat on February 16, 2019. // AFP PHOTO

“I think this election is more like a referendum on democracy or an indicator of how desperately Thai voters want democracy, rather than actually returning to true democracy. What we will have is just |pseudo-democracy,” he said.

“This election is being held just so that Thailand can be a part of international democracy. Otherwise it will be difficult for it to promote its economic policies internationally.”

Titipol, who lectures on political communication, said the most important concern was not about what politicians convey to voters, but rather voters being open to two-sided information.

“It doesn’t matter who you support, but you should make time to listen to all opinions so you can make a good decision,” he said.

The easiest way for foreign visitors to recognise that Thailand is going to polls is that urban streets are clogged with candidates’ posters and banners.

This time, however, the Election Commission has barred parties and candidates from buying commercial advertising in print or on radio or television. The aim is to create a level playing field for everyone, so each party now has a slot on TV where it can air its policies.

In previous elections, the poster’s main objective was to remind voters about who was running for which party and under what ballot number. The law now requires candidates, even of the same party, to have their own numbers. It renders the posters useless because they fail to achieve a key task, Wilaiwan said.

“This confusion could lead to many voided ballots in this election. Also, I’m afraid voters will be more easily influenced by canvassers,” she said.

Banners along the streets remain necessary and important, especially for rural voters who have limited access to candidates via other channels such as social media, said Professor Surapongse Sothanasathien, acting chair of the university council at Rajamangala University of Technology Phra Nakhon.

However, he said, the posters being used this time are less attractive even as they seem to follow the same style as in previous elections.

Surapongse, an expert in political communication, said an effective poster displays not just the candidate’s name, face and number, but also the party’s slogan, the constituency involved and the election date. A party’s logo or symbol is also important because it emphasises the party’s stance, he added.

Also, he said, logos of established parties like the Democrats and Pheu Thai are easily recognised and their meaning understood, but those of new parties like Future Forward are difficult to comprehend.

“The angled ‘spearhead’ might look cool and attract young voters, but I don’t understand what message they’re trying to convey,” the professor said. He believes this election season’s campaigns are failing.

“The atmosphere is not as exciting as it should be. Fewer advertisement spots and lacklustre debates [organised by other institutions] have made things not so interesting.”