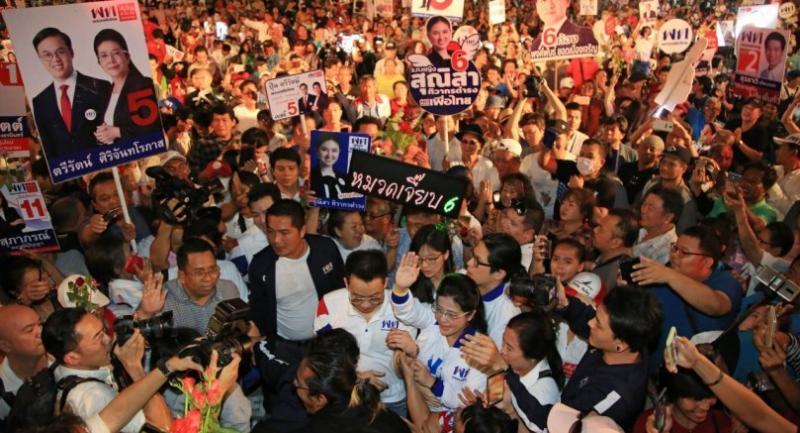 THE PREVIOUS ruling party, Pheu Thai, is expected to win the most number of seats in the House of Representatives in the March 24 general election although it will fall short of the majority, according to a survey by Nation Group journalists across the country.

Pheu Thai is forecast to win 136 MP seats from all 350 constituencies, dominating the North and Northeast, and likely to take all the seats up for grabs from many provinces in the two regions that still have faith in the party’s patriarch, former prime minister Thaksin Shinawatra.

The Democrat Party is expected to trail way behind in second place, tipped to win 88 seats mainly from its traditional strongholds in the South and Bangkok.

The pro-junta Phalang Pracharat Party, which has nominated Prime Minister General Prayut Chan-o-cha as its only PM candidate, is forecast to win the third most number of House seats – 62 – mainly from the North and Northeast. Many Phalang Pracharat candidates in those constituencies are former MPs from Thaksin’s proxy parties – the now-defunct Thai Rak Thai and People’s Power, and Pheu Thai.

Future Forward Party, which is viewed as the darling of young voters, is unlikely to win any seats from constituencies. Its chance rests with the party-list electoral system. The outlook is bleak despite the popularity of the party’s leader, wealthy businessman-turned-politician Thanathorn Juangroongruangkit.

The Nation Election analyses comes from local journalists of the Nation Group, based on their unofficial surveys of eligible voters and insights gained from all 350 constituencies. In the previous completed general election in 2011, Pheu Thai won a clear majority, with 204 House seats from 375 constituencies. The Democrats came a distant second, with 115 House seats, followed by Bhumjaithai (29) and Chartthaipattana (15). Three other parties won a combined 12 seats.

The next Lower House will have 500 seats – 350 from constituencies and 150 from the party-list system. For the first time in Thailand, only one ballot paper will be used for each voter to elect MPs from both constituency and party list, under a mixed-member proportional representation electoral system.

Pheu Thai will likely continue to dominate the Northeast, which has the most number of House seats – 116. The party’s expected victory in 67 constituencies, however, will be far lower than the 104 in the 2011 election. Its candidates are expected to sweep all the House seats in Nakhon Phanom, Bueng Kan, Mukdahan, Yasothon, Si Sa Ket, Sakon Nakhon, Nong Khai, Nong Bua Lamphu and Udon Thani provinces.

Other House seats in the region are likely to be shared mainly by Phalang Pracharat (25) and Bhumjaithai (13).

In the Central region, which has 92 House seats this time, no single party will be able to dominate. Pheu Thai is expected to win 25 MP seats, followed closely by Phalang Pracharat (23), Democrats (17), Bhumjaithai (13), and Chartthaipattana (10).

However, in the North, Pheu Thai looks set to dominate again. The defending champions are expected to win as many as 36 of the 62 available seats. They will likely be followed by Phalang Pracharat (13), Democrats (seven), Thai Raksa Chart (three), Bhumjaithai (two) and Chart Pattana (one).

The South, which has 50 seats up for grabs, will likely remain a stronghold of the Democrats, who won in 50 out of 53 constituencies in the 2011 election. This time, the Democrats are expected to win 40 House seats. The 10 remaining seats are expected to be shared by Action Coalition for Thailand (four), Bhumjaithai (three), Prachachart (two) and Phalang Pracharat (one).

The Democrats have the potential to sweep all House seats in Nakhon Si Thammarat, Trang, Phang-nga, Phatthalung, Phuket, Songkhla and Surat Thani provinces.

In the capital, the Democrats will likely dominate again. They have the potential to win 22 out of the 30 House seats, leaving the remaining eight to arch rivals Pheu Thai.

Other parties are unlikely to have much of a chance in Bangkok, which has been a battlefield for the Democrats and Thaksin’s parties. But the Democrats have dominated the city’s elections since Thaksin’s first party Thai Rak Thai contested in 2001.