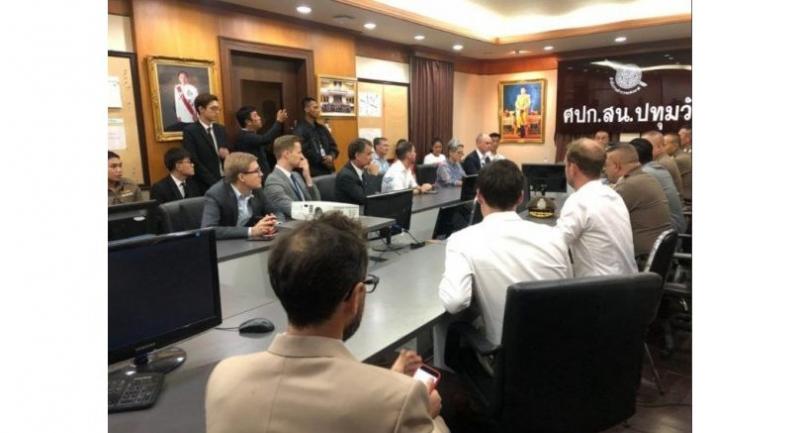 The Foreign Ministry called on foreign missions in Thailand to prevent a recurrence of diplomats getting involved in what is considered a domestic political issue.

The ministry’s deputy permanent secretary, who is responsible for bilateral relations, passed this message on to the diplomatic corps between April 10-11, according to a ministry statement.

The senior official separately met ambassadors and representatives from the embassies of France, the Netherlands, the United Kingdom, Germany, Canada, Australia, New Zealand, the United States of America, Finland, Belgium and the delegation of the European Union.

In the meeting, he expressed “disappointment and concern” about the presence of diplomats at the police station.

“In particular, the embassies’ action was seen as a show of moral support for Thanathorn as well as taking of sides in Thai domestic politics,” the diplomats were told.

“This action is clearly beyond the functions of a diplomatic mission, an interference in Thailand’s internal affairs, and in breach of Article 41 of the 1961 Vienna Convention on Diplomatic Relations. The ministry therefore urges the embassies to prevent a recurrence of such actions in the future.”

Despite this request, many embassies later issued statements defending their representatives and their action.

Later the ministry issued a second statement justifying the procedure that will see Thanathorn being tried in a military court – an act that has been criticised by the diplomatic community.

Thailand, like many other countries, including the UK, the US and several European countries, have been using the system of military courts, the statement said.

“Although practices may differ between countries, military courts are not established with the purpose of targeting particular individuals.

“The military courts form part of the judicial system under Chapter X [the courts] of the Constitution of the Kingdom of Thailand, which also includes the Courts of Justice and Administrative Courts.

“The Constitution also affirms the principles that trial and adjudication of cases must be carried out in accordance with the laws and in the name of the monarch, and judges and justices are independent in trial and adjudication of cases, in accordance with the Constitution and laws in the expeditious and fair manner, and without any partiality,” the statement read.

Under the junta’s orders, legal proceedings against persons accused of committing certain offences under the Criminal Code before September 12, 2016 will be subject to the jurisdiction of military courts.

Thanathorn’s allegedly committed the offences in question on June 24, 2015.