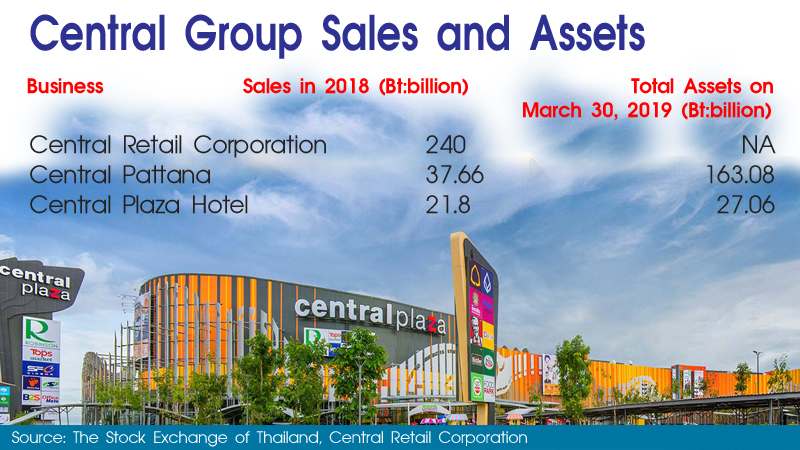 With the plan to list Central Retail Corporation (CRC) on the Stock Exchange of Thailand this year, Thai conglomerate Central Group will have its three core businesses listed on the SET with market capitalisation at more than Bt700 billion, or about four per cent of the bourse’s Bt17.67 trillion market cap.

The Central Group had humble beginnings. In 1947 Tieng Chirathivat and his son Samrit Chirathivat set up Central Trading for the sale of books, fashion products from the domestic market and imported products such as dresses, shoes, shirts, etc at Soi Charoen Krung.

Seventy-two years later, what began as a small shop has expanded into the Central Group, encompassing three major businesses.

The first is CRC, the flagship business of the group, that has been in operation for 72 years. As of March 31, CRC operated 1,979 retail stores in 51 provinces. The company also owns 134 retail stores in Vietnam and Italy with sales valued at Bt240 billion.

The third is hardware, which includes Thai Watsadu, Baan and Beyond, Power Buy and electronics chain Nguyen Kim in Vietnam, which generate 22 per cent of CRC’s revenue.

The next giant in the group is property developer Central Pattana Plc, which operates shopping centres and residential projects both in Thailand and Malaysia and has total assets valued at Bt163.08 billion as of March 31.

The third business segment of the Central Group is hospitality. Central Plaza Hotel Plc operates hotels under the Centara brand. In addition to Thailand, the chain is expanding overseas with assets valued at Bt27.06 billion as of March 31.

Since inception, the Central Group has been managed by the Chirathivat family, from the first to the third generation, with the stage set for the fourth generation to take the reins.

“It is difficult for a family business to be managed from the first to the third generation with constant growth, and without any conflict among family members,” Dr Somchai Pakapaswiwat, an economics and politics indipendent acadaemic,  told The Nation.

But the Chirathivat family has managed to remain united and driven the group’s business, which is different from other families in Thailand, Somchai said.

He explained that the Chirathivat family has a family council, which manages the family members and ensures benefits to all. The family also has a business committee, which is open to outsiders and operates separate from the family council.

“Having a family structure and an organisation that is open to both family members and outsiders with ability has helped drive business growth over the long term,” he said.

The family has also been successful in selecting the group’s leader from the second to the third generation, enabling them to be ready for change in customer behavior and push diversification to match customer demand.

That explains how the group, founded as a shopping centre, diversified to embrace food, lifestyle, hospitality, and property.

While retail remains its core business, the group is now ready to move into digital and e-commerce business.

“The key to the success of the Chirathivat family comes from the strong family structure,” says Somchai.

Currently, the key person driving the growth of CRC is Tos Chirathivat, from the third generation of the family. He is the son of group co-founder Samrit Chirathivat and the grandson of founder Tieng 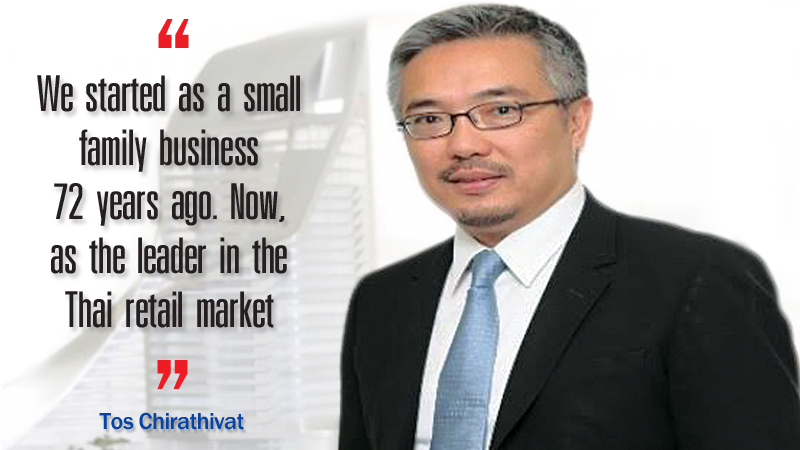 “We started as a small family business 72 years ago. Now, as the leader in the Thai retail market, we operate a wide range of multi-format stores, ranging from the first department store in Thailand to other retail outlets with diversified formats, including specialty stores for specific products. Furthermore, we have added value to our offline channel with the launch of Omnichannel strategy to cater to consumers’ shopping behaviour in every dimension,” Tos, chairman of CRC’s executive committee, said at a press conference last week when he announced the plan to list CRC on the Stock Exchange of Thailand this year.

“The Central Group positions itself as the “Central of Life” for all our stakeholders. We will continue to revolutionise our platforms in order to create a ‘Central Experience’, offering a unique, frictionless proposition throughout a customer’s journey," said Tos.

He has played a key role in devising the strategy that transformed Central Group from a domestic firm into a regional and global firm by expanding investment, opening and acquiring major stakes in shopping centres in Vietnam, Malaysia and Italy, after steering the group through the 1997 economic crisis.

In 1997, the Central Group was one of the conglomerates impacted negatively by the crisis. But the group has learned its lessons and marched on.

“We are expanding overseas because we want to balance our portfolio and create sustainable growth for our group,” Tos said recently.

It is generally a challenge for family businesses to remain united, especially when the reins pass on from the first to the third generation. But the Chirathivats are a good example of a strong family that has shown the ability to grow the family business through all crises and challenges, Somchai noted.