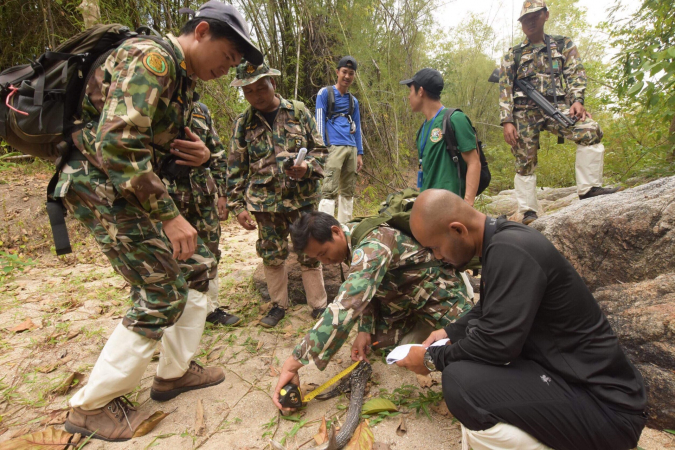 As a park chief himself, Soeung Khemarak, the deputy director of the Oyadav National Park in Rattanakiri province, fully understands the problems faced by Cambodia’s Kulen Prum Tep Wildlife Sanctuary and adjacent parks near the border with Thailand where bombs, illegal logging and poaching are part of daily life.

The situation is similar further inland in Srepok Wildlife Sanctuary, a last bastion for Cambodia’s tigers and to which the big cats are about to be reintroduced to replenish the population.

Khemarak has long hoped that these threats to Cambodia’s forests could be offset if Thai and Cambodian park rangers were to jointly patrol the protected areas close to the border, but has yet to see such cooperation become a reality.

What is more feasible, he says, is the SMART Patrol System, a photo-based technology that uses NCAPS (Network Centric Anti-Poaching System) to patrol the parks.

“I saw them using camera traps to capture tigers and their migration. And they used them to take photos of poachers too, and linked them to the internet. This is not just about getting the materials, but the way you train rangers in using these technologies,” he said.

“In my province, we don’t have advanced technology like that. We started to learn about SMART Patrol System a few years ago and we know that it can help collect data and be applied to our decision making, which is important. If we had cameras like that, they would help a lot. Some non-profit organisations may be of help or perhaps I can find alternative materials. If not, we will have to stick to the old way, dispatching our men to chase the poachers,” Khemarak 39, told The Nation on the sidelines of the International Conference on Strengthening of SMART Patrol System in ASEAN held early this month.

Khemarak was one of the 70 high-ranking officials and park chiefs from 8 Asean countries, who along with observers from international conservation organisations, were invited by Thailand to participate in the conference, the first time that high-ranking officials had come together to discuss protection for Asean forests through the SMART Patrol System.

The participants also looked at possible cooperation in this era of heightened trans-boundary threats. 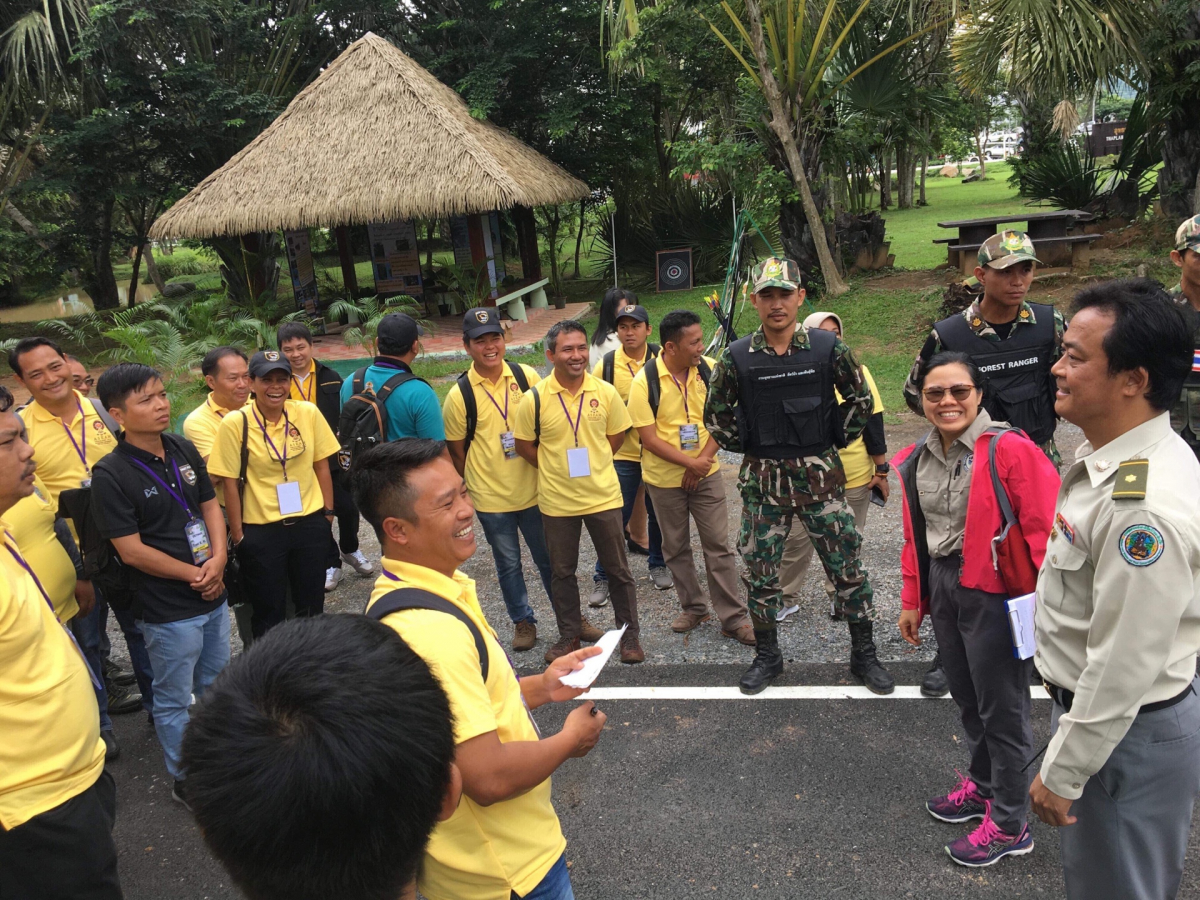 The SMART Patrol System has been around for about a decade though its results were nowhere as efficient as they are today. Using well-planned patrols, geographical technology like GPS and systematic recordings of forest resources and wildlife as well as the threats to them, facts and information from the field are systematically collected then processed and analysed.

This creates a large database of the problems and threats to protected areas and suggests appropriate planning and management, sophisticated forest protection and supportive law enforcement systems against forest and wildlife crimes.

Perhaps ironically, the system was born out of a tragedy that occurred in the early 1990s at Huai Kha Khaeng Wildlife Sanctuary, which later became the country’s first natural world heritage site.

In a recent interview with The Nation, Dr. Anak Pattanavibool, Director of Wildlife Conservation Society-Thailand Programme and a co-pioneer of the SMART patrol, spoke about the development of the system. He explained how, in the late 1980s, the chief of Huai Kha Khaeng, Seub Nakhasathien, had put together the documents needed to propose the site, along with the adjacent forest tract of Thung Yai Naresuan, an area of some 6,400 sq km that forms the heart of the Western Forest Complex, for nomination as a World Heritage site.

Seub committed suicide after completing this work, leaving as his testament his efforts to protect this vast forest tract and its heart by putting them together under the same ecological protection umbrella.

His vision and dream has since been carried on by his successors, including Chatchawan Pitdamkham, who followed Seub as park chief as well as Dr. Anak, As a manager of the Western Forest Complex project in the early 2000s, Chatchawan first attempted to connect Wefcom’s scattered 17 wildlife sanctuaries and national parks.

He introduced ecosystem-based management to the areas and initiated “smart patrolling” to protect them, using new technology including GPS along with systematic monitoring and reporting. Forest rangers were trained but the work was discontinued after the project finished, partly because there was no computer program available to support systematic data collection for further planning and management.

A further attempt was made when Chatchawan returned to Huai Kha Khaeng in the mid-2000s and in this he was assisted by Dr. Anak, before he left Wefcom to direct WCS Thailand. Through his contacts with staff at the Southeast Asia office for the Monitoring of Illegal Killing of Elephants (MIKE) programme under the Convention of International Trade in Endangered Species (CITES), which addresses issues around trade in endangered species Dr. Anak was able to obtain a modification of the law enforcement monitoring program and database that they used to track illegal elephant killings.

From MIKE, the computer program was shifted to MIST, before leading conservation organisations stepped in and helped further develop the program into the current flexible SMART (Spatial Monitoring and Reporting Tool) forest protection system, which is able to monitor various species and threats.

The “SMART Patrol”, as it was named by Chatchawan, has become known among and further developed by the global conservation community. Other related frameworks were then shaped to fit the Thai circumstances, including patrol patterns, resulting in the new forest protection system that is unique to Thai forests. According to Dr Anak, Huai Kha Khaeng’s forest rangers were the first to be trained to use new technologies like GPS, along with systematic working procedures, so that they could collect, record and report in detail the critical factors in the forests, including threats to wildlife.

Huai Kha Khaeng became the SMART Patrol site for training rangers from other nearby protected areas, and as its reputation continued to grow, drew attention from international community, including the Smithsonian Institute and the Global Tiger Initiative, which sent rangers to receive the Smart Patrol training here.

According to the SMART Partnership Annual Report 2018, the SMART Patrol System has been adopted and applied by more than 675 conservation sites worldwide, with 14 countries having adopted it at a national level, including in this region Thailand, the Philippines, and Malaysia. 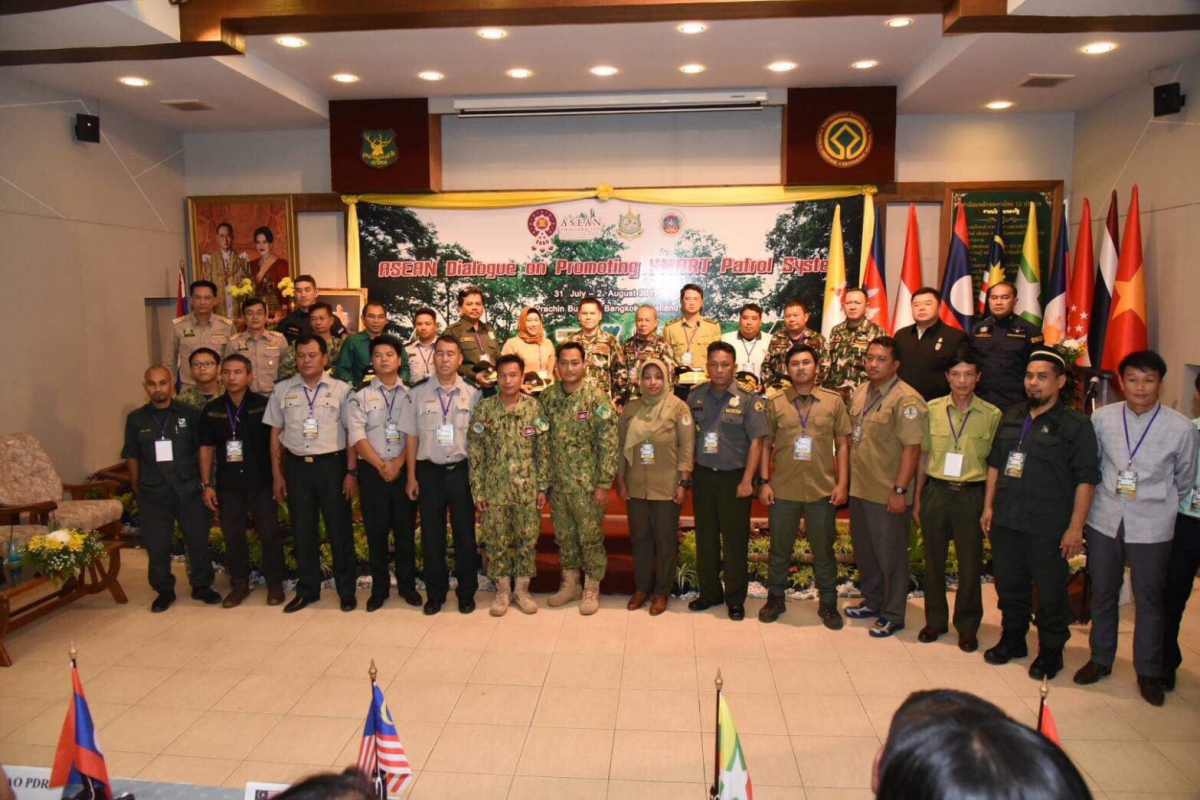 Participants at the recent conference discussed the SMART Patrol System and its application at length, noting that while it been applied to protected forests across the region, this has been to different degrees and at different levels.

Mostly, it was still being applied at a site level, meaning the supposed protected areas were not yet well covered. This is particularly true in Indonesia where despite the protected areas being similar in size to those of Thailand, the number of forest rangers is low. Malaysia too is short of staff and needs support from its army.

The situation is not all that different in the Greater Mekong sub-region, with SMART Patrols still held at a site level.

Lao PDR and Cambodia have just started exploring the scheme in some of their protected areas, like at Nakhai- Nam Thuen in Laos, or Srepok in Cambodia. Thailand, on the other hand, has made such great strides in applying the system that the National Parks, Wildlife, and Plant Conservation Department has adopted it as part of its reform plan.

The Thai SMART Patrol has also been incorporated in the national reform plan on natural resources and environment as well as the national 20-year strategy. So far, some 204 protected areas nationwide have adopted and applied the system, with committees regularly performing assessments to improve the quality and standard of the system.

“Regionally, the SMART Patrol System is still pretty much site based, and requires the support of international conservation organisations. Here, we have managed to integrate it with our work at a national level, providing a blanket of protection to our forests. It doesn’t matter whether you can replenish the population of key species, like tigers. The point is the animals must be able to survive, and they can survive with strong protection. That’s why we have started to look back to how we have progressed and why we need to come together with our neighbours to exchange knowledge and ideas,” said Sompong Thongsikhem, the DNP’s SMART Patrol Center’s director.

The participants from Indonesia and Malaysia expressed concern about the different degree and level of forest protection and application of SMART Patrol System in each country. In their view, this could drive poachers to places where the protection is weaker.

To address this, informal communications between officials has been proposed to allow them to keep up with the threats, especially of trans-boundary crimes.

Sompoch Maneerat, a former chief at Huai Kha Khaeng Wildlife Sanctuary, who has confronted trans-boundary crimes in the area, said wildlife problems and threats in the region were not very different, as the people shared common traits, ways of life, traditions and beliefs.

The threats, be they losses of wildlife habitats, poaching, and consumption of wildlife , remain prevalent, and are increasingly crossing boundaries, thus posing a new challenge for forest rangers in Asean. Stepping up efforts in forest protection so that these are at the same level as well as creating a network will help keep up with the challenge, Sompoch, who is now also the DNP’s key man of the department’s reform work and spokesperson, suggested.

Dato’ Fakhrul Hatta bin Musa, Deputy Director General (Conservation) of Malaysia’s Department of Wildlife and National Parks, said he felt that open-minded and informal talks among officials was the best approach to tackling the problems.

“We are in a fight against the illegal wildlife trade which is second only to weapons, drugs, and trafficking. Each country has the duty to work on this to the best of its ability,” he said.

Dr Anak said his main hope was that the talks would inspire young rangers, especially those coming from areas where protection for forests is still weak, to want to do more for their forests and wildlife. “We are ready to share our knowledge with them and help train them,” he said.

Khemarak too is optimistic for the future.

“Considering the threats we face, it is necessary to find ways to work together or at least maintain the same standards. A trans-boundary meeting like this, once a year, is a good start” he said.