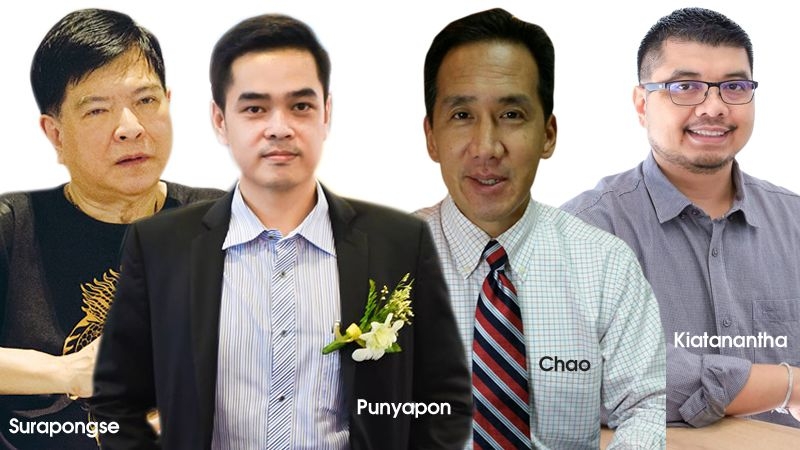 Technological disruption has had a major impact on many business sectors, including the mass-media industry, which is forcing most mass-media organisations to make adjustments to cope with the changing landscape and cater for paperless consumers.

Professor Surapongse Sothanasathien, chairman of the university council at Rajamangala University of Technology Phra Nakhon (RMUTP), said media organisations will only survive difficulty by adjusting their content so it is appropriate for new digital media. They also have to move the centre of contents from “sender” to “receiver”.

“In my experience, I have learned that journalism has never died despite the disruption. It’s just that media organisations and reporters are unable to survive because they cannot adjust to changes,” Surpongse said.

He added that mass-media organisations should stop relying on content raised in social media, but instead follow these stories, add value and create good related reports themselves, noting that social media is not the final answer.

He explained that with the fall of traditional media, mass-media organisations need to gradually move to new media formats. For instance, many European countries no longer have traditional television, but instead consumers rely on podcasts and video streaming to access preferred content when and where they want.

Larry Chao, managing director of Chao Group Limited – a consultancy on organisation change – said that last year, for the first time, the daily consumption of digital media accelerated past traditional media with more than 50 per cent of overall time spent. Since then, digital media has supplanted traditional media and now defines the industry. Media agencies that have not come up with clear strategies to harness digital media risk being left behind, he warned.

Chao pointed out that digital media has created at least four major disruptions in the media landscape. First, digital media is rapidly replacing print, as evidenced by the gradual disappearance of print media, including the print edition of this newspaper earlier this year. With the cost of digital media dropping and digital devices like mobile phones improving access to news and information, digital media has rendered print media obsolete. In fact, in order to compete successfully, media agencies will need to tailor their offerings according to each online distribution channel. For example, how they communicate with the mass market on Facebook is different to how they might engage executives on LinkedIn.

Second, digital technology has spawned the development of digital media entrepreneurs, who have created a proliferation of media content. With low barriers to entry and readily available conduits to distribute their material, it is only a matter of time before they start eating into the market share of traditional media players that have relied on in-house creativity and production. Existing media agencies will need to decide how to compete with this influx of agile competitors, or better yet, how to leverage their capabilities as outsourcing partners.

Third, the digital industry has been a boon for video content and technology. Consumers nowadays have an attention span that lasts a few seconds compared to a few minutes in the past, so media agencies should learn to capture their attention quickly, or they can lose them. This has forced many media agencies to re-think the way they share their clients’ products and services with consumers. Perhaps the answer is a combination of capturing the audience’s attention with snippets of enticing digital media, while continuing to search and innovate other non-media sources of communication.

Fourth, with so much digital media bombarding audiences it is not surprising that people have grown wary of what they see and believe. Clever artificial intelligence had created media content dubbed “deep fake”, which fooled people initially but has now started raising suspicion. To win over consumers, media businesses will need to convince them that what they are portraying is genuine and not just a lot of bells and whistles. The quality, creativity and relevance of media content and the products and services they represent will also be vital.

“To adapt to the disruptions and come out ahead, media agencies need to be crystal clear about their strategies and what they expect from their investments. The current frenzy surrounding digital media disruption reminds me of when US president Richard Nixon first opened the door to China in 1972. At that time, companies were climbing over each other trying to get a piece of the ‘China action’. Investment dollars haphazardly poured into the country hoping something would stick. But in the end, results were underwhelming and companies learned the dangers of overpromising without clear strategies,” Chao said.

He said the same caution holds true today for media agencies. Before making huge investments in digital media, it is crucial to define the benefits and desired results. For example, what do you really want to get out of your digital transformation? Are your initiatives scalable? Will they enhance consumer experience? How will you measure success?

“Despite the urgency to embrace digital media, it is important for media companies to step back and assess how they need to proceed before being swept up by the digital current,” he noted.

Kiatanantha Lounkaew, a lecturer at Thammasat University’s Faculty of Economics, said the advent of digital technology has had three disruptive effects on media industry.

Firstly, the boundary between content producers and content consumers has been eliminated. In a world where a person can be both on the supply and demand side of the market, traditional economic logic is not applicable anymore. There are no easy answers to simple questions like how to price or how much content to produce or who to market it to.

Secondly, size, resources or even regulatory protection from the government are no longer effective barriers. With smartphones connected to the internet, anybody can become part of the media industry. This is why media powerhouses have found themselves on the same playing field with small content creators competing for the same audience. While small operators are agile, media giants have to fight on two fronts – a head-on battle with big media as well as fighting guerrilla warfare with tiny competitors. To complicate things further, these small competitors are also often consumers.

The last effect is shifting the market power to the hands of customers. Traditional media prides itself for being able to mass-produce content for a large group of consumers. Digital technology, meanwhile, enables consumers to tailor the selection of content to meet their appetite. Hence, mass media is no longer the mantra for success in this new landscape.

“It is understandable that, when faced with unprecedented challenges, most traditional media giants chose to respond in the same manner: cutting cost, developing digital platforms and offering a mixture of content with the hope of maximising on the number of consumers. But a strategy used by everyone cannot be called a strategy, it’s just a rat race. Big media still have an advantage over small competitors on several fronts. For instance, experienced crew means better content quality, while well-recognised brands can also be an asset in terms of attracting audiences. They have a network of people and resources that small media do not have access to,” Kiatanantha said.

He added that small media providers are fast, but they can’t offer in-depth analyses. Plus, small media operators are situational – their interests are based on events that have the prospect of attracting mass attention. Once they succeed or fail with that, they will move on. They do not have sufficient resources to stick to a certain issue for a long period of time. Also, many of them cannot produce several pieces of high-value content in a short period of time. Big media should exploit these loopholes to their advantage. Counter speed with accuracy. Counter superficiality with enriched content. Counter copycats by making content their signature.

“The time ahead will be challenging for everyone in the media industry. Disruption is simply an unanticipated storm. To withstand this digital storm, you need balance between strengthening your core competency and trying to be more flexible. Doing otherwise might open the door to catastrophe,” Kiatanantha said.

Punyapon Tepprasit, chief executive officer of MVP Consultants and post-graduate lecturer on industrial management at Ramkhamhaeng University, said the disruption of media organisations has been continuous, beginning from the advent of and rising access to the internet.

“Humans have always wanted to keep up-to-date, and now they want to do that quickly. Traditional media formats cannot satisfy this need like online media can, with the latest news just a click away. Also news can be accessed conveniently and at a lower cost than other platforms. This disruption caused by changing consumer behaviour and the advent of many new technologies has become a big problem for media organisations,” he said.

Punyapon said changing consumer behaviour has resulted in a change in the behaviour of mass-media organisations. The most important thing that will help media organisations to be able to adapt in this time of disruption will occur in the future, when each phase of corporate communication is adjusted to create market awareness and behaviour as well as the needs of the consumers.

Meanwhile, external communication must target consumers or audiences more by using the concept called “co-design”. This is in collaboration between the organisation and the target consumer in order to reach their needs such as by conducting research via their own purchase platforms in the form of polls or collecting information for reading and viewing news. The customers’ needs can be analysed and demands can be ranked by clustering target groups in line with their behaviour and preferences to create news that can meet the needs of customers or audiences.