Thailand could improve its competitiveness among nations by tackling its weakest points – a lack of critical thinking in teaching, failure to dominate any markets, and unsafe drinking water, according to Switzerland-based World Economic Forum. 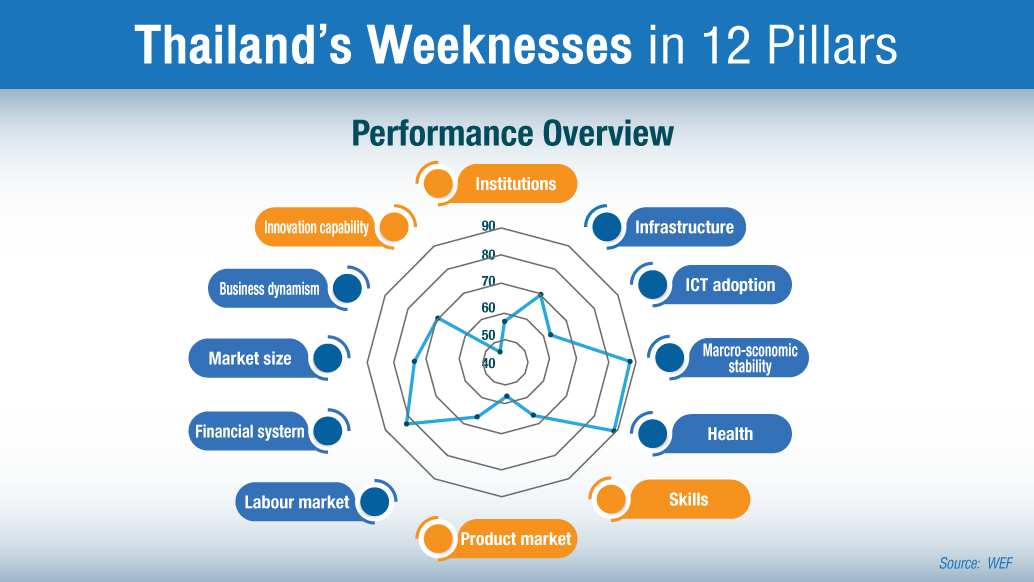 Thailand’s ranking among 141 economies has dropped to 40th place from 38 in 2018 in the just-released WEF Global Competitiveness Index.

place, according to a survey by the WEF, which seeks to promote public-private cooperation.

Kobsak Pootrakool, deputy secretary-general to the prime minister for political affairs, on Wednesday (October 9) acknowledged Thailand’s ranking slipping even as some scores rose. “It’s like a running competition – if our pace is slower, others will overtake us, so we have to run faster,” he said.

Assistant Professor Wilert Puriwat, dean of the Chulalongkorn Business School, which is allied with the WEF, said that, If Thailand wants to improve its ranking, labour skills must be improved.

“The survey found that skills among new university graduates have declined, especially in the area of critical thinking,” he said.

The way students are taught needs to change, he said, noting that Thailand’s score on critical thinking in the classroom was the world’s lowest at 37 out of 100 points. In assessing skills possessed by the future workforce, the survey names Finland first for critical thinking in teaching, with 89 points.

“We’ve failed the exam and it can’t be fixed by simply retaking the test – we need to restart learning,” Wilert said, alluding to Thai students routinely performing poorly on tests compared to foreign counterparts, a lag blamed on the traditional reliance here on rote learning through memorisation.

The WEF urged Thailand to encourage creative and critical individual thinking in the classroom instead.

Noting the only a few large Thai companies dominate the domestic market, muscling aside smaller contenders, Wilert said Switzerland provides a model for spreading dominance among many firms by helping smaller ones gain market share. Switzerland ranks first in the sharing of market dominance, he noted.

“This will take time since the few big firms have dominated the market for so long,” he said.

Although tap water has become widely available widely across the country, it is not as safe to drink as that found in developed countries, said Wilert.

In the third, product markets, the labour market, the financial system and market size are compared. Fourth is the “innovation ecosystem”, which looks at business dynamism and capacity for innovation.

In all there are 103 separate factors examined for which up to 100 points can be awarded.

Thailand’s 68.1 GCI ranking places it in the top 40 among the 141 economies surveyed, but it it progressing more slowly than other countries, Wilert noted. 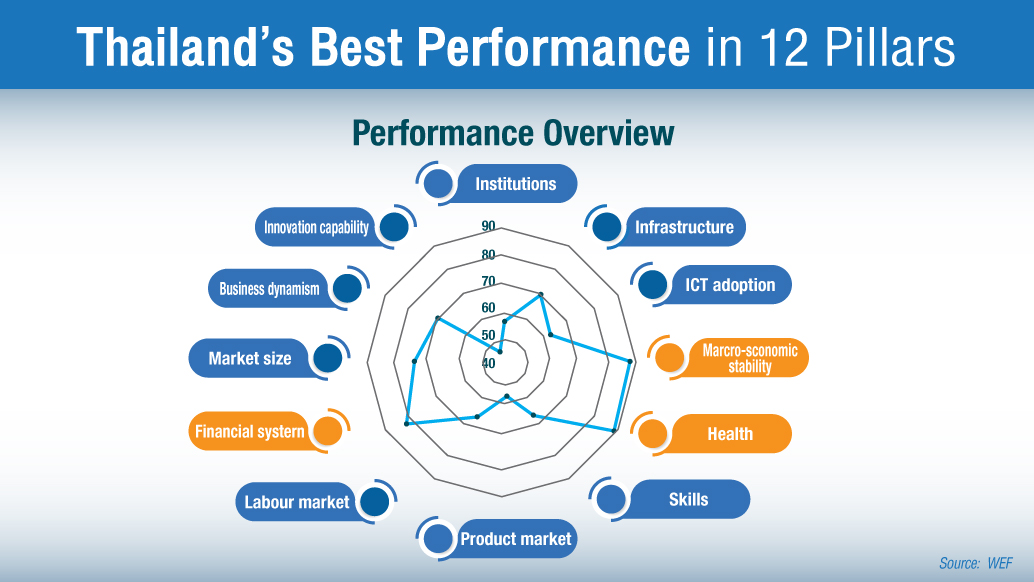 Its identified weaknesses are in institutions, innovation capability, product markets and skills. Its strengths are the financial system, public health and macro-economic stability.

The score for institutions dropped from 55.1 in 2018 to 54.8 this year, the ranking from 67 to 60. Corruption and an inefficient legal framework for challenging regulations were the key damaging factors, the WEF said.

The score for infrastructure fell from 69.7 to 67.8 and the ranking from 71st to 60th place due to continued reliance on an inefficient railway service.

“Improvement in the rankings will come if there is rapid progress in several areas, such as reducing corruption, improving infrastructure and workforce skills, and boosting the level of domestic market competition,” Wilert said.