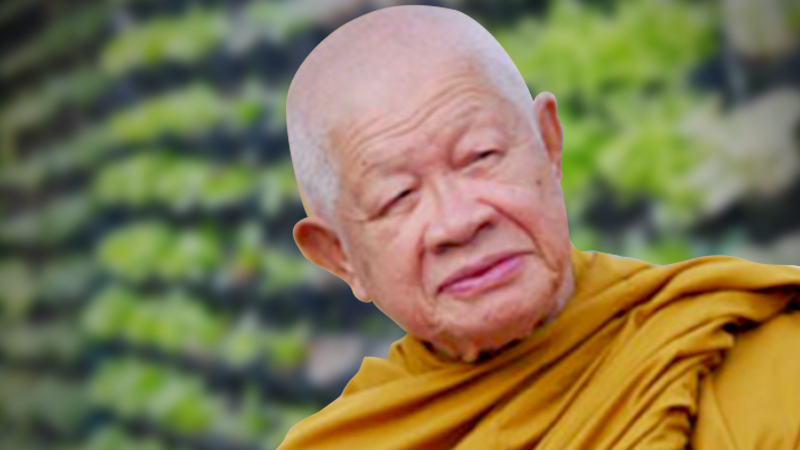 Meditation master Luangphor Viriyang has turned 100, but his physical and mental health allow him to continue teaching mindfulness meditation to both Thais and foreigners.

Luangphor Viriyang was born on January 7, 1920 in Saraburi province, in central Thailand, and entered monkhood when he was still a boy, with a vision to help others across the globe.

His spiritual life as a Buddhist monk has been an extraordinary journey for himself and beneficial for large numbers of people both in Thailand and abroad.

When he was young, he worked so hard to support his family that he fell seriously sick. He collapsed and could not get off his bed.

“Luckily, I had learned some meditation before I became severely ill so I could keep my spirits up,” he recounted to his devotees who had gathered on his centenary on January 7.

He said he pledged to help the world if he recovered from the illness. So, after the recovery, he entered monkhood as he thought that would be the best way to help other people.

When he entered monkhood, he said he was groomed by some really good mentors. The most influential one was the late venerable Luangpu Mun, whose influence on meditation practices remains felt even today in Thailand and abroad.

He recounted that during World War II, he and his first Buddhist monk mentor, Achaan Gong Ma, had gone on a three-month trip from Chanthaburi province in the eastern part of Thailand to Sakon Nakhon province in the Northeast to meet Luangpu Mun, walking most of the way.

After spending four years with Mun, he was assigned to travel to Bangkok in order to spread the meditation practice in the capital.

He has become one of the great meditation masters, who has taken the knowledge to ordinary people. Once he said that he used to teach meditation to monks but he found that when they left the monkhood the knowledge of meditation also disappeared. He said that was the reason behind his move to take meditation practices to the public at large.

He has taught thousands of people via his temple and affiliated temples in Thailand, Canada and recently in the United States.

Today Buddhist mindfulness meditation is popular in Thailand and around the world as people practice to increase their well-being, enhance their productivity at work and lessen stress from demanding work and stressful life.

Monks, teachers, psychologists or medical personnel today have applied different methods of meditation to achieve peace of mind. Luangphor Viriyang teaches his devotees mainly walking and sitting meditation. Beginners are advised to repeat a word, or a mantra “Phuttho”, in order to quiet their monkey-like minds. People are taught to follow the rhythm of their breath in order to achieve a peaceful mind and relaxation. Phuttho means the one who enlightens.

He has designed several meditation courses, from one-day to six-month events.

Luangphor Viriyang often reminds practitioners that practising mindfulness meditation will improve our mental well-being and it will act as an auto-brake in preventing us from inflicting harm on each other.

He emphasises that people should take time to meditate every day, at least 5 to 15 minutes, to strengthen their physical and mental well-being.

“Simply do it whether you want to do it or not,” he often says.