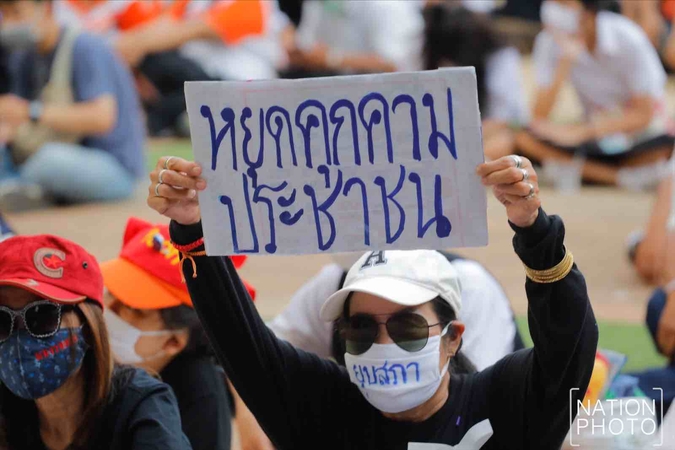 The ongoing youth-led protests has wide implications for the country and it has left many, especially those from the old generation, shocked.

It may have been triggered by politics, but as the pro-democracy protests evolve, it has expanded to also impact the core values of Thai society.

By expressing their opinion about the role of the monarchy, the recent protests have touched on a sensitive issue, which has always been a taboo in Thai society. There may not be a consensus among protesters, but many are using code-language for communication and some are disguising their messages with subtlety on their protest banners, to voice critical views about the monarchy.

The military-backed government led by Prayut after the 2014 coup launched 12 core values for Thais, largely instructing people to follow the rule of authority, uphold traditional institutions and what is perceived as Thai culture. Liberals had criticised the 12 values as a tool of the military to brainwash people or an attempt to drag Thai society into the deep past.

Now, the political tide has turned and demonstrated that the military's attempt to promote their 12 values has failed. Even school children are questioning school discipline on hairstyle, opposing traditional values that pupils must respect teachers. University students have raised questions on how the country is run, opposing the value of showing respect to traditional institutions.

Seeing potential threats to students who are joining the protests, the Thai Academic Network for Civil Rights  recently expressed its support for peaceful demonstration and freedom of expression.

The network has urged parents and teachers to support the civil rights of the students.

New values have now obviously taken hold in the minds of the young generation.

Tolerance is another value of a democratic system that is hardly found in an authoritarian culture.

The hierarchical system does not tolerate, or has low tolerance, for those who have different opinions or those who raise questions about Thai traditional institutions.

Prayut often bristles when reporters or opposition MPs fire tough questions at him.

Among the general public, especially among the old generation, Thais tend to avoid vigorous face-to-face arguments. They simply stay silent or make jokes about the subject of discussion, as an attempt to avoid confrontation or save face of their friends, seniors or their bosses.

Transparency is needed in a democratic system, but we do not expect it in any system ruled by the military or dictators. It is widely believed that Thais who speak the truth could land themselves in trouble. For example, Army Sergeant Narongchai Intharakawi, a whistle-blower on corruption in the military, is currently being allegedly targeted by Thai authorities. This incident suggests severe flaws in the judicial system which punishes those campaigning for transparency.

Fed up with murky double standards, and nepotism practices of the current government and state agencies, more protesters have joined the youth-led protests.

Accountability is also demanded by protesters. Youth and pro-democracy groups have raised questions on how tax money is spent. In their view, Thai laws and the current political system have obviously been obsolete, allowing those in power to easily abuse their powers. How can people holding high profile positions be held accountable while their freedom of expression is limited by draconian laws? Worse, the judicial system is not on the people's side, according to pro-democracy groups.

One example of flawed accountability was the high-profile case of how Deputy Prime Minister General Prawit Wongsuwan escaped the luxury watch scandal unscathed, while people questioned the handling of this scandal by the National Anti-Corruption Commission.

Lack of integrity in senior Thai officials is a serious problem plaguing the country. The latest case of the Office of the Attorney-General dropping all charges in the alleged hit-and-run case against Vorayuth Yoovidhya, heir of a Thai super-rich family, reinforces the public grouse of Thai authorities lacking in integrity. There has been a public outcry over the apparent absolution of Vorayuth.

Students and pro-democracy protesters have campaigned for the “Rule of Law ”, against what they blame the current "rule by law", or by a few persons. They say they are fighting for the sovereignty of the people as rulers of the country against authoritarian rule. A series of actions by key institutions have led to the establishment of the current coalition government after elections in March 2019, which has been viewed by pro-democracy activists as authoritarian engineering.

Equality is one of the key values espoused by the young protesters. The existing political system combined with a hierarchical social setting have been blamed for the widening gap between the rich and the poor. Thailand is among the countries with the highest wealth inequality in the world. Traditional values associated with Buddhism justifies the wide gap between the rich and poor by referring to merit-making in the past life, or “Karma”. In this sense, the old values justify the current economic, political and social setting, which is viewed very differently by the young generation who have blamed it as a corrupt and unjust one.

Reacting to student campaign for a change, royalists organised a protest on July 30, claiming that their action was aimed at protecting the monarchy threatened by student protests. Observers said most of participants in the royalist gathering were senior people, contradicting the organisers' claim of vocational students rallying.

Where will this clash of values lead the country?

“I think traditionalists or the conservatives have encroached too much on the space of the liberals,” said Gothom Arya, adviser to Mahidol University's Institute of Human Rights and Peace Studies.

They should step back and open space for everyone, by “rewriting the Constitution”, he suggested.