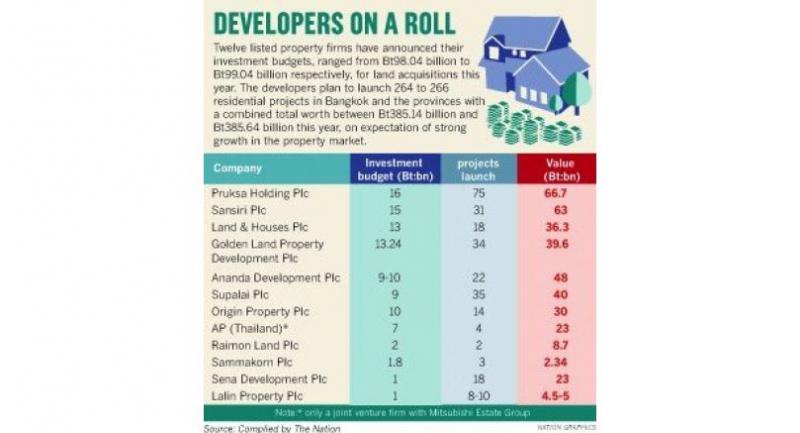 Twelve listed property firms have announced investment budgets worth between Bt98.04 and Bt99.04 billion to acquire land to develop residential projects worth between Bt385.15 billion and Bt385.64 billion in the year 2018, according to a survey by The Nation.

Over half of the investment budget from the firms will come from their initial cash while others will issue debentures worth a combined nearly Bt50 billion, along with seeking project financing from the commerฌcial banks, according to the survey.

For example, Land & Houses Plc plans to issue debentures worth Bt14 billion this year, while Sansiri Plc issued debentures for Bt4 billion early this year, and Pruksa Holding Plc is planning to raise Bt5 billion from issue of debentures this year.

“We are confident the property market will experience strong growth of 510 per cent this year, thanks to the country’s estimated economic growth of 4 to 4.5 per cent in the year, while the country’s exports and tourism have seen strong growth following the global ecoฌnomic recovery,” said Naporn Sunthrnchitcharoen, Land and Houses chairman of the board of directors.

The strong economic indicators explain the company’s strong investment this year to both develop residential projects and invest in new business to boost its recurring income.

Meanwhile, the government has expanded investments worth over Bt2 trillion from 2018 to 2020 to develop infrastructure projects nationwide.

That will boost the demand for residential project growth from this year through the next three years, said Pruksa Real Estate Plc’s chief executive officer premium, Prasert Taedullayasatit.

With the nationwide infrastructure expansion, most listed property firms have continued to develop residential projects around both existing and new mass transit routes.

Following the trend, land prices around existing and new mass transit routes have increased by double digits this year compared with last year.

A January 2 announcement of the Treasury Department of the Finance Ministry noted that land prices nationwide were rising by double digits, especially in the central business districts of Bangkok.

Meanwhile, the purchase last week of 25 rai (4 hectares) of land on Wireless Road, formerly part of the UK embassy grounds, topped out at Bt1.86 million per square wah. Central Group partnered with Hongkong Land to buy the properฌty to develop a mixeduse project. The price had risen by 95.78 per cent from 10 years ago, when Central Group acquired a ninerai (1.44hectare) slice of the UK embassy land. The opening bid in 2007 was Bt950,000 per square wah.