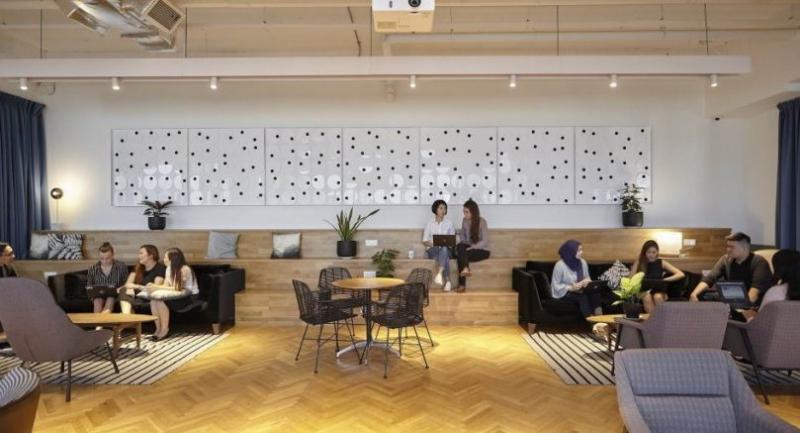 THE NUMBER OF co-working space facilities are expanding in Thailand amid changing business models towards a sharing economy, prompting property developers to develop co-working spaces at their commercial buildings, property experts said.

Property consultancy CBRE said its latest research showed that co-working space seems to be on the tip of everyone’s tongue these days. There was a time when no one knew what the term “serviced office” meant or why someone would want such an option. But today, you can’t open a business publication without seeing an article about co-working. Most people think of co-working spaces as being a thriving hub of young latte-sipping, technology entrepreneurs, coming up with the next big idea that will make them multi-millionaires, the CBRE research said.

The research added that co-working office operators usually offered companies their own private space. It is most common to be offered an office based on the size you will need to fit in a set number of desks. For example, if your company has four employees, your package offer will include a furnished closed office with four desks, 4 chairs and optional telecommunications equipment for four people (Internet service, phone number and a telephone handset). There is usually a common kitchen area and spaces to meet and mingle. Think of it like a five-star hotel, you’re not sharing a room, but you are getting a high level of service and amenities on the premises.

“Competition for space is red hot. As more and more offices pop up, the fight to achieve 100 per cent occupancy is fierce. When shopping for your space, be sure to consider more than just price, as the services and reputation of your provider are just as important. If you do your homework, you’ll avoid the pitfalls of co-working space, such as unreturned deposits, unexpectedly thin walls between units or fees for things like coffee and copying that you didn’t expect. The great news is, changing providers is much easier than with traditional space,” states Nithipat Tongpun, Head of Advisory and Transaction Services – Office, CBRE Thailand.

In Bangkok, four large co-working space operators are opening in multiple locations. JustCo, Spaces, The Great Room and WeWork leased a combined total of 25,000 square metres of space in some of Bangkok’s best office buildings last year and they are still growing, the research said.

Meanwhile, a number of property firms are also interested in developing co-working space at their commercial buildings both office and retail. Central Pattana Plc set up a joint venture with Common Ground Works Sdn Bhd and MSB Asia Ltd of Malaysia to operate a co-working space business in Thailand.

Under the partnership agreement, a joint venture firm will open its first co-working space branch at the beginning of next year and target to invest Bt800 million to open 20 branches within five years. The expansion of co-working spaces in Thailand will help create a new generation of innovative entrepreneurs and nurture a startup community, and build on CPN’s vision of being the “Centre of Life”.

The co-working spaces will meet the needs of modern working life with its “holistic lifestyle integration” concept, and will support Thailand as a hub of SMEs and startups in Southeast Asia as well as supporting sustainable growth for Thailand’s economy, CPN executive vice president of marketing Nattakit Tangpoonsinthana said recently.

Juhn Teo, co-founder and CEO of Common Ground Works, said the company sees great potential for the co-working space business in Thailand, driven by a healthy economy and strong GDP growth. The demand for flexible office space will continue to grow in Thailand, in line with other countries in the region, where they are expected to make up from 2 per cent to 30 per cent of Grade A office space by 2030.

“Also, the Thai culture is very open to lifestyle offerings at the workplace,” he said.

Teo said the key driving factors for the growth of the co-working marketplace in Thailand are the growth of local startups and SMEs, as well as individual firms that are looking for more lifestyle features and benefits for their staff workplace. “The emergence of new digital technology also enables more people to work remotely from outside,” he said.

“For Thailand, we expect the volume of co-working spaces to increase by seven times over the next five years,” said Teo.

Teo added that in the next five years, the company plans to triple the number of branches across Southeast Asia with the aim to have 20 branches in Thailand alone. Ten of these branches will be in prime locations in Bangkok, such as in office buildings connected to CPN’s shopping centres and other Grade A office buildings, while the rest of the branches will be in major cities such as Chiang Mai, Phuket and Pattaya. “The goal is to have our customers use our services in these various locations. Entrepreneurs can use our services in all locations,” Teo said.

Common Ground is the fastest-growing co-working company in Southeast Asia. The company prides itself on not just being a communal working space, but also for building a sustainable and integrated co-working community. It plans to triple the number of branches across the region by the end of 2023, located in the Philippines, Indonesia, Vietnam, Singapore and Thailand.

Meanwhile, Singapore-based JustCo, which owns and manages co-working spaces, plans to spend more than US$100 million (Bt3.2 billion) to add 100 locations in 13 Asian markets – including Thailand – to its network by 2020, founder and chief executive officer Kong Wan Sing said recently.

Aside from Thailand, new co-working space centres will be opened in India, Vietnam, Taiwan, Japan, South Korea, the Philippines, Hong Kong, mainland China, Australia, Singapore, Indonesia and Malaysia. Five of the new centres are planned for Bangkok, with an investment of $3 million to $5 million each. Each centre will provide more than 4,000 square metres. As many as 40 centres will be opened in China, Wan Sing said. The company expects its co-working and office space to reach 250,000 square metres in the 13 countries and territories by 2020, he said.

Currently, the company has eight co-working space centres and five serviced offices in Singapore, as well as two sites in Bangkok, and will open a third site in Bangkok, at Samyan Mitr Town, next year. The company has three locations in Jakarta and two in Shanghai. Combined, they provide co-working and office space of 70,000 square metres, with occupancy rates of more than 70 per cent.

“People’s behaviour changes; they want to share their ideas and create new business models with other people. This will drive co-working space growth both in Thailand and others countries in Asia, Europe, USA, and others,” Sing said.