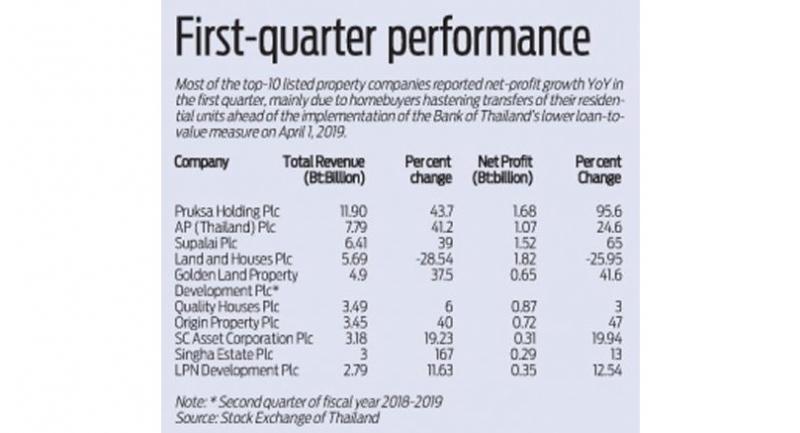 MOST OF the top 10 listed property firms show strong total revenue and net profit growth in the first quarter of this year compared with the same period of last year, largely due to most homebuyers speeding up the transfer of their residential units before measures by the Bank of Thailand to reduce the loan to value ratio come into effect on April 1, 2019.

Pruksa Holding Plc achieved total revenue of Bt11.9 billion and Bt1.68 billion in net profit for the first quarter of this year, up 43.7 per cent and 95.6 per cent from the same period of last year.

Right behind them was AP (Thailand) Plc with total revenue of Bt7.79 billion and Bt1.07 billion in net profit for the quarter, up 41.2 per cent and 24.6 per cent respectively from last year.

Meanwhile, Land and Houses Plc shows total quarterly revenue of Bt5.69 billion and net profit of Bt1.82 billion, a drop of 28.54 per cent and 25.95 per cent respectively from the same period last year. (For other results, see graphic.)

“Our total revenue and net profit dropped in the first quarter of this year when the number of condominium units that were able to be transferred to customers in the first quarter were lower than the same period of last year. Some of our customers were rejected [by banks] to transfer some of our condominium units,” read a management report from Land and Houses Plc to the Stock Exchange of Thailand late on Monday.

SC Asset Corporation Plc’s chief corporate officer Attapol Sariddipuntawat also pointed to strong financial growth for the first quarter, thanks to strong demand in the market. The company is planning to launch new condominium project, Scope Langsuan, worth Bt7.8 billion and located at Langsuan to boost its presales in the second quarter. This is one of 13 new residential projects worth Bt22.7 billion scheduled to launch this year.

Meanwhile, the company has a total backlog worth Bt9.7 billion, up to 65 per cent of which will be booked as revenue over the rest of this year, he said.

Origin Property Plc’s chief executive officer Peerapong Charoon-Eak also said his company showed strong financial result in the first three months, thanks to strong demand in the market. The company is projecting total presales will reach Bt19 billion by the end of this year.