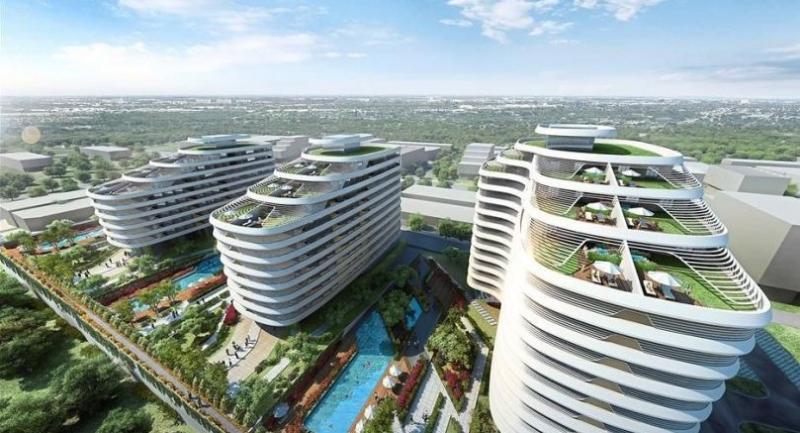 A perspective of Newpark Residences in Kluang, Malaysia: A "smart and green" designed by Singapore-based architecture firm Pomeroy Studio.

“Smart and green” development is the best approach for building in all of the cities within the Asean region, architecture experts say.

“When we say that the way to develop cities is make them ‘smart and green’, we’re talking about developing sustainable cities in the Asean countries and globally during this age of climate change,” said Professor Jason Pomeroy, founder of Pomeroy Studio and Pomeroy Academy. “The focus is on six ideas for designing and developing cities – social, spatial, environment, culture, economics, and technology,” Pomeroy told the InvestAsia 2019 conference in Singapore last week.

Regarding social issue, when building the city has to embrace the great outdoors with landscaping of public areas, Pomeroy explained at the session titled, “Sustainable Cities – Is It Too Late For Asia?”

“When we design a building or a city, we need to involve all the people that are necessary to create a sustainable community,” he said.

Meanwhile, spatial considerations are also necessary because all cities must manage their structures to serve all demands and also be concerned with the quality of life for residents.

In addition, “smart and green” cities have to be concerned about the environment.

“When we design cities, they have to have a plan for a carbon-negative future by using alternative energy to reduce CO2. This will improve the cities as they become ‘sustainable’ cities,” he said.

Blending in with the city

All cities also have their unique culture, and the design of individual buildings and the overall city has to be concerned with that culture. When Pomeroy designed a residence in Myanmar, for example, he had to learn about the country’s culture, and come up with a design that combined the ideas of the architect with the country’s culture. This approach will combine together the global and the local, he said.

“In my view, when designing a smart and sustainable city, you have to be concerned with the community and culture, together with technology and innovation. A city’s design to ensure the wellbeing of all people requires the collaboration of all together. This is the way to have sustainable cities for the long term,” he said.

Alina Yeo, director of architecture firm WOHA, spoke to the event on the topic, “Garden City Mega City: Strategies for 21st Century Sustainable Cities”. Architectural design has to be concerned about the environment, she said.

“When we design a building, we are concerned about the green area. This is the way WOHA Group design our buildings in Singapore and the other countries in Asia,” she said.

Building a green space into any design will improve the quality of life for those who live there, while also creating the environmentally best landscapes surrounding the building, she said.

The new facility will help Asean countries to identify and design projects that are tied to measurable “green” and climaterelated goals. In addition to direct financing through the provision of loans, funding will also be made available to reduce the risks associated with investing in green infrastructure, including guarantees, in order to promote priฌvate sector cofinancing.

The facility’s development is not expected to affect ADB’s financial position, but rather to help the bank achieve its $6 billion climate financing target by 2020. As of 2017, ADB’s aggregate climate financing had reached $5.2 billion.

Under Strategy 2030, the bank has committed to $80 billion in cumulative climate financing between 2019 and 2030, with 75 per cent of its committed operations addressing climate change mitigation and adaptation by 2030.

The $1billion facility will increase resources available to Asean governments. After being established as a joint initiative by the ADB and Asean governments in 2011, the AIF committed $520 million for energy, transport, water and urban infrastructure projects to addressed risks posed by climate change to economic activity, infrastructure and populations in the region.

One example of ADB’s role in developing climate resiliency within Asean was its $600 million (including $100 million from the AIF) 2017 commitment to Indonesia to improve food security and reduce poverty in rural areas by modernising agricultural irrigation systems. Enhancing resiliency in Indonesia’s agricultural sector was seen as a way to reduce the economy’s overall susceptibility to adverse climate shocks.

The ADB is also financing the development of the $100-million Hanoi-Ho Chi Minh City power grid development project in Vietnam, which aims to improve electricity supply and reliability by reducing green-house gas emissions and power losses caused by overloading. With a growฌing urban population, meeting the increase in national electricity demand in a sustainable manner is expected to help build the economy’s development potential and overall resiliency.

The AIF facility is also an illustration of the MDB response to shareholder demands to address climate change and environmental effects in their lending activity, which is expected to contribute to ongoing strong shareholder support for MDBs since they align MDB operations with their mandates.