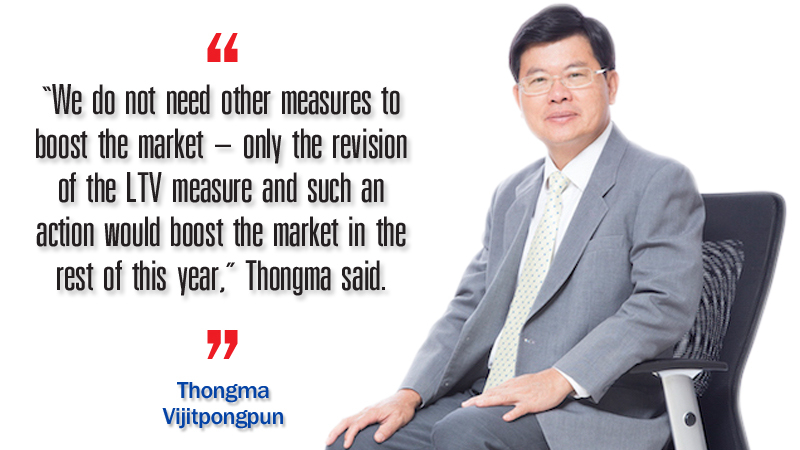 Property firms are pressing the new government to ease up on the loan-to-value (LTV) tightening measure in the wake of a 31 per cent drop in the property market in the second quarter of this year from the year-earlier period.

“We need the new government to consider revising the LTV measure, especially for first-home buyers that have to pay a down payment of 10 per cent, which is a high cost for low-income earners. This segment accounts for up to 20 per cent of the total property market value,” LPN Development Plc’s president and chief executive officer, Opas Sripayak, said in an interview with The Nation recently.

Opas said that for buyers wanting a home priced at Bt1 million, they have to pay a down payment of Bt100,000. This represents a big burden on people who earn under Bt20,000 per month. This requirement has a direct impact on this segment of the market which, with the share of about 20 per cent of the property market, is valued at about Bt600 billion a year.

Pruksa Holding Plc’s chief executive officer, Thongma Vijitpongpun, is another property executive wanting the new government to request that the Bank of Thailand revise the LTV measure for the first-home market. Thongma noted that this segment of the market dropped by more than 20 per cent in the second quarter of this year; the tightened LTV measure took effect on April 1.

All property firms have revised their business plans, which now factor in a reduction in the number of launches for residential projects in the second quarter of this year and for the rest of this year.

The tightening measure has cut into the financial results of developers for the second half of the year.

The forecasts reflect the fact that many would-be buyers could not secure mortgages for their intended property purchases.

Research shows that presales in the first half of this year for listed property firms will be Bt88.9 billion, a drop of 21 per cent from the same period of last year. Presales of condominiums are expected to drop 32 per cent and those for single detached houses and townhouses by 13 per cent. The figure of Bt88.9 billion is only 40 per cent of the total presales target of listed property firms for this year.

Property Perfect Plc’s chief executive officer, Chainid Adhyanasakul, believes that the property market in the second quarter will fall by more than 20 per cent from the same period of last year. The tough times have forced most property firms to revise the launch schedule of their residential projects in the second quarter and for the rest of this year.

Supalai Plc’s managing director, Tritecha Tangmatitham, said that up to 10 per cent of its customers dropped out after the LTV measure became effective. As a result, the company had to revise its business model to focus on real demand for homes priced between Bt3 million and Bt10 million. Such buyers still have purchasing power.”