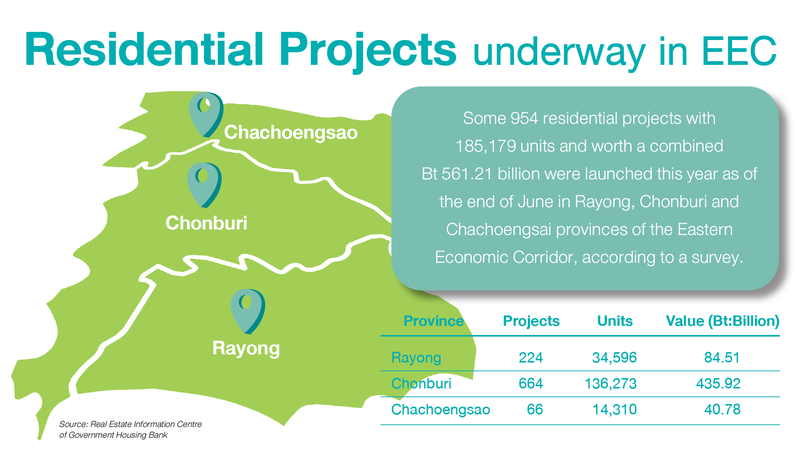 Property firms have built Bt561.2 billion worth of residences in the area of the fast-developing Eastern Economic Corridor (EEC) spanning Rayong, Chonburi and Chachoengsao, where half a million more people are expected to settle this year through 2023.

A survey by the Government Housing Bank’s Real Estate Information Centre found that, as of June 30,954 residential projects were for sale in the three provinces, representing 185,179 units and a combined worth of Bt561.21 billion.

Chonburi had the most – 664 projects with 136,273 units worth Bt435.92 billion, following by Rayong and Chachoengsao respectively (see graphic).

Several property firms have unveiled more residential project in the EEC area in the third quarter of this year.

SC Asset Corp has single-detached homes at Pave Ban Pho-Chachoengsao worth Bt750 million, where the starting price is Bt4 million. Supalai has plans for residential projects worth up to Bt3 billion.

“We expanded our investment in the EEC when we saw the strong demand coming from new businesses registering to move to the area,” Pruksa chief executive Piya Prayong said.

The Commerce Ministry reports that 61,284 firms are listed to operate in the EEC with combined registered capital of Bt1.7 trillion, a dramatic jump from the 6,800 listed in 2017.

More than 10,800 of those firms – claiming registered capital of Bt72.6 billion – are engaged in real estate, nearly half of them joint ventures with partners in Mainland China, Japan, Taiwan and Hong Kong.

The government anticipates creating 500,000 jobs in the EEC, mainly in “S-curve industries” like industrial robotics, aviation, logistics, biofuel and bio-chemicals, and digital and medical technology.

Based on aggressive investment since 2017, infrastructure including a high-speed railway and an aviation hub will be built this year and next, further boosting demand for homes.

Real Estate Information Centre acting director-general Wichai Viratakaphan said 57,314 units together worth Bt102.6 billion were transferred to purchasers throughout 2018, an increase of more than 20 per cent from 2017.

“We saw strong demand for homes in the EEC in 2017 and 2018, but growth was slight in the first half of this year after the Bank of Thailand introduced the loan-to-value policy, which directly affected demand in the property market across the country,” Wichai said.

Demand for homes is still rising in the EEC, however, and faster than last year, with prices still not exceeding Bt5 million per unit, he said.

Land prices are also on the rise there. The Finance Ministry’s Treasury Department revises prices nationwide every four years and will announce new baht-appreciated prices in 2020 that is expected to increase the average by 10-20 per cent over the amounts of four years ago.

“Land prices in the EEC have increased by as much as 100 per cent due to demand from both industry and property developers,” a department source said.

“Industrial and corporate expansion also requires homes for the workers,” a property expert said on condition of anonymity. “The challenge for property firms is how much to expand their investments now that major infrastructure is coming, including the high-speed railway linking Don Mueang, Suvarnabhumi and U-tapao airports, Map Ta Phut Phase 3 and the aviation hub. All of these will boost investment for related industry and the necessary supply chain.”