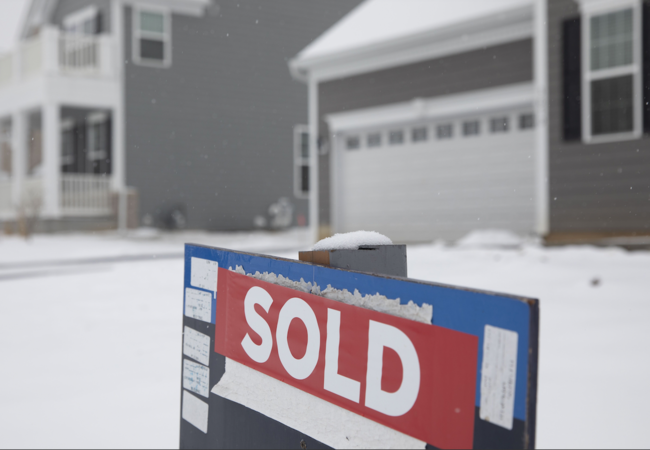 A sold sign is displayed outside a new home at the Toll Brothers Inc. Bowes Creek Country Club community in Elgin, Ill, on Jan. 23, 2020. MUST CREDIT: Bloomberg photo by Daniel Acker.

U.S. new-home construction remained robust in January and applications to build jumped to the highest level since 2007 as low mortgage rates and a solid labor market continued to fuel housing demand.

Residential starts slipped 3.6% to a 1.57 million annualized rate, still the second-fastest pace of the expansion, after an upwardly revised 1.63 million pace in the prior month, according to government figures released Wednesday. January starts exceeded the median estimate in a Bloomberg survey of economists. Permits, a proxy for future construction, advanced 9.2% to a 1.55 million rate, the highest since March 2007.

While the pace of construction eased in January, the figures suggest the housing market remains a bright spot for the U.S. economy amid sluggish business investment. When paired with continued strength in housing permits, current and planned construction should help mitigate a lean supply of housing.

Mild weather likely played a role in both the December and January readings as warmer temperatures supported construction in months that typically slow homebuilding in areas like the Northeast.

Starts of multifamily homes, a category that tends to be volatile and includes apartment buildings and condominiums, edged up 0.7% to the highest level since 1986. Permits surged 14.6% to a 564,000 pace.

Private data released Tuesday showed sentiment among homebuilders eased slightly in February, but held near a two- decade high, as gauges of sales and prospective buyer traffic cooled. Recent figures from the University of Michigan showed home-buying attitudes in February advanced to the highest level since 2017.

By region, new-home construction fell in the South and Midwest. Starts increased in the Northeast to the highest since June 2015 and climbed in the West the best level since the end of 2006.

The report, produced jointly by the U.S. Census Bureau and the Department of Housing and Urban Development, has a wide margin of error, with a 90% chance that the headline figure was between a 16.9% drop and a 9.7% increase.