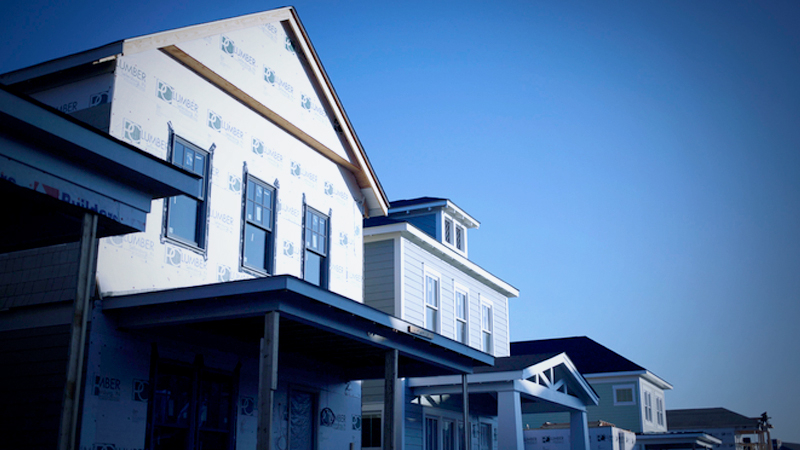 Homes under construction in Louisville, Ky., on Jan. 5, 2019. MUST CREDIT: Bloomberg photo by Luke Sharrett.

New-home sales in the U.S. jumped at the start of the year, reaching the strongest pace since mid-2007 on the heels of cheaper borrowing costs, favorable weather and a resilient labor market.

Single-family home sales rose 7.9% to a 764,000 annualized pace in January, exceeding the median estimate in a Bloomberg survey, while the December figure was revised higher, government data showed Wednesday. The median sales price jumped 14% from a year earlier to a record $348,200 as more expensive properties made up a larger share of purchases.

Mortgage rates near three-year lows, elevated consumer confidence and steady employment are energizing the real estate market. Stronger demand against a backdrop of lean inventories will probably power residential construction for a third straight quarter and contribute to economic growth as business investment remains tepid and concerns mount about the economic repercussions of the coronavirus.

The number of new homes sold for which construction hadn't yet started increased to the best level since June, while the number sold and currently being built was the highest since 2007. Those figures indicate a robust pipeline for homebuilders.

Consumer confidence data from the Conference Board on Tuesday showed a jump in the share of respondents who said they intended to buy a new home within the next six months.

Purchases of new homes, which account for about 10% of the market, increased in three of four U.S. regions, led by the Midwest and West.

The supply of homes at the current sales rate declined to 5.1 months, the lowest since November 2017, from 5.5 months in the prior month.

The government's data on new-home sales are volatile on a month-to-month basis. Changes in the seasonally adjusted data have a wide margin of error. There's a 90% chance that the percentage change in January was between a 9.9% decline and a 25.7% increase, according to the U.S. Census Bureau.