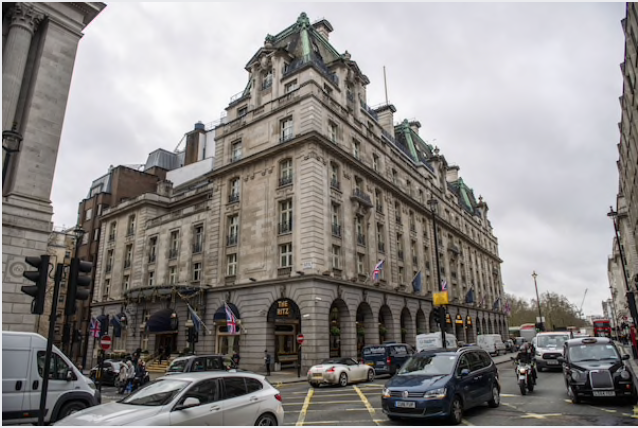 The Ritz Hotel on Piccadily in London on March 11, 2020. MUST CREDIT: Bloomberg photo by Chris J. Ratcliffe.

Saudi Arabia investment fund Sidra Capital offered 1.3 billion pounds ($1.6 billion) for the luxurious Ritz Hotel in London before it was eventually sold for nearly half of that sum to a private Qatari investor.

The bid was revealed Wednesday during a court dispute between two sides of one of the U.K.'s wealthiest families, the Barclays. The hotel, which opened in London's Mayfair in 1906, was sold for less than 800 million pounds in March.

Billionaire identical twins Frederick and David Barclay bought the hotel for 75 million pounds in 1995. The once-inseparable pair, who also own the Telegraph newspaper, have since handed control of their businesses to their children, who are now locked in a bitter family feud being publicly fought in the courts.

Frederick Barclay and his daughter Amanda are suing four of their relatives after Frederick discovered that his nephew Alistair had recorded his conversations with Amanda in the conservatory of the hotel. The two had been talking about "potential acquisitions and disposals of business assets" as well as the structure and financing of the group.

The recordings took place while both sides of the family conducted separate negotiations over the sale of the Ritz, one of the Barclay's most valuable business.

Alistair, Aidan, Howard and Andrew Barclay, all from David's side of the family, learned about Frederick's conversations with Sidra, Frederick and Amanda's lawyer, Hefin Rees, said in written submissions. The Saudi fund had made an initial offer of some 1.3 billion pounds for the property, he said.

Despite this, David's side of the family, sold the hotel to another buyer from Qatar "at a price that appears to be for half the market price," Rees said.

"One is left to speculate why," Rees told the court.

A spokesperson for Ellerman Holdings Ltd., the holding company for the Barclay's U.K. assets led by Aidan and Howard Barclay, declined to comment. A spokesman for Frederick and Amanda Barclay declined to comment during the hearing. Sidra didn't immediately respond to a request to comment.

Filings show the new owner of the Ritz is Abdulhadi Mana Al-Hajri, a 40-year-old businessman and the brother-in-law of Qatar's ruler. In addition to the Ritz, his real estate holdings include Turkey's most expensive home and a $50 million Miami mansion, according to local media.

Frederick Barclay said previously in March that he had received competing offers in excess of 1 billion pounds and had threatened legal action if the hotel sold for less.

"He is a man who is now left to contemplate his nephews' betrayal and a father who has witnessed the prejudicial treatment of his daughter by her cousins," Rees told the court.