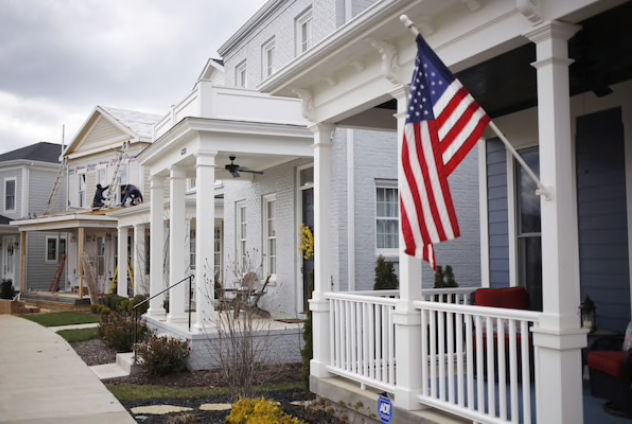 Contractors work on a home under construction in the Norton Commons subdivision of Louisville, Ky., on March 7, 2018. MUST CREDIT: Bloomberg photo by Luke Sharrett.

Mortgage rates are at record lows, but borrowers hoping to take advantage are running into the toughest loan-approval standards in years.

Over the past month, lenders have put in place higher credit-score and down payment requirements, and in some cases stopped issuing certain types of loans altogether, in effect shutting down a large swath of the mortgage market.

The triggers, industry executives say, include lenders becoming risk-averse during the coronavirus crisis, knock-on effects of Congress allowing millions of borrowers to delay their monthly payments, and policies implemented amid the pandemic by mortgage giants Fannie Mae and Freddie Mac. The impact has been dramatic, with one model showing mortgage credit availability has plunged by more than 25% since the U.S. outbreak of the virus.

The tightened lending could add another headwind for the nation's besieged economy by dampening home sales just as some states lift stay-at-home orders and the spring months herald the traditional buying season. Already, mortgage refinances are coming in at a much slower pace than analysts would expect, considering the rock-bottom borrowing rates.

In March, riskier borrowers "could get a mortgage but just pay a higher price than other people," said Michael Neal, a senior research associate at the Urban Institute Housing Finance Policy Center. "Now, some people are just not going to get mortgages."

JPMorgan Chase tightened its standards last month, requiring borrowers to have minimum credit scores of 700 and to make down payments of 20% of the home price on most mortgages, including refinances if the bank didn't already manage the loan.

Wells Fargo increased its minimum credit score to 680 for government loans that it buys from smaller lenders before aggregating them into mortgage bonds.

The banks' revised standards are far above the typical minimum score of 580 and down payment of 3.5% that borrowers need to qualify for home-buying programs supported by the federal government.

Wells Fargo is no longer letting borrowers refinance their mortgages while cashing out home equity, and both Wells and JPMorgan have suspended new home-equity lines of credit. Truist Financial Corp. has suspended some cash-out refinances for jumbo loans with high balances because of economic conditions, a spokesman said.

There are signs that banks are even trying to limit regular refinances. Wells Fargo on Thursday quoted a refinance rate of 4% for a 30-year fixed-rate mortgage, more than half a percentage point higher than it quoted for the same loan if used to buy a home.

A Wells Fargo spokesman said the company believes its rates are within the range of what they see from other lenders. He said the company suspended home-equity lines of credit in light of uncertainty surrounding the economic recovery.

A JPMorgan spokeswoman said the bank's changes are temporary and due to the unclear economic outlook.

Refinances surged in early March as homeowners utilized low rates to reduce their monthly payments. But refinance rate locks, a forward-looking measure of refinance activity, had plunged 80% from their peak by mid-April, according to Black Knight Inc., a mortgage information service. The company said that even the steep increase in unemployment in March and April couldn't explain why refinance activity fell so dramatically.

Industry executives say the tighter underwriting is partly in response to policies put in place by Fannie and Freddie that make it expensive or risky to make certain kinds of mortgages. For instance, Fannie and Freddie said last month they would buy mortgages where the borrower had already entered forbearance. But the mortgage-finance companies excluded cash-out refinances. Mortgage Bankers Association Chief Economist Michael Fratantoni said that prompted many lenders to limit issuance of those products.

Fannie, Freddie and government agencies such as the Federal Housing Administration set standards for the mortgages they're willing to back. For example, the FHA will insure loans where the borrower has a credit score of as low as 580 with a 3.5% down payment.

However, mortgage lenders sometimes set their own, stricter standards, even if they intend to sell the loans to Fannie or Freddie or have them insured by the FHA. Fannie and Freddie, which have been under the U.S. government's control since the 2008 financial crisis, buy mortgages from lenders and package them into trillions of dollars of bonds with guarantees that protect investors against the risk of borrowers defaulting.

Mortgage credit availability has fallen 26% since the end of February, the Mortgage Bankers Association said in a Thursday statement, citing an index of lending standards. Most of the pain has been for loans not supported by the government. Still, mortgages backstopped by Fannie, Freddie and federal agencies in April did have the toughest credit terms that such loans have had in more than five years.

Many lenders appear to have put restrictions in place in response to the $2.2 trillion stimulus bill that lawmakers passed in March. Under the new law, lenders must let borrowers with government-guaranteed mortgages delay as much as a year's worth of payments if they were impacted by coronavirus.

Even though they eventually get reimbursed, mortgage servicers are required to advance the missed payments to bond investors. That makes lenders less eager to offer loans to borrowers who they think will need forbearance, such as consumers with low credit scores and those who can only afford minimal down payments.

The MBA's Fratantoni said the credit crunch has been exacerbated by the reticence of federal regulators to establish a liquidity facility that would help servicers advance payments to bondholders. While Fratantoni said large servicers may not go under, they're still protecting themselves by tightening mortgage requirements.

"I can't imagine any lender wanting to be aggressive at all in this environment," said Moody's Analytics chief economist Mark Zandi. "It's how far deep into the bunker are you."