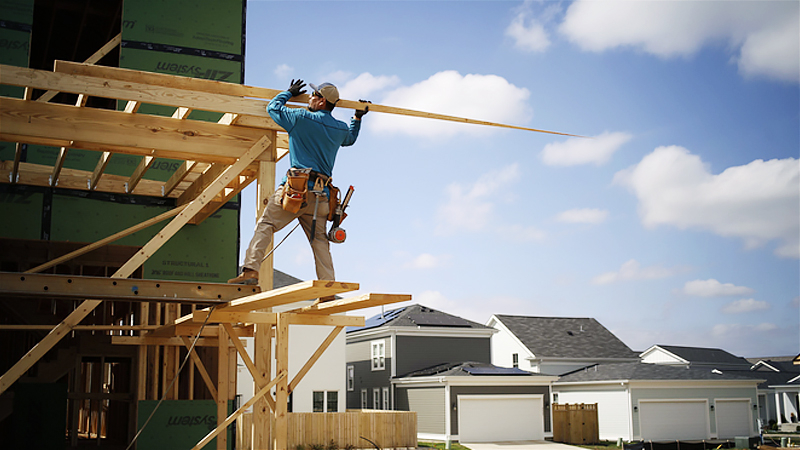 A contractor stands on lumber scaffolding while working on a home under construction in the Norton Commons subdivision in Louisville, Ky.., on March 23, 2020. MUST CREDIT: Bloomberg photo by Luke Sharrett.

New-home sales in the U.S. unexpectedly increased in April after swooning a month earlier, suggesting the housing market is starting to stabilize.

Purchases of single-family houses climbed 0.6% from March to a 623,000 annualized pace, government data showed Tuesday. The median forecast in a Bloomberg survey of economists called for a drop to a 480,000 rate of sales. The median sale price fell 8.6% from a year earlier to $309,900.

Even with the gain, sales are unlikely to rebound to pre-coronavirus levels, said Alex Barron, an analyst with the Housing Research Center in El Paso, Texas.

Mortgage rates near all-time lows may be starting to put a floor under the housing market, helping explain a recent increase in builder sentiment. At the same time, soaring unemployment and tighter credit standards may limit the strength of the recovery in housing.

Three of four U.S. regions showed stronger home sales in April than a month earlier, reflecting 2.4% gains in the South and Midwest, the Commerce Department's report showed. Purchases climbed 8.7% in the Northeast and dropped 6.3% in the West.