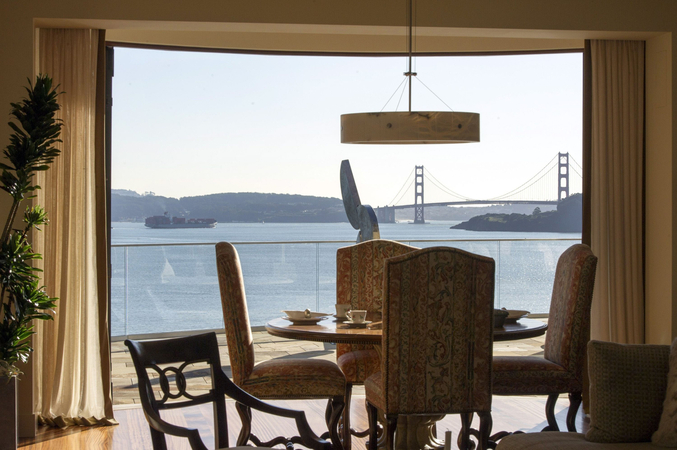 The Golden Gate Bridge is seen from the dining room of a 15,000 square-foot custom built home on Belvedere Island in Marin County, Calif., on Dec. 19, 2012. MUST CREDIT: Bloomberg photo by David Paul Morris.

Katrina Kehl warned her clients not to expect many offers on their $1.7 million home in Marin County, just north of San Francisco. They were, after all, in the middle of a pandemic and economic collapse.

They ended up with 13 bids.

Across the San Francisco Bay area -- home to some of America's earliest and strictest shelter-in-place rules -- demand for real estate is soaring in outer suburbs and wealthy havens known for their gorgeous landscapes. From affluent Marin County to Napa wine country and south to Monterey's Carmel Valley, brokers say the coronavirus outbreak is leading to a surge of interest from homebuyers looking to spread out.

"I've never seen the demand higher for Marin County real estate than when covid-19 hit," said Josh Burns, an agent with Sotheby's International who has been in the business for about 20 years.

Like New York, where Manhattanites fleeing the city have fueled newfound interest in tony suburbs, San Francisco is flush with people with the means to upgrade to more spacious areas. The tech companies that drive the region's economy are also signaling a long-term acceptance of remote work, raising the prospect that there's little need to live close to offices.

But the rush to move also shows the growing divides in a region where real estate is already out of reach for many residents, with the median house price in the Bay Area approaching $1 million. Relocating isn't an option for lower-income people who have been among the hardest-hit by the coronavirus. In San Francisco, expensive neighborhoods have emptied as residents escape during virus shutdowns, while the Tenderloin, an area known for its large homeless population, has hundreds of tents.

"This is an example of another way the most advantaged, the most affluent have isolated themselves from this latest crisis," said Patrick Sharkey, a sociology professor at Princeton University who focuses on urban inequality. "It's a very small segment of the population that has another home that they can go take off to."

After real estate deals initially fell off with shelter-in-place orders, last month saw a resurgence in interest. The suburban and rural areas around the Bay Area had the biggest rebound, while contracts in San Francisco and Oakland's Alameda County were well below where they were in 2019, according to data collected by Patrick Carlisle, Compass's chief market analyst for the Bay Area.

In the wine growing regions of Sonoma and Napa Valley, it's been "an incredibly brisk season," said Ginger Martin, a real estate agent with Sotheby's who concentrates on the high end of the market.

"There's a mad rush to get out of the city," Martin said. "What I'm really doing well with right now is anything that's turnkey."

One of the Napa properties she listed -- a $10.85 million, four-acre estate built this year with one acre of planted sauvignon blanc next to the backyard swimming pool and spa -- was snapped up within hours of the buyer's tour of the home.

But there's also demand among more typical homebuyers. Justin Housman and his wife had been looking to leave San Francisco for Marin County before the virus hit. As they were sheltering in place with their one-year-old, finding a more spacious home took on more urgency. They found the market very different from when they first started their search.

Homes "would have like 12, 13 offers -- it's incredibly competitive," Housman said of his hunt in the Marin County town of Fairfax. "Our realtors are just like, 'we've never seen this.'"

They ended up turning to the rental market instead, eventually landing a property that had 15 applicants, Housman said.

What's unclear is if this type of demand is a short-term trend to escape the virus, or a signal of a more pronounced shift from dense cities to the suburbs. In Marin, houses like the one Kehl is selling in Mill Valley are typically primary residences, she said. It varies more at the higher end, where purchasers tend to be second-home buyers.

Ed Glaeser, an urban economist with Harvard University, said he expects cities to be resilient so long as the virus proves to be a short-term aberration. "If this becomes a regular thing, then by all means, having a large suburban home is going to become very attractive relative to having urban space," he said.

Cities are also now affected by protests roiling the country in response to the death of George Floyd at the hands of police officers. The unrest may further delay a recovery in the appeal of urban areas, said Deniz Kahramaner, the founder of data-focused real estate brokerage Atlasa.

In the Bay Area, demand may be more about changing work habits. Tech employees who have spent months working from home may continue to do so for the foreseeable future. San Francisco-based Twitter Inc. has said employees can work away from the office forever, while Facebook Inc. expects as much as 50% of its workforce may be remote in 10 years.

Silicon Valley agent Elaine White said homebuyers are expanding beyond the areas close to tech campuses that made the location so convenient in pre-virus times. She has one client looking in the Carmel Valley and Napa and Sonoma areas, and another searching for a second home near Lake Tahoe. On a sales meeting with about 75 Coldwell Banker coworkers, White said brokers were hearing from people that they wanted larger houses with bigger lots.

"Buyers are all putting a larger emphasis on features like distinct home offices, special outdoor spaces, access to open space and if it's within their budget, things like swimming pools," said Marin County's Burns. "Having a far commute to San Francisco is less of an issue right now than I've ever seen it before."