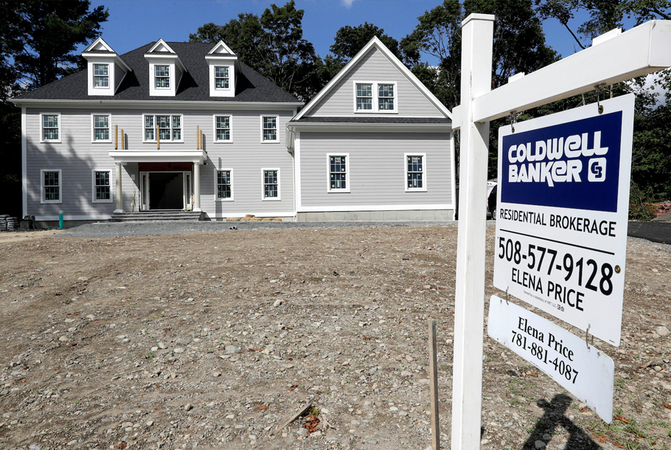 The average for a 30-year fixed rate mortgage reached 2.88 percent, down from 2,90 percent, according to Freddie Mac.(Steven Senne/ AP)

The average for a 30-year fixed-rate mortgage reached 2.88%, down from 2.90%, with an average 0.8 point, according to a Freddie Mac report released Thursday. (A point is a fee buyers pay, in addition to the interest rate, that equals 1% of the loan.) The average rate is substantially down from what it was a year ago - 3.65%.

"Mortgage rates are in a holding pattern because we have lots of big things looming and investors are waiting to see what happens," said Danielle Hale, chief economist with Realtor.com. "Obviously, they're waiting on the election results, but also on the next stimulus plan, which seems to start and stall. I expect mortgage rates to stay stable and not go up or down much until we get some of this big news."

The yield on 10-year Treasury notes, Federal Reserve policies, the stock market and other economic indicators as well as the volume of mortgage applications also all play a role in determining rates individual borrowers are offered from week to week.

Pending home sales, which are homes that are under contract but have not yet gone to closing, rose by 24.2% in August compared to August 2019, according to the National Association of Realtors. They were also up 8.8% compared to July. The buyers of these homes are in the process of finalizing their mortgage loans, which contributes to high loan demand.

At the same time, mortgage applications for the week dropped - not so much from declining demand but from lenders trying to deal with an overwhelming interest from borrowers by curtailing the number of applications they will accept.

Because the Federal Reserve intends for at least the next two years to continue buying bundles of mortgages sold to investors called mortgage-backed securities, or MBSs, analysts say they expect home loan rates to remain at near historically low levels for the long term. Still, many lenders advise potential borrowers not to wait.

"The advice offered by most lenders: Act now and take advantage of the historically low rates to finance the purchase of a home or refinance a current mortgage," Buege said. "Most agree rates will not drop much further, but have a slight chance of increasing. If you have a reason to act, do it now."

Another possible reason not to wait, according to experts: Rising home prices might offset the savings generated by low mortgage rates.

In a statement, Sam Khater, Freddie Mac's chief economist, added: "We're seeing potential home buyers who now have more purchasing power and many current homeowners who have the option to refinance their loan for a better rate. However, several factors could disrupt this activity, including high home prices, low inventory and lender capacity."

"There are indications that refinance rates are not decreasing to the same extent as rates for home purchase loans, and that could explain last week's decline in refinances," Joel Kan, MBA's associate vice president of economic and industry forecasting, said in a statement. "Many lenders are still operating at full capacity and working through operational challenges, ultimately limiting the number of applications they are able to accept."