Tim Mastic in front of his tiny house in the Escape Tampa Bay Village community in Florida. MUST CREDIT: David Peterson.

Even before the pandemic hit, Tim Mastic had been thinking of buying an Airstream travel trailer, distinguished for its rounded, polished aluminum body.

He would sell his three-bedroom, two-bath house with a two-car garage in Tampa, and work and see the United States at the same time. 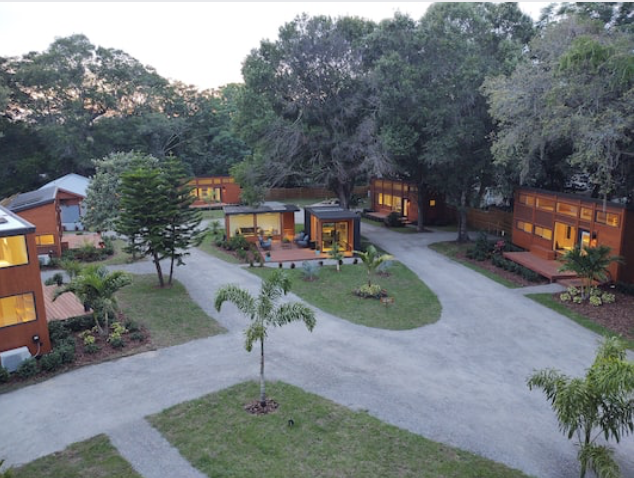 "I was spending all my money on the house and on the property," says Mastic, 31, a project manager for an international software company based in New Jersey. "I wanted to live and travel. I wanted to spend money on people and places and experiences rather than on maintaining a home," he says. "I wanted to collect experiences, not things." 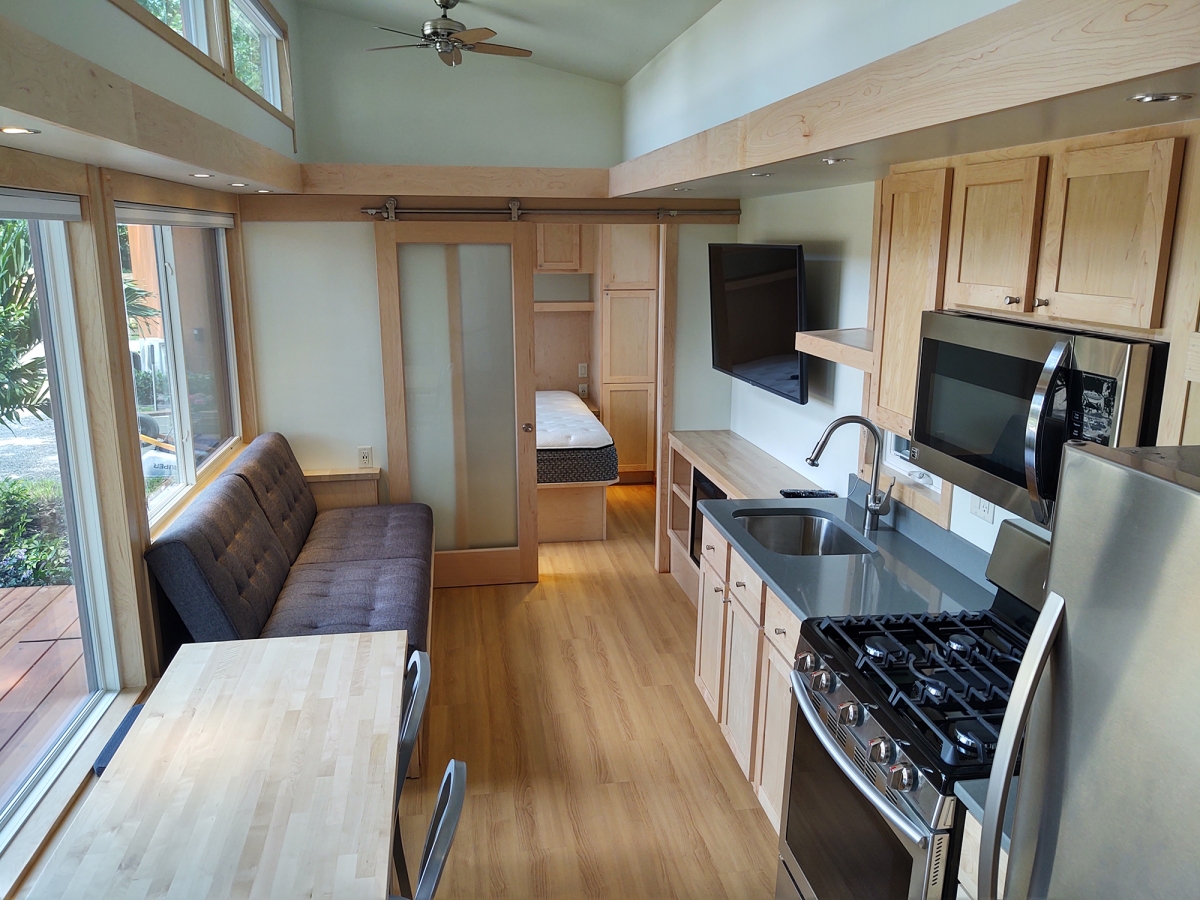 But in the spring he revised his plan. Campgrounds were closing down as were national parks. "When covid hit and everything was shutting down, I didn't want to get stuck in that situation, "he says. "I literally would have been with nowhere to go."

Mastic didn't give up on his idea completely. After reading a newspaper article about a tiny house village in Thonotosassa, Fla., about six miles from the University of South Florida in Tampa, he decided to take a look. These tiny houses range from 300 to 650 square feet and are situated on a one-acre piece of land in a gated community, Escape Tampa Bay Village.

Indeed, the tiny houses designed in a Frank Lloyd Wright style have become increasingly popular. Since the coronavirus shutdowns in March, "our business has gone from growing rapidly to growing exponentially," says Dan George Dobrowolski, founder of the Tampa Bay Village and CEO of Tiny House Escape Villages, in Rice Lake, Wis. In the past six months, sales of the tiny houses jumped 120 percent, he says. "There's been a dramatic change because of the virus."

Tiny houses afford privacy. "You have your own space, and you're safe," Dobrowolski says. For example, there are 10 tiny houses on the acre site in Tampa Bay. They are mostly 400 to 450 square feet, with the smallest at 300 square feet. The largest is 650 square feet with two bedrooms. The village is designed as an actual neighborhood.

Of the pandemic, Dobrowolski says, "People are trying to get out" of urban areas. "They want to be peripheral to cities, near the city." Of the tiny house, they tell him, "we need it right now." Those who buy come from all parts of the economic spectrum. They want to leave places like Chicago and Portland, Ore., as well as Silicon Valley and Manhattan, he says.

For example, executives have bought tiny houses from Escape to leave Silicon Valley for the Santa Cruz Mountains or San Francisco for Sonoma County.

Often, tiny houses are home to one or two people, though the larger homes can accommodate more. For some, rather than living in a condominium, co-op or apartment where they might have to rely on elevators, living in a tiny house village sets houses apart with adequate space for social distancing.

A tiny house village eliminates the need to find a place where the structures are allowed under zoning regulations and laws on the state and local level. The location has to be zoned for tiny houses, and zoning regulations that allow them have been passed in some places. Among tiny house-friendly states are California, Florida, North Carolina, Oregon and Texas.

If you live in a tiny house village, the landowner has typically already researched those regulations and laws before developing the land. In this case, Tiny House Escape Villages owns the land, and home purchasers pay a monthly rent for the site their house occupies within the village.

Mastic, who moved to the village in June, says his costs are approximately $1,000 a month, including a monthly fee to rent the lot and an RV loan for the tiny house that cost $96,000. The lot fee covers water and sewer. The tiny house, called a One XL Tall, is 30 feet long and 8½ feet wide, with a second-story loft for sleeping that can accommodate a queen-size bed.

At roughly 344 square feet, it has a living area on the main level, a kitchen equipped with full-size appliances, a microwave and a stackable washer and dryer. The house also includes a 50-inch TV and an electric fireplace. "I can have the microwave, ceiling fan, AC, coffee maker and toaster oven running all at the same time," Mastic says, noting that there is enough power to run everything simultaneously. In addition, he keeps two bicycles in the tiny house.

Dobrowolski bought the land about two years ago, and came up with a master plan for Tampa Bay Village - 10 tiny houses and a couple of additional structures, such as a community space, that residents of the one-acre village can use. "We designed it specifically only for 10 units," he says.

Owners can reserve the community space if they prefer to work or entertain in them. "There's a whiteboard where you put a note that says when you want to use the space," Mastic says.

Working with Kelly Davis, principal emeritus of SALA Architects, the company builds the tiny houses in an RV Industry Association-inspected plant. In addition to a focus on design, the tiny houses are insulated with closed cell foam to resist heat flow, and have large windows for maximum light and views.

For Judie Clark, who worked as a tour director on a 35-foot tour bus for 20 years, traveling mostly in the United States, moving to a tiny house made sense - and made space. "This is an improvement," she says, half-joking, about the tiny house she moved into in July.

Clark, 82, had been living in a 1,700-square-foot house in Tampa, when she became interested in tiny houses.

Three years ago, she "hung up her traveling shoes," and was working part-time at a sporting goods store. A "tumble" in March that required a hip replacement left her in a rehabilitation center for a couple of months.

When she was back in action, Clark, who is divorced and has been on her own for many years, began to think seriously about her next move. "I began to rethink what I needed to do with my life," she says. "The timing was right. I was looking for a change. Everything kind of came together at the right time."

One of her sons found the tiny house village online, and Clark went to see it two or three times in May before deciding it was right for her. "I went from 1,700 square feet to 400 square feet," she says.

Once she had decided to make her move, within two to three days she had sold her house, and moved into her tiny house. Hers is 12 feet wide and 30 feet long on one level. Her mortgage was paid off so she chose to pay cash for her new home, just under $100,000. She pays the monthly lot rental fee that includes water, and her electricity costs much less than in her previous house. The Internet and cable were already set up, and cost less as well. "I think it's going to be considerably cheaper to live here," she says.

Clark likes the minimal maintenance on her new space. Since finishing out-patient physical therapy and being able to drive her car, she is enjoying her new lifestyle. "It's pretty liberating actually," she says. One convenience she cited is being able to vacuum the house without having to unplug the appliance and plug it in somewhere else.

Clark said she looked at other properties and wanted to avoid gated communities, though she likes this one. Entry to the village is through a gate using a card-key system.

"You get a real feeling of being in the country," she says. "I love it. It's quiet. If you want go-go all the time it'll be a little quiet. For me, it's perfect."