Thailand expects its ongoing investment in major infrastructure to be the basis of growth in the next five years, Mr. Kobsak Pootrakool, Deputy Secretary General to the Prime Minister and Secretary to the Thailand’s Council of Economic Ministers, said at a recent meeting with the international press to discuss “Thailand’s Investment Ecosystem Update.”

Speaking at a briefing held at the Foreign Correspondents Club of Thailand in Bangkok, Kobsak estimated that the current cyclical downturn of the global economy and the pressure from the geopolitical and trade tensions, will continue to affect Thailand’s economic growth for another two to three years.

However, Kobsak reaffirmed his positive outlook that progress has been made and foundation has been laid to strengthen the Thai economy in order to minimize current fluctuations while driving future growth.

Policies being implemented to address the economic challenges include steps to strengthen the local economy, the small and medium enterprise segment, the agriculture sector, export competitiveness and tourism, while accelerating public disbursement and attracting private investment, he said.

The government has proceeded with many major infrastructure projects to lay foundation for future growth including approval of some 2,000 kms of double track trains, a high-speed rail to link three airports, an increase airport capacity and an unprecedented expansion of Bangkok’s mass transit network.

“This is the best time for companies to invest in Thailand,” said Kobsak.

Deregulation of outdated laws to ensure Thailand maintains its attractiveness and competitiveness for investors and visitors alike is another policy priority, he asserted. Burdensome immigration reporting requirements is among an example cited that will soon be revamped and improved with the help of technology, he said.

Thailand Board of Investment (BOI) also supports the economic growth. Investment applications filed through the BOI in 2019 exceeded the target of 750 billion baht, reaching 756.1 billion baht (25 billion USD), Ms. Duangjai Aswachintachit, the BOI Secretary General told the same briefing. Out of the total value of these applications, 506.2 billion baht, or 67% are of foreign direct investment. China ranked the first source of incoming FDIs with 8.6 billion USD, followed by Japan and Hong Kong at 2.4 billion USD and 1.2 billion USD respectively.

In terms of trade and exports, Ms. Pimchanok Vonkorpon, Director General, Trade Policy and Strategy Office, at the Ministry of Commerce, said Thailand is still performing well compared to many other countries despite the weakening global trade and challenging times in the past two years. Interestingly, items such as fruits and vegetables, beverages, cosmetics, fashion, costume jewelry, as well as big bikes, represent a growing portion of Thai exports, she said.

“These items accounted for 6.5% of total exports last year,” said Pimchanok, adding they are coming very close to the country’s major exports, such as refined petroleum and chemical products which account for 11% of total exports in 2019.

Asked why Thailand’s GDP is lagging behind some neighboring countries, Kobsak admitted that the lack of major investment in the past 15 years has affected the country’s economic development and reaffirmed that the present public and private investment will come into effect within five years. 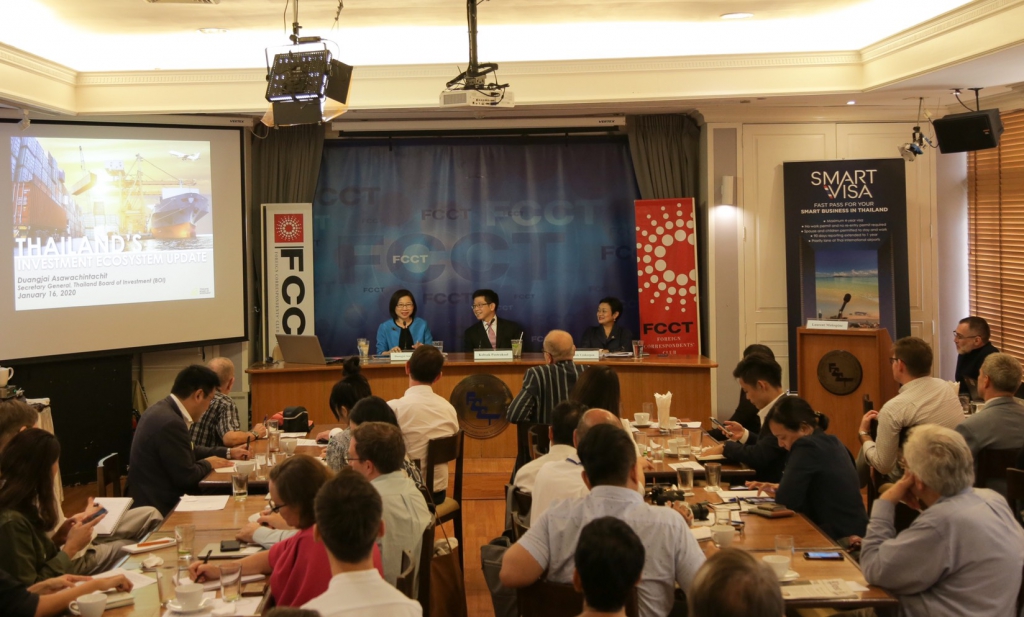 As Asia will be the center of gravity of growth for the next 20 years, “if you need to be in Asia, Southeast Asia is the place to be”, concluded Kobsak, adding that Thailand’s competitive advantages are its strategic location, comprehensive supply chains and improving connectivity.