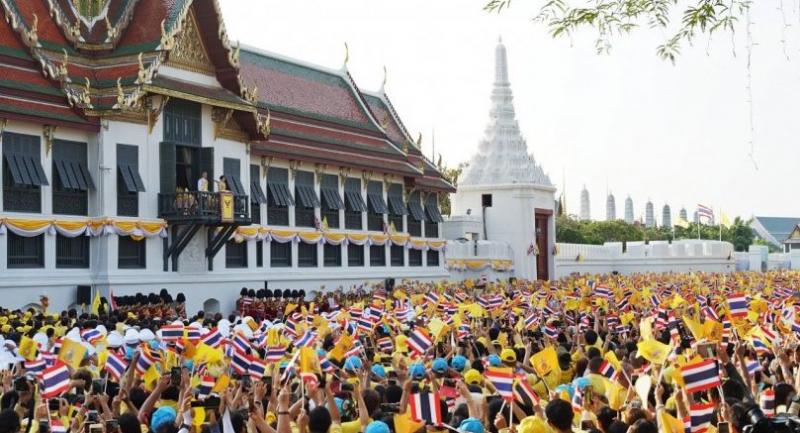 AS THAILAND moves forward under a new reign, prominent figures expressed their gratitude towards the new King after observing the three-day Royal Coronation. “We are incredibly grateful and overjoyed to have witnessed His Majesty the King’s grace on this auspicious occasion that brought great pride to Thai people, who are blessed to be under his reign,” said Suthichai Chirathivat, chairman of the Central Group. “We are committed to living our lives and conducting our business with honesty and to following His Majesty’s guidance in contributing to the development of the Thai society.”

Chadatip Chutrakul, chief executive officer of Siam Piwat, noted that Thais were very fortunate to have been born under a gracious reign in which the King has devoted himself to ensuring people’s happiness and prosperity.

“It is our duty to commit ourselves to do good deeds as best we can as well as preserve and pass on our unique culture as our heritage. We should also join hands in praising the country’s three core institutions – our nation, our religion and the monarchy. For this auspicious occasion, I would like to express my deepest gratitude and very best wishes. Long live our beloved King,” said Chadatip. Supaluck Umpujh, the chairperson of the Mall Group, said that having a chance to witness the coronation ceremony was the peak of her life.

“The ceremony is a historic event. We, Thai people, have been given the great opportunity to witness this unforgettable moment. This is a once-in-a- lifetime event and makes me be very proud to be Thai,” she says.

Avasada Pocmontri, a vice honorary-consul of the Kingdom of Lesotho in Bangkok, said she followed the three-day ceremony with great pride.

“The rich, traditional ceremonies are magnificent, beautiful and sacred. In 1950, my mother, MR Kitivadhana Chaiyan and my grandfather had the chance to be present at King Bhumibol Adulyadej’s coronation ceremony. My mother was among the ladies in waiting bearing symbolic items during the Assumption of the Royal Residence ritual. She was the person who held a cat that was believed to repel any maleficent forces. My family has always been loyal to the Chakri Dynasty. It’s in our blood and will never fade away.” Gloyta Nathalang, senior vice president of Corporate Communications of BCPG, said that she and her husband were among the crowd greeting His Majesty on the second day of the ceremony, when the monarch was carried in a palanquin on a procession from the Grand Palace to three temples.

“Though we spent hours and hours waiting for the procession to pass through, it was nothing compared to what His Majesty had been going through in this heat during the auspicious ceremony. He has clearly shown the makings of a true king. I’m proud to be his loyal subject,” Gloyta said.

“The past few days have reminded me of one of the most popular novels, ‘See Pan Din – the Four Reigns’. Mae Ploy, the lead character, lives through the transitions under the reigns of four Chakri kings. The story shows how she grows up as a loyal subject and why the king is a strong pillar for the country and the people. I wondered how she coped with the transitions, from one reign to another, on four occasions. I started thinking about the current transition with anxiety, but as the days went on, the feeling changed to warmth and pride.” Thongma Vijitpongpun, chief executive officer of Pruksa Holding Plc, said he rejoiced as he watched the ceremony being broadcast on TV, particularly when the King issued his First Royal Command, saying: “I shall continue to preserve and build the Royal legacy and shall reign with righteousness for the benefit and happiness of the people forever.”

“The coronation ceremony illustrates the country’s long-held traditions and centuries-old rituals and how Thais are still closely bound to the monarchy. Meanwhile, it’s a rare chance to see the country’s intricately crafted objects and architecture that are masterpieces of the artisans. Bangkok’s beautiful landscape was also highlighted, and that can certainly promote tourism.”

Issara Boonyoung, chief executive officer of Kanda Group, said this event proves that Thais are a united people and that the monarchy is still the core of Thailand in the midst of political uncertainty.

“The King’s coronation proves that the Thai people are still closely bound to the monarchy and promotes Thailand’s history and culture that is unique and different from that of other countries,” says Issara. Living under the reigns of Kings Rama VIII, IX and now the current monarch, Kitti Chambundabongse, 74, chairman of the advertising agency Spa Hakuhodo, said: “Watching King Rama X come to the throne is as amazing for all Thais as it is to all the foreigners living in our country. It is a once-in-a-life time experience to see and witness a beautiful and historical change in our Chakri Dynasty. I am glad that I have lived through the reigns of three kings.”

Laong Wongthongsalee, the 90-year-old founder of Chanthorn Restaurant in Chantaburi province, said this coronation was the pride of the nation.

“It reflects the country’s dignity, unique culture and tradition. I wish the monarch good health and a continuation of his virtues of kingship as he proclaims in his Royal Command,” Laong said. Surangkana Wayuparb, executive director and chief executive of Electronic Transactions Development Agency under the Digital Economy and Society Ministry, said the coronation showed her many things, from the King’s resolution to reign the country with righteousness to the proper protocol being observed by every member of the Royal Family.

“The ceremony was fascinating and depicted our deep roots in history and culture as well as the unity of the Thai people. I am proud to be Thai, and a humble servant of two monarchs – late King Bhumibol and now King Maha Vajiralongkorn,” Surangkana added. Nualphan Lamsam, president and chief executive officer of Muang Thai Insurance, also said he is |proud to have been born a Thai under the reign great kings.

“I promise to do good deeds, behave well and live a life that is useful for the country and society,” she said.

ML Pongwarin Kitiyakara, who had the chance to participate in this royal ceremony, noted that the ceremony is unique and reflects the uniqueness and beauty of Thai culture and tradition.

“I think it is the duty of Thai people to support this beautiful culture and repay the kindness of the monarchs who have protected the country and the people for a long time. We the people are like the King’s children, so we will take care of our father forever.”

Kanita Tungwarapojwitan, deputy managing director, Intage Thailand ltd said, "When His Majesty uttered his proclamation, the First Royal Command, “I shall continue to preserve and build upon the royal legacy and shall reign with righteousness for the benefit and happiness of the people forever”, I felt that the country’ s monarchy was perfectly complete. It is a great merit to be born as a Thai under the Chakri Dynasty and by following the royal coronation ceremony, the wisdom of all the Kings in terms of the Thai nation, its culture and heritage is underlined. Long Live the King."