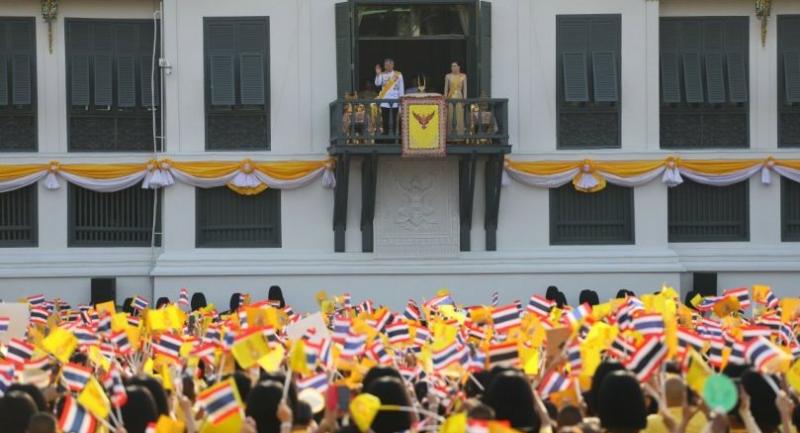 AFTER TWO years of mourning following the passing of HM King Bhumibol Adulyadej (Rama IX), Thais cheered with joy and hoped for a glorious and peaceful reign under the new monarch, His Majesty King Maha Vajiralongkorn, whose three-day coronation ceremony ended yesterday in keeping with centuries-old practices and customs.

Yesterday – final day of the three-day ceremony – a sea of yellow-clad people gathered at the Grand Palace and nearby areas to greet their new monarch when he granted audience from the balcony of the Grand Palace’s Suddhaisavarya Prasad Throne Hall, the same venue where his parents – King Bhumibol and HM Queen Sirikit – gave audience on May 7, 1950. Nattamon Thamjumras, 61, a provincial manager at AIA Insurance Co, travelled from Nonthaburi province to attend all three days of the ceremony.

“It’s a once-in-a-lifetime event after seven decades of late King Bhumibol’s reign. We only saw old pictures of the late King’s coronation ceremony, and I don’t know if I’ll get a chance to see it again,” she said. “On Saturday, I boarded a boat from Nonthaburi at 5am to Sanam Luang to be among the crowd of well-wishers during the King’s purification bath, the anointing ritual and the investiture ceremony,” she said. Yesterday, she arrived at Grand Palace at 8am with the hope of catching a glimpse of His Majesty after missing the chance to see him during the royal procession on Sunday. “I am full of hope to express my loyalty to our King when he comes out to grant a public audience in the evening,” she added. Seubsak Submoon, a 39-year-old teacher from Ayutthaya province, and his colleagues were among the thousands who took a place in the front of the Grand Palace early yesterday to catch sight of the King during the public audience. Ladda Weerapong, a 63-year-old housewife from Nonthaburi province, and her friends attended the royal land procession on Sunday and returned yesterday to join the concluding day of the Royal Coronation ceremony.

“I’m overjoyed to have had a chance to greet the monarch from up close. Two years ago, I had joined the cremation ceremony of King Bhumibol as a Red Cross volunteer,” said Ladda. Meanwhile, Gowit Janmee, a 30-year-old lawyer who is also an amateur photographer, hoped to capture the historic moments in images. “Monday is my day off so I decided to get as close as possible to the balcony of the Grand Palace’s Suddhaisavarya Prasad Throne Hall to capture the historic moment of the King and Queen granting a public audience. We all used to learn about the Royal Coronation ceremony through black-and-white photos and historical books, so this is a great opportunity to capture this history with my own hands,” he said.

To Richard Kelleher, a foreign visitor, the coronation ceremony was an amazing event. “I’m from the UK and my country has a monarchy, too. So we have the royal family as well. We have the queen and you have the King, a lot of similarity. To have a monarchy institution, I don’t know how you think, but for my country I think we need this institution. The monarchy gives you identity, your nation and traditions and culture because a lot of traditions come from royal connections. I’ve been travelling around Thailand since last month, but I decided to come back to Bangkok to attend the coronation ceremony of your King because it’s a historic event,” Kelleher, 59, said. Famous actor Funden Chanyathanakorn, who spent 23 years working as a rescue volunteer, also joined in the momentous event by joining veteran doctors from Lerdsin, Nakhon Pathom and Saraburi Hospitals to set up a mobile clinic to provide first-aid during the three-day ceremony.

“Our team has worked together since the royal cremation of the late King Bhumibol, as part of the project ‘We Do Good by Heart’. This is a once-in-a-lifetime experience to watch beautiful traditions, culture and history through our own eyes,” Funden said.

With the temperature hitting 38 degrees Celsius on all three days of the coronation ceremony, local residents in yellow shirts made regular visits to the medical booth to get herbal inhalers or drinking water.

“During the royal cremation of King Bhumibol, we were overcome by sadness but the Royal Coronation ceremony is about celebration. I’m lucky to have been a part of history. Other foreigners might never have seen an ancient ceremony like us, so they might not understand how we feel. Though we encountered several political conflicts, our centuries-old traditions and customs have not faded. We should learn and live consciously,” Funden said. Siriporn Maiman, a 27-year-old teacher from Chachoengsao province, also worked as a volunteer during the royal cremation ceremony of King Bhumibol and expresses loyalty to the monarchy.

“On Saturday, I watched the purification bath and the anointing water ritual on television. The last day of the ceremony is also a historic event, which I won’t miss. When I’m in the actual ceremonial site, the feeling is different from what we see on TV. Here, we have companions who have the same heart,” said Siriporn.