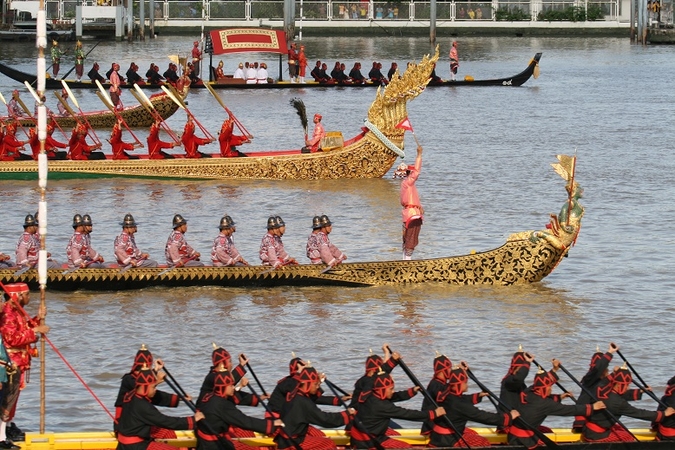 In preparation for the historic Royal Barge Procession of the current monarch, the special force overseeing the procession – under the administration of the Royal Thai Navy – has invited people to witness the important occasion, and have revealed the arrival time of the King on the official day.

Gaiboon Suatsong, the commander of police strategy for the occasion, was joined by related teams at a Thursday press conference held at the security and traffic management centre. They invited people to watch the 12 rehearsals of the royal barge procession, as well as the official procession on October 24th, from both sides of the Chao Phraya River.

Throughout the time, free shuttle buses will run from the Pinklao Bridge pier to the Tha Prachan and Maharaj piers from 10.30am to 7pm.

The Royal Thai navy will be responsible for the royal ceremony and security on both rehearsal day and the official day. His Majesty King Maha Vajiralongkorn Bodindradebayavarangkun and Queen Suthida Bajrasudhabimalalakshana will arrive at Thavasuki at 3.30pm on the official day, and so everything has to be completely prepared before 3pm. The royal barge procession will take 45 minutes to an hour depending on the river current as Thailand’s rainy season has begun, he said.

Teeraphat Prayusid, a representative of the inspector general, invited people who live near Chao Phraya river to keep the area clean, and added that volunteers have been assigned to help clean up the riverside area. Volunteers will also help manage traffic both before and after the ceremony, guiding people who come to witness the historic occasion.