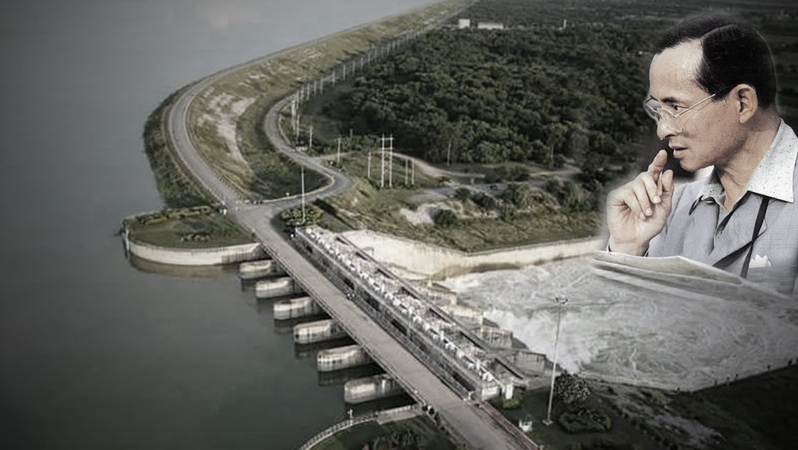 Of the 4,810 royally initiated irrigation projects, only eight were actually given auspicious names by King Rama IX himself, said Thongpleo Kongchan, director-general of the Royal IrrigationDepartment.

The projects named by the late monarch are:

King Rama IX renamed the dam on January 16, 1986 before presiding over its opening ceremony the following month. Formally known as Mae Ngad Dam, it is based on the Nam Ngad River, a territory of the Ping River. The dam is located in Chiang Mai’s Mae Taeng. The Electricity Generating Authority of Thailand (Egat) built a hydropower plant at the site in 1985, with a generating capacity of 9,000 kilowatts. It is able to produce 19 million kilowatts per hour.

This 66-metre wide, 610-metre long dam is based on Mae Kuang River in Chiang Mai’s Doi Saket district. The dam, which was named by the late monarch on February 18, 1995, supplies water to 13 sub-districts in Chiang Mai and Lamphun, covering approximate 175,000 rai. This project was part of the Mae Kuang basin irrigation development plan after the construction of the Pha Khao Dam in 1935, which was later renovated, and its capacity expanded to cover 72,750 rai. After the late king inspected the renovation work on March 4, 1976, he briefed the Royal Irrigation Department on developing the Mae Kuang River and finding ways of providing farming land to the people.

The royally initiated project, completed on February 19, 1989, was personally named by King Rama IX on November 25, 1999. The project was designed by the monarch to solve both water shortages as well as floods in Bangkok and surrounding areas brought by the overflowing Pasak River. The dam, located in Lop Buri’s Phattana Nikhom district, is believed to be the longest in the country and can store an average of 2,400 million cubic metres of water a year.

The name of the project, meaning the ability to successfully separate fresh water from saltwater, was given by King Rama IX, when he initiated the project. It was the primary chapter of the Pak Phanang River development project and construction began on October 1, 1999. The water gate blocks seawater from flowing into the river and stores fresh water for human consumption. It also supports the natural resources in the Pak Phanang area.

Located in Nakhon Nayok’s Muang district, this project was initiated by the late monarch to help alleviate the problem of water shortage in Nakhon Nayok and other provinces nearby. The dam can hold up to 224 million cubic metres of water.

Located in Phitsanulok’s Wat Bot district, this dam can hold up to 769 million cubic metres of water and irrigate about 151,166 rai of farmland in Khwae Noi irrigation area and 250,000 rai in the Chao Phraya irrigation area during the dry season. The project was completed in 2008, after King Rama IX initiated the project on December 4, 1995.

This project located in Nakhon Phanom’s That Phanom district was also initiated by King Rama IX and completed on September 12, 2011.

The late monarch initiated the diverting of water from the Huai Pai Reservoir to replenish the Lampayang Reservoir in order to expand irrigation areas as well as solve the problems of the flooding and water shortage in Kalasin’s Khao Wong district.