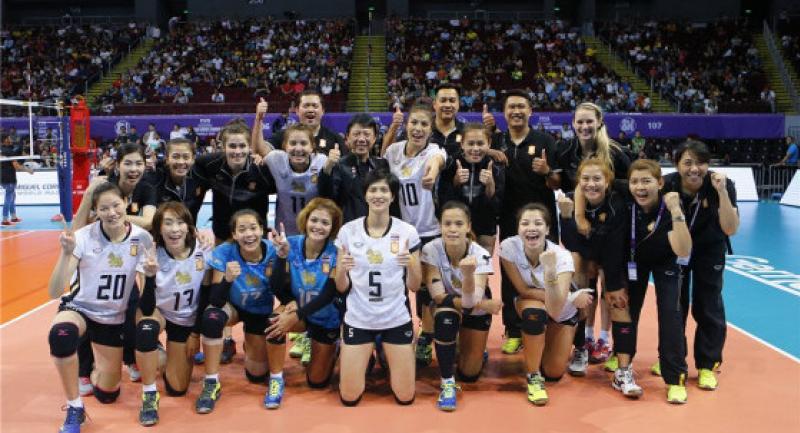 Bangkok Glass refused to crack even against the solid pounding of host team PSL-F2 Logistics Manila to prevail 3-0 (25-16, 25-23, 25-20) for their first win in the tournament and a seventh place finish at the 2016 FIVB Women's Club World Championship at the Mall of Asia Arena in Manila, the Philippines on Sunday.

The 2015 Asian Club champions and successive two-time Thailand League winners, displayed unforgiving floor defense and leaned on their sheer quickness to take full control despite the big crowd cheering for the hosts.

PSL-F2 fielded an all-Filipino team in the third set, which displayed spunk but still fell short against the Thais that had American Ashley Frazier all along.

Bangkok Glass tallied 57 attacks points compared to PSL-F2's 47 and had fewer errors than the host club, 10-18.

PSL-F2 Logistics Manila dropped all their five games in the tournament to rank 8th.

After the match, Bangkok Glass’ coach Kittipong Pornchartyingcheep and captain Pleumjit Thinkaow praised the great fighting spirit that PSL-F2 Logistics Manila gave them before they completed the sweep of the home team in the FIVB Volleyball Women’s Club World Championship at the Mall of Asia Arena on Sunday.

“We're very happy with how we played the game against the Philippine team (PSL-F2 Logistics Manila). It was really difficult because they gave us a good fight but today we played good,” Kittipong commented.

Pleumjit Thinkaow added, “Today we are very happy to win our last game here in the Club World Championship. It was very difficult against the Philippine team because they have good hands and good fighting spirit. So there was a little pressure on us today.”

Moro Branislav, PSL-F2 Logistics Manila coach: “I want to thank all the spectators who came today for the local team, and for all the Philippine Superliga staff who organised this tournament.

“I respect Bangkok Glass and their big team, but I promise their captain that maybe one day we'll win against them in future Asian competitions. They have big international players and some are playing for the national team of Thailand. They are one of the best teams in the FIVB.”

Rachel Anne Daquis, PSL-F2 Logistics Manila captain: “We’re so happy with the result. We came very close and celebrated every point because coach Moro wants a high morale for the team. And we proved we can play against the best teams without giving up, especially when we played the third set with an all-Filipina crew.

“I am confident our future volleyball players will play more games of this calibre. Our motivation to reach this kind of tournament will inspire our young athletes for sure. It’s different when we see Filipinos competing in this level of games. We fight to the last. I am sure they will reach better heights if this kind of programme continues.

“We need to play more tournaments of this kind. Let’s continue with this. This tournament is an eye-opener to all of us.”

Jovelyn Gonzaga, PSL-F2 Logistics Manila player: “I thank the Philippine Superliga for the opportunity this tournament gave us. And also to the crowd which egged us to fight even when we were down. And to coach Moro who helped explore what’s left in our talent and let us prove that we can play against the world’s best players.”