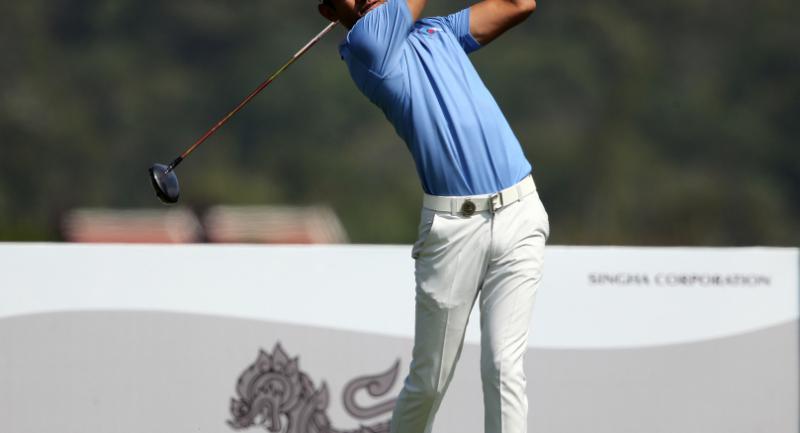 Hailing from Prachinburi, Raththee or formerly known as Pipatpong Naewsuk, sank six birdies against two bogeys for a midway total of 6-under-par 138 under the swirling winds at the par 72 7,249 yard lay-out.

“It was very windy today, so the game on the green was very crucial. I putted quite well to hit four under,” said Raththee who just competed in his fourth tournament after a neck injury break.

“I spent too much time with digital gadget and it took a toll on me. My neck felt stiff for four months. Now I become more careful when I use this stuff,” said the singles and team gold medalist from the 2007 SEA Games in Nakhon Ratchasima. Raththee has yet to win a tournament since winning the ADT at the Rancho Charnvee Resort and Country Club in Nakhon Ratchasima in early 2015.

“It’s hard to predict in golf as the last time I won I didn’t even expect it. My plan is to hit the fairways and try to make my putts. If I miss one putt, I have to be patient and keep trying.”

Peradol who was also in the same team with Raththee in the 2007 regional Games carded four birdies against two bogeys to surge to the joint lead.

“I didn’t have a good start by making two bogies until my first birdie came on the ninth. I tried to play safe as I’m not quite confident with my iron,” said the 26-year-old in search for his first win since 2010 at the Green Valley in Rayong.

“I’d love to end this drought. I will try to score on par 5 holes and keep my finger crossed that I can hit the iron better,” added Peradol who like Peradol also changed his name from Warut Chomchalaem for luck.

Overnight leader Udorn Duangdecha was bothered by the winds and difficult lines as he stumbled to a 73, dropping to lone third with 5-under-par 139.

After a slow start on Thursday, defending champion Kiradech Aphibarnrat finally got into the grove as he shot a 69 for two-day 140 for joint fourth with Chanat Sakulpolphaisan, two off the lead.

“I hit more birdies under the strongest winds I’ve ever seen in Thailand. Now I will have more hours to rest as I finished my round since noon,” said the Thai No 2 whose last title also happened on this course 13 months ago.

“The margin is not much and I still have the chance to catch up with the leaders. I really want to play well at home and defend my title.”

Truesports 5 will beam live coverage at noon on Saturday and Sunday.