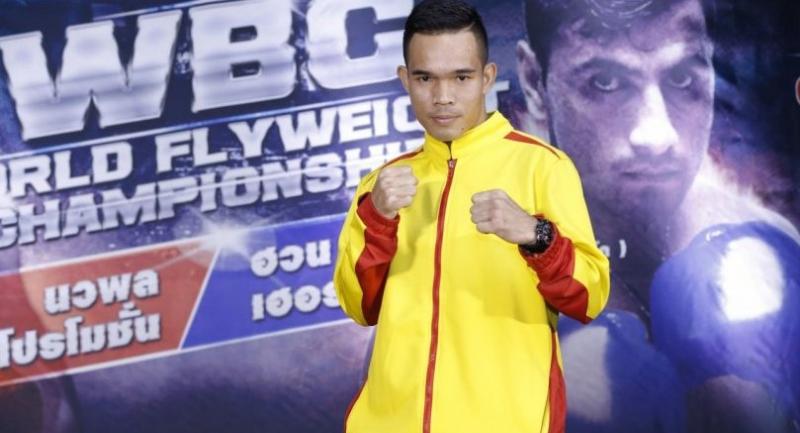 BEC-Tero Entertainment and Nakornloung Promotion announced details of the upcoming World Boxing Council World Flyweight Championship match between the #1 and #2 challengers in the world: Thailand’s own Nawaphon Nakornloung and Mexico’s Juan Hernandez. The fight will take place at Nimibutr Stadium, Bangkok on Saturday 4 March and will be broadcast live on Channel 3HD (33).

The WBC World Flyweight Championship title (112 pounds) is currently vacant as current champion Roman Gonzalez of Mexico has moved up to fight in the 115-pound Super Flyweight class, leaving the Flyweight championship belt open to the world’s top two challengers.

Suwat Liptapanlop said, “This WBC Flyweight Championship fight starts a new chapter for Thai boxing. It’s a chance for a Thai boxer to be WBC World Champion in the same weight class as the legendary Pon Kingpetch who won and defended this title three times. It’s been a long wait for a Thai boxer to again have the opportunity to claim the coveted belt.” He added that this was a rare opportunity for Thai sports fans to cheer one of their own in a WBC world title fight being held in Bangkok.

Mr. Surachart “Sia Hui” Pisitwuttinun added, “It will be a great fight. Nawaphon is a very exciting boxer. He’s on a 36-match winning streak with 28 knock-outs. He’s the hope of Thai boxing. He’s focussed and committed. There will not be any room for mistakes. Juan Hernandez is a strong boxer and we hope that all of Thailand will come out to support Nawaphon and cheer him on to the WBC World Championship belt.”

Don’t miss this exclusive chance to watch a WBC World Championship event live with the WBC World Flyweight belt up for grabs on Saturday 4 March 2017 at Nimibutr Stadium from 6pm (doors open 5pm) or catch the fight live on Channel 3HD (33). Tickets start at just Bt100 and go on sale on 27 January at all ThaiTicketMajor outlets. For more information, please log on to: www.bectero.com and www.thaiticketmajor.com  or call: 02-262-3838.