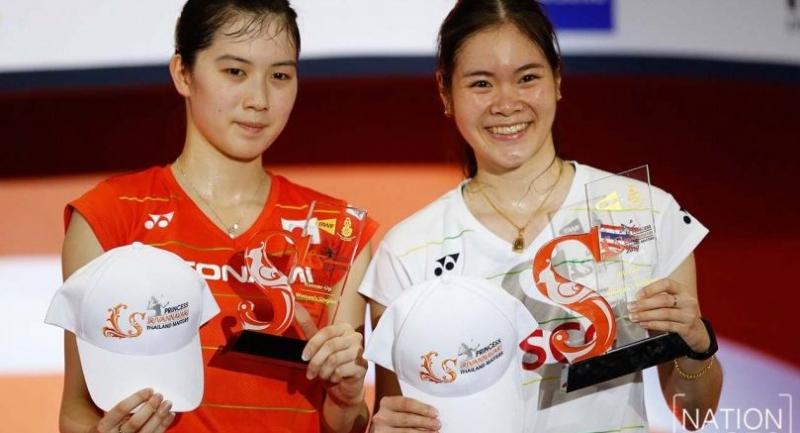 Top seed Busanan Ongbamrungphan produced a spectacular all court performance settle score with Japanese pin-up girl Aya Ohori for her first home title during the final rounds of the Princess Sirivannavari Thailand Masters 2017 at the Nimitbutr National Stadium on Sunday.

In a rematch of the October’s Thailand Open final won by the Japanese world No 20, Busanan, in her seasoning opening tournament, combined an all court game and super solid defence to return the favour to her opponent in straight games 21-18 21-16 to make the 2,000 fans in the house in jubilant.

After winning three previous titles offshore in Malaysia (2012), Netherlands (2013) and Indonesia (2016), she finally triumphed on homesoil after losing twice in the Thailand Open finals in 2013 (to Ratchanok Intanon) and last year to Ohori.

“Each title is special in its own way but this one makes me three times prouder than my previous ones. It’s my dignity and above all I made the Thai fans happy,” said the 20-year-old who fought back from 0-6 behind in the second game to win the match in 57 minutes.

“I lost my concentration for a moment but I had to run for every shot because the crowd was really behind me. I chased down all shots no matter how far they were from my reach,” Busanan said.

Several line calls were questioned by both Busanan and especially Ohori who disagreed with the chair umpire and lost her concentration at the later stage of both games.

“Each point was so important for both of us under this tense situation. But no matter what the umpire decided, we had to accept that. On the end we will never be able to change his judgment,” added Busanan who leaves for the next event in Vietnam this morning.

She hopes to finish the top 10 this year and produce gold medals for Thailand in the SEA Games in Kuala Lumpur.

In women’s doubles, top seed Chen Qingchen and Jia Yifan of China used a sly game plan by unleashing a series of drop shots to break the rhythm of the second seed Puttita Supajirakul and Sapsiree Taerattanachai and won the match 21-16 21-15 in 47 minutes.

“We admit that we were below our standard today,” said Sapsiree. “The Chinese pair came up with a good game plan. I have to give them credit for that,” added the towering player who was playing with a left knee injury.

Puttita said: “It’s a good start of the year to reach a final. We hope to win the SEA Games gold medal and make the Masters in Dubai at the end of the year.”