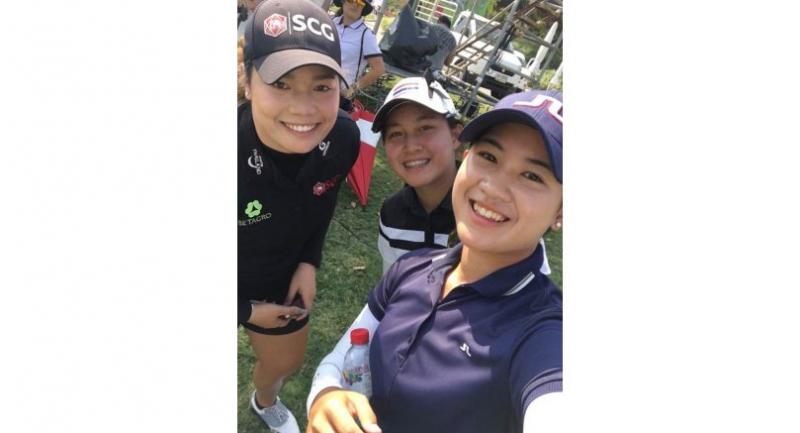 The former SEA Games gold medalist, one of the four locals receiving invitation into the US$1.6 Million event, is in her first ever LPGA event which features top 60 players from the money list and 10 sponsor invites.

The teenager already tested the par 72 6,642 yard course twice, 18 holes on Monday and nine yesterday alongside the 2013 runner-up Ariya. It was a dream come true for the Thai who never before joined a practice session with the five-time LPGA victor.

“I was so excited. She really hits so well,” said Pajaree who had three local titles to he credits last season.

“She understood how it felt to be playing in a big tournament for the first time. But she said after the first hole, the excitement will subside bit by bit. She told me to stay focused and give my all out there,” added the American School of Bangkok student.

After a few days at the course, Pajaree has grown her fondness on the layout of the Old Course which is considered by one of the most challenging in the Kingdom.

“The course is in perfect condition. The green sets up pretty fast. If you approach to the wrong position, it will be very difficult to get back. You need to have a good game plan and stick to it well,” she added.

The local rising star, however, may not set an ambitious hope that she would be in the last squad by Sunday but she is confident she can shoot under par every day if she can live up to her level.

“Although I don’t have set what position I want to finish, I hope I can shoot good scores after four days. I think I can play well on this course.”

Jointly organized by Honda Thailand and Channel , the project will allow Marbprachan students to lend these bicycles to go to school for free. Other necessary parts such as  wheel locking tools, pumps and maintenance tools have also  been given away along with the bikes. Pitak Pruittisarikorn, Chief Operating Officer of Honda Automobile (Thailand) Co., Ltd also joined the activity.

In the afternoon, Women’s PGA Championship winner Brooke Henderson and four other fellow players  Sandra Gal of Germany,  Alison Lee and Su Oh of Australia and wildcard entrant Porani Chutichai joined the shooting in Thai traditional costume which is usual promotional activity of the tournament.