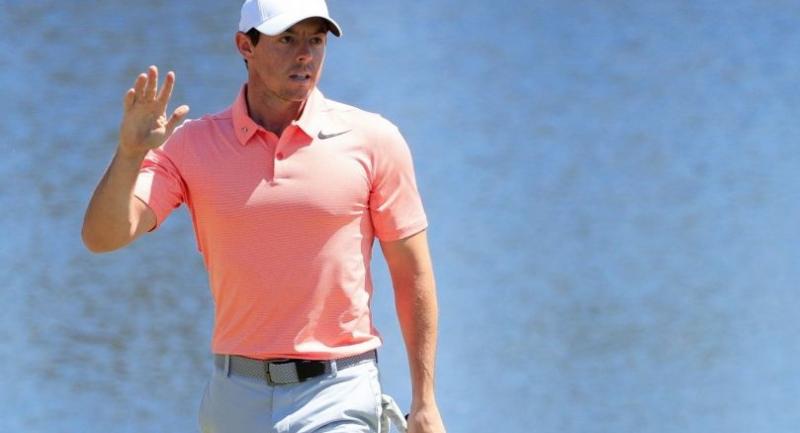 MIAMI, March 18, 2017 - Rory McIlroy made a charge into contention but Charley Hoffman closed with a 70-foot birdie putt to match Kevin Kisner for the lead after Saturday's third round of the Arnold Palmer Invitational.

Hoffman curled in the shot of the tournament at the US PGA event on Orlando's famed Bay Hill course to cap a closing run of three consecutive birdies to join his US compatriot on 11-under 205 through 54 holes.

McIlroy, preparing his bid for a Masters win next month that would give him a career Grand Slam, fired a seven-under par 65 to stand on 210 in a share of eighth after a 74-71 start to the week.

"At least I've given myself a decent chance," McIlroy said. "At least I'm in with a shout and if I get off to a fast start I can be right in there.

"Hopefully the wind starts to get up and I can be somewhere close to the lead tomorrow."

And it was a good sign as he looks toward a possible fifth major title and quest for a first green jacket in just three weeks at Augusta National.

"It's sort of a score I was waiting for," McIlroy said. "I felt like it was in there. It was just a matter of putting it all together and today it did that."

After short birdie putts at the par-5 fourth and sixth holes, McIlroy roared into the hunt with three consecutive birdies to begin the back nine, the last of them a 20-footer at the par-5 12th.

"I can take a lot from today," McIlroy said. "I put it in the right positions. I drove it better, gave myself a lot of looks, was smart when I needed to be.

"If I can continue to do that then hopefully I do have a good chance."

"Conditions changed a little bit," he said. "You've gone out the last couple days, it was a little bit cold. It was breezy, tough scoring conditions. I thought the guys that got up to like 10-under, they did really well.

"But today it presented us with an opportunity to go low, not much wind, warmer, the golf course played a little shorter as well. You could take it back and reach it at the par-5s.

"I just played better. I gave myself a lot of looks and holed some putts, which was nice to see."

Kisner missed the green to bogey at the par-3 second but answered with four birdies over the next six holes, his longest birdie putt in the run from 18 feet at the third.

Kisner opened the back nine with another birdie and added another at the par-5 16th but missed a seven-foot par putt in bogeying the 18th.

"There's no protecting a lead out here," Kisner said. "You've got to go out there and keep making birdies and that's what I'm going to attempt to do tomorrow.

"It's almost a perfect combination of playing tough but you can still have it if you can keep it in the fairway."

Kisner's last-hole mishap opened the door for Hoffman, who opened with back-to-back bogeys and added another pair at 14 and 15 before ending with a seven-foot birdie at 16, a 12-footer at 17 and his shocker at 18.

England's Tyrrell Hatton was among a pack in third, three shots adrift on 208, which included compatriot Matthew Fitzpatrick and Australian Marc Leishman.