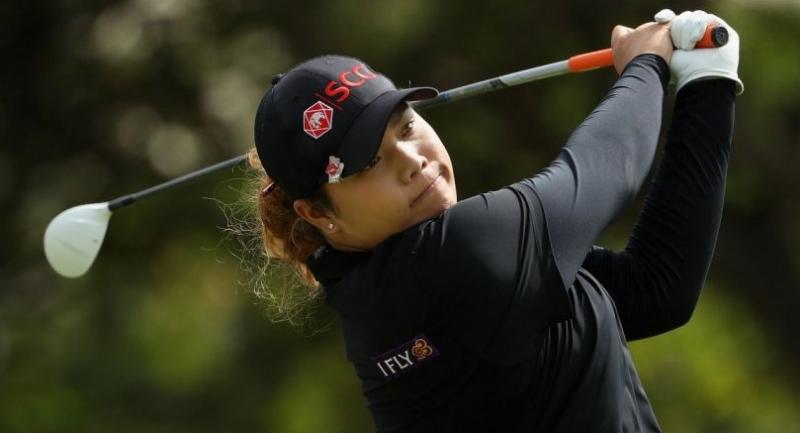 Ariya Jutanugarn trailed Japan’s Haru Nomura by one stroke after the midway stage of the Volunteers of America Texas Shootout at Las Colinas Country Club in Irving, Texas on Friday.

Nomura started Friday with a 1-under-par 35 on her front nine, but then she caught fire. She bogeyed her closing hole, the par-5 18th, but prior to that unfortunate error, she made six birdies, including three in a row from holes No.15-17. Her 65 was tied for the second-lowest round of the day.

“My mind was very calm today. It was windy, but I like windy and tough conditions,” said Nomura. “I putted well and shot pretty good today.” The Japanese’s overall score was nine under-par-133.

Sisters Ariya and Moriya Jutanugarn were both tied briefly on Friday, but the younger Jutanugarn ended up sliding just ahead of Moriya by the end of the day, thanks to her second 4-under-par 67 in a row. Ariya sits tied for second after two rounds, just one shot back of Nomura.

“Pretty good day today,” said Ariya. “I hit the ball pretty good on my front nine, made some putts today.”

However, Moriya got the better of Ariya on one hole at least, notching a hole-in-one on the par-3 13th. She used a nine-iron to make her second ace of the year (she also made an ace at the KIA Classic).

“I can hit it pretty straight, so it should usually be pretty close,” she said of her approaches. “It was lucky, but it was also a good shot.”

In another sister act on Friday, Jessica and Nelly Korda are both at 4-under through two rounds (tied for 12th) and were very close to being paired together Saturday. Elder sister Jessica shot 1-under-par 70 on Friday, while younger sister Nelly notched a 3-under-par 69.

“We raise each other’s game,” said Nelly of playing on the same tour as Jessica. “It’s great to have her out here and I’m really excited, and looking forward to the rest of the season.”

Suzann Pettersen, a 15-time winner on the LPGA Tour, shot a 6-under-par 65 Friday to leapfrog into third place. She opened her round with a bogey, but battled back with four birdies on the front nine before adding three more on the back nine.

American Dori Carter fired the round of the day, an 8-under-par 63, and made her first cut of 2017. She’s tied for 16th after Friday’s round, and admitted it was nice to be having fun on the golf course again. She had a 13-shot swing between her Thursday round and Friday’s blistering finish.

“That’s just golf,” she said. “I struck the ball well yesterday and I didn't get up and down, today I did. When I missed the green, I got up and down. And then I had some really cool long fringe putts. Putts started to fall and that just became exciting. So that was probably the difference between yesterday and today, I got up and down. I even holed out for an eagle today, things like that. I was always close and today was finally my day.”

Two-time winner of this event Inbee Park said some of her success on this golf course can be attributed to the fact that she just likes the layout here in Irving, Texas. Park fired a 4-under-par 67 on Friday and sits tied for fourth.

“I like this golf course,” said Park. “There are a couple of tough holes, tough driving holes because they have very slippery fairways. But except for that, I think it's a pretty good golf course. I was putting really good on these greens when I was winning, so hopefully I can drop some more putts on the weekend. The first two days was really good ball-striking days but the putting was just average, so hopefully it gets better.”

Christie Kerr, fresh off her 19th LPGA Tour victory two weeks ago at the LOTTE Championship, shot a 2-under-par 70, and her 5-under total through two rounds has her sitting tied for seventh.

Amateur Eun Jeong Seong from South Korea is also tied for seventh with Kerr and three others, including first-round leader Mi Jung Hur.

Paula Creamer withdrew citing illness after firing a 4-over-par 75 in round one.

Given the severe weather forecast on tap for Saturday afternoon and evening, the LPGA Tour will begin tee-times at 7:10 a.m. off No.1 and No.10 tees (similar to the first two rounds, and players will be in groups of three. Viewers will be able to follow the third round live on GolfChannel.com and the Golf Channel app from 1 p.m. to 4 p.m. ET, while it will be broadcast on the Golf Channel from 3 p.m to 6 p.m. on delay.