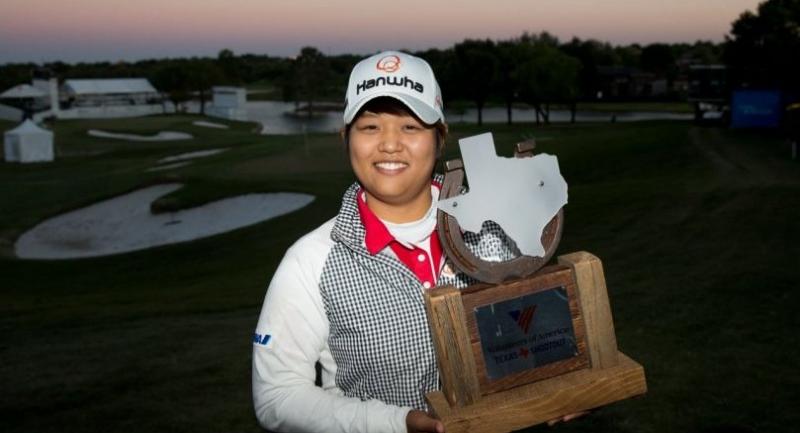 Haru Nomura of Japan poses with the champion's trophy following her playoff victory over Cristie Kerr in the final round of the Volunteers of America North Texas Shootout at Las Colinas Country Club on April 30, 2017 in Irving, Texas.

LOS ANGELES, May 1, 2017 - Japan's Haru Nomura birdied the sixth hole of a sudden-death playoff to beat Cristie Kerr on Sunday for the LPGA Texas Shootout title in suburban Dallas.

Nomura was the last woman standing on a brutally windy day that turned into even more of a marathon as she and Kerr both parred the first five playoff holes -- all played at Las Colinas Country Club's par-five 18th hole.

As they returned for one more time before darkness fell, Nomura gave herself an eagle chance and tapped in from inches for the birdie. She then watched as Kerr's birdie attempt from outside 10 feet slid by.

She had to dig deep to do so on a day when the scoring average was more than five strokes over par.

Nomura started the day with a two-stroke lead and did well in the conditions to finish the front nine in even par after one bogey and one birdie.

She made a 12-footer to salvage a double-bogey at 17, but that left her a stroke behind Kerr who had made the only birdie of the day at the par-three 17th.

After Kerr had completed her three-over 74 for a three-under par total of 281, Nomura birdied the 18th for a five-over 76 that forced the playoff.

The top two finished regulation two strokes in front of American Jessica Korda, whose two-over 73 gave her a one-under total of 283 -- the only other under par total for the week.