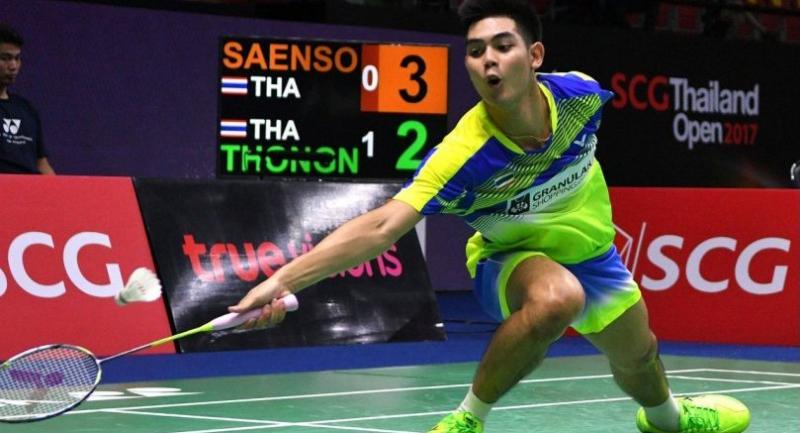 Hot shot Pannawit Thongnuam extended his winning streak to 10-0 after he knocked out defending champion and world No 11 Tanongsak Saensomsboonsuk 21-17 17-21 21-8 to book a semi-final spot of the SCG Thailand Open at the Nimibutr National Stadium on Friday.

The 21-year-old applied a good game plan, a combination of well disguised net shots and smashes, to break the rhythm of the Thai No 1 player and reached the semi-final stage of a Grand Prix Gold event for the first time in his career.

“I was so happy not because I won but it was because I was able to play exactly the same game like during the practice session. Both of us were quite careful with our shots. There were a lot of drop shots and smashes,’ said Pannawit who has won 10 straight matches since the Challenge event  in Trang last month.

The young gun has a big hurdle against India’s Sai Praneeth B. on Saturday. The world No 24 just won his first Superseries Premier in Singapore earlier this year.

“He beat me before (in a Challenge in Sri Lanka in 2015). With the confidence I’m having right now, I hope to give him a better match,” Pannawit said.

“Every time I play Nitchaon, I would be a bit concerned that she would keep me out of the comfort zone. But I was able to read her shots well today and managed to pull it off,” said the top seed who will play Beiwen Zhang of the US.

“She has improved a lot recently. She is very solid. I have to be really patient and come up with the top form against her,” the 2013 winner said.

Thai No 2 Busanan Ongbamrungphan also moved to the semi-finals after she handed a lesson to rising star Pattarasuda Chaiwan following a  21-16 21-12 win earlier in the day.

The world No 13 and two time-finalist was down 6-11 in the first game before she changed gear to oust the |16-year-old Pattarasuda, dubbed the next Ratchanok Intanon, to remain unbeaten at this venue since her triumph in the Thailand Masters in February.

“I started a bit slowly and she took the initiative. Then I stepped up the pace, being more aggressive while she started losing momentum,” said Busanan, who proved sharper in her shot selection and more consistent at crucial stages.

However, the 21-year-old from Nakhon Sawan complimented her young rival from Lampang province who will join her at the SEA Games in Malaysia in August.

“She has a great future and has good basics. It’s good to see young and upcoming players at this stage of a big event. She could be a great help for the national team in the future,” added the Thai No 2, one of the local hopes apart from world No 8 Ratchanok, to lift up the home title tomorrow.

“I have to tap into my good memories of the Thailand Masters going into the next match. I was so pumped up in that tournament because it was a home event and the fans were cheering me all the time,” added Busanan, who will play either second seed Saina Nehwal or Haruko Suzuki of Japan in the semi-final today.

Also staying in contention for a home title were the mixed doubles top pair Dechapol Puavaranukroh and Sapsiree Taerattanachai after they beat seventh seed Mark Lamsfuss and Isabel Herttrich of Germany 21-15 21-18 in 33 minutes.

“Despite some rusty play, we still managed to be in control throughout the match. We had beaten them in the Swiss Open so we knew how to tackle with them,” said Sapsiree, looking for her second title this year with the 20-year-old partner after their maiden crown in Basel in March.

“As we are the top seeds, our only goal is to win this week. If we can maintain our standard, we should achieve the target on Sunday,” said the Chon Buri-based Dechapol.

However in the men’s singles quarter-finals, young gun Kantaphon Wangcharoen had no answer to the power-play of third-seeded Sai Praneeth B of India who tamed the Thai teenager 21-16 21-17 to advance to the semi-finals. The 24-year-old from Hyderabad is looking to clinch his second title after winning his first Superseries Premier title in Singapore Open.