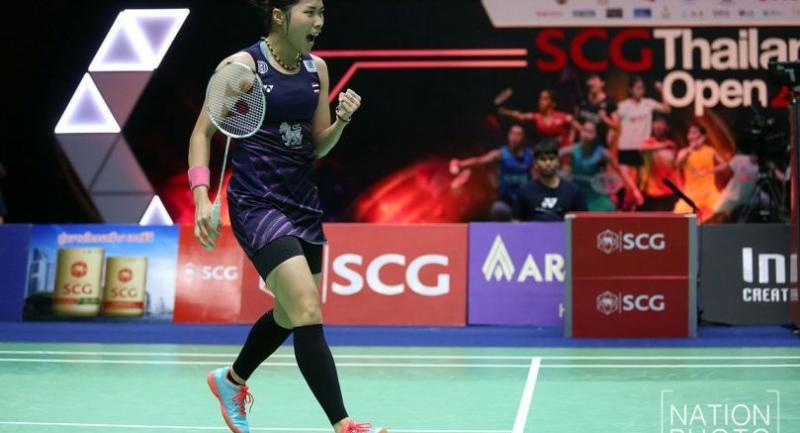 Former world No 1 Ratchanok Intanon and compatriot Busanan Ongbumrungphan will fight it out for the women’s singles title in the SCG Thailand Open at the Nimibutr National Stadium today.

It is a rematch of their 2013 title fight where the former prevailed.

Meanwhile, dark-horses Chayanit Chaladchalam and Phataimas Muenwong will be eyeing the biggest title of their career when they take to the court in the women’s doubles final today.

“When playing at home I always set the bar high. That is because the people want to see at least one Thai in the final. Although I put myself under pressure a bit, I tried not to get carried away and stayed in the game,” said Ratchanok, whose last title victory came at the Singapore Open in 2016.

“It’s nice to play Busanan again in the final. I need to balance my defensive and offensive game. She is a player with plenty of patience,” said Ratchanok, who has not lost to her young rival in the previous three meetings.

Inspired by the enthusiastic and cheering fans, Busnan finally turned the tables on former world No 1 Nehwal, who beat her three times in a row. The Thai has been on a hot streak at the venue, winning the Thailand Masters in February and winning all her matches so far.

“It’s a big relief to beat Nehwal. The fans were amazing. I didn’t want to lose and let them down,” Busanan said.

Chayanit and Phataimas came out of nowhere to reach the women’s doubles final, stunning sixth seed Du Yue and Xu Ya of China, the 2016 World Youth finalists, 21-19 21-9 for their first-ever final in a World Grand Prix Gold event.

“We are completely overwhelmed. This was beyond our expectations. After we reached the quarter-finals of the Singapore Open, we were inspired to work even harder, and it paid off,” said Chayanit, who will play Greysia Poli and Apriyani Rahayu of Indonesia for their biggest career title.

“We are underdogs but we will put up a great fight. We have to stay in the rallies with them and go for our shots when opportunities come,” said Phataimas, who will represent Thailand in the World University Games in August.

Top seeds Dechapol Puavaranokroh and Sapsiree Taerattanachai made an unexpected departure in the mixed doubles, losing to Goh Soon Huat and Shevon Jamie Lai of Malaysia 21-19 19-21 21-17.

In the men’s singles, Pannawit Thongnuam’s winning streak came to an end when the 21-year-old was stopped by third seed Sai Praneeth of India 21-11 21-15. The Chiang Mai-born has won 10 consecutive matches but found the Singapore Open champion a hard nut to crack.

“After I won the Superseries in Singapore, my confidence level went high. I have been training well for the event,” said the world No 24, who will face fourth-seed Jonatan Christie in the final. The Indonesian beat Joo Ven Soong of Malaysia 21-9 21-18.