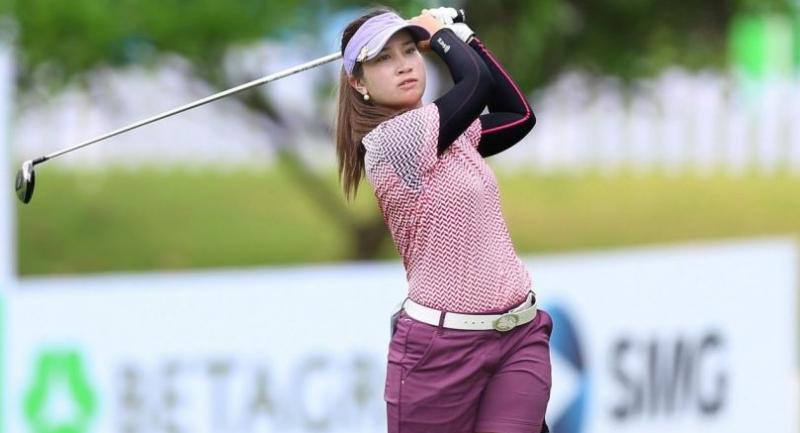 Kamonwan Luamsri shot her career-best score of 8-under-par 202 to capture her first title as a pro golfer in the Bt3 million Betagro All Thailand Championship at the Laem Chabang International Country Club yesterday.

The 22-year-old, who started the final round seven clear carded a 67, to beat amateur Sasikarn Somboonsup by eight strokes and win Bt32,000.

“I am quite excited as I never shot 8-under before in a tournament. I stuck to my game plan of hitting to the safe areas and making putts. Even though I had a seven-shot lead, I was not complacent. You never know, anything can happen in 18 holes,” said the Khon Kaen native, who has a history with the course, having missed the cut as a pro last year.

“I’m overwhelmed with joy. I have finally won a title as a professional. The feeling is amazing. I missed a few cuts on the pro circuit this year. In fact, I was a bit scared coming into this course. But in the end I pulled it off,” said Kamonwan, whose victory will boost her confidence going into the Ladies European Thailand at the Phoenix Gold Golf and Country Club in Chonburi next week. “My confidence level is high now. My mother made me practice hard before this week. Working hard makes you feel more confident and subsequently lead to good results,” said Kamonwan.

In the men’s third round action, another Khon Kaen native Tirawat Kaewsiribandit is in the hunt for his first All Thailand Tour title after firing a third round 64 for 17-under-par 193. He has a one-stroke lead over 18-year-old Suradit Yongcharoenchai.

“I started with a bogey but got my momentum back with a birdie and went on to putt well especially on the back-nine. One has to putt well on this course to stand a good chance of winning,” said Tirawat.

“My best result on the All Thailand Tour is a runner-up here in 2015. I feel confident with my game but I have to cope with my nerves tomorrow,” said the 27-year-old.

Suradit, who is also eyeing his first victory on the Tour, had a bogey-free 66. Overnight leader Jakraphan Premsirigorn and Danthai Boonma were at 195.

“I am beginning to dream,” said Suradit. “I don’t have much experience compared to others but I will try to stay focused and stick to my game plan by hitting the fairways. I look forward to having a good time playing alongside Tirawat and Danthai in the last group.”