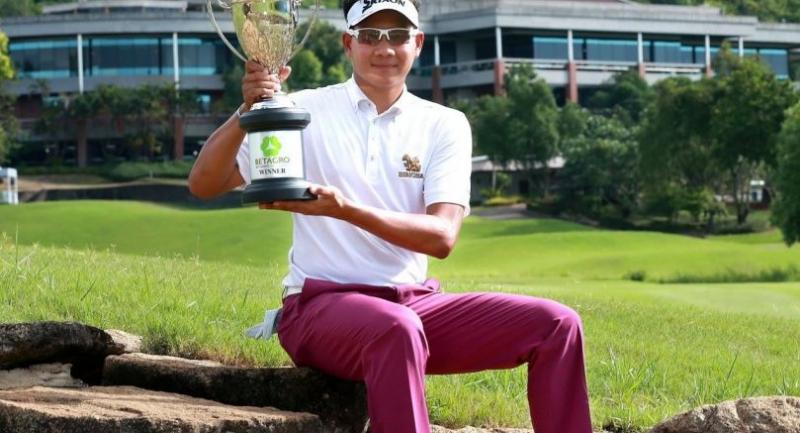 irawat drives away with title with a cool 64

Tirawat Kaewsiribandit was crowned the champion in the Bt3 million Betagro All Thailand Championship yesterday after shooting an error-free 64 to beat Suradit Yongcharoenchai by three strokes for his maiden title on the ADT and All Thailand Tours yesterday.

The 28-year-old was chased by his younger rival all afternoon and lead by one shot with three holes to play. But he dashed the hopes of the 18-year-old from Nakhon Pathom by sinking three straight birdies for 23-under-par 257 at the Laem Chabang International Country Club.

With his emphatic victory, the domination of Khon Kaen natives was complete. On Saturday, 22-year-old Kamonwan Luamsri, who also hails from the northeastern province, won the women’s title.

“I was rooting for her from the second round. After she won, I was determined to emulate her feat. I thought that it would be pride and joy for Khon Kaen to have two winners in the same tournament.  I’m so happy that I finally made it,” said Tirawat, who had lost to Rattanon Wannasrichan by two shots on the same course in 2015.

“I was a bit excited and nervous before the tee-off. But after I birdied the second, third and fourth holes, I felt that the momentum had swung my way.

“However, when he was breathing down my neck on the back nine, I started to feel the pressure. After I birdied the 17th to go two shots up, I was confident that the title would definitely be mine, said the protege of Thai golf legend Boonchu Ruangkit. “I feel very confident with my game. In fact, I have been hitting my shots better over the past 12 months and came close to winning several times. It is one heck an experience and everything just came together this week,” said Tirawat or ‘Oat’, who would go to next week’s All Thailand event in Nakhon Nayok Bt450,000 richer.

“I will focus on the Asian Tour where I wish to finish within the top 60 by the end of this year. If I reach that target, I would aim for winning a title next year,” he said.

Suradit, who hails from Nakhon Pathom, had to settle for runner-up for the third time after carding an error-free 66 for 20-under-par 260. He came second in the in the 2015 Singha Championship at Rayong Green Valley and at an ADT event in Singapore last year.

“I was second best on the greens. He was putting really well,” said Suradit, who will play an ADT event in Taiwan next week. Current Order of Merit leader Panuphol Pittayarat finished third along with Danthai Boonma 261.