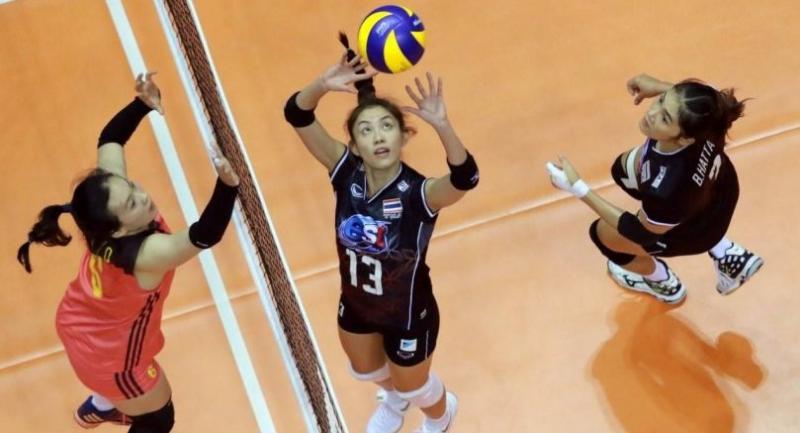 Thailand survived a strong challenge from China’s young bloods to overpower the defending and 13-time Asian winners in hard-fought five-set thriller 25-21 22-25 25-16 23-25 15-12 in the top 8 playoff encounter at the SMM 19th Asian Senior Women’s Volleyball Championship at the Alonte Sports Arena in Binan City, the Philippines on Sunday.

Thailand, current world No.14 and bronze medallists at the previous Asian meet in Tianjin, China two years ago, fielded a young, potential squad led by powerful Ajcharaporn Kongyot, Chatchu-on Moksri and Pimpichaya Kokram, while left-hander, 194cm-tall Chen Pei Yan, and Cai Xiao Qing, who won the Best Outside Spiker Award at the last year’s Asian Women’s U19 Championship in Nakhon Ratchasima as well as led China to capturing the title on home soil, led the China’s charge.

Thailand opened up aggressively in the first set, with Hattaya Bamrungsuk, Chatchu-on and Pimpichaya penetrating the Chinese defence with their powerful attacks to take an initial 9-8 lead. China, using their height advantage, blocked and attacked well to reduce the margin 21-23. However, from then on, the Thai side never looked back to win the set 25-21. Both teams came up with their utmost effort in the second set, which saw the on-going battle turn out to be a hotly-contested contest. At 21-21, Thailand sent in Wilavan Apinyapong to strengthen the team’s offence. Their intention was in vain when China went on their unchallenged attacks to win the set 25-22.

The third set became a one-sided affair when three veterans Pleumjit Thinkaow, Wilavan and highly-skilled setter Nootsara Tomkom combined well for the scintillating 25-16 win in the set. Holding a 2-1 advantage, Thailand needed one more set to take the match, but China taught them victory never comes easily. China took the lead 9-5 and stretched it to 13-11. Cheered on by the Philippine crowds, most of them are fond of Nootsara and Pleumjit, Thailand met China at 16-16. Nonetheless, China, whose height average is 182cm against the rivals’ 174cm, utilised their height advantage to attack devastatingly.

With Chen Pei Yan and Lei Yan Xi overcoming the smaller Thais, China marched on their consistent play to win the close set 25-23, forcing the battle to be decided in tie-breaker, which was won 15-12 by Thailand. Despite the win, a tough test awaits Thailand on Monday when they will go up against Japan, the team they lost twice at the last month’s FIVB World Grand Prix Preliminaries in the Netherlands and in Sendai, Japan. The Monday’s match will determine the Pool F winners to take on the Pool E’s fourth place in the next knock-out quarter-finals on Tuesday.