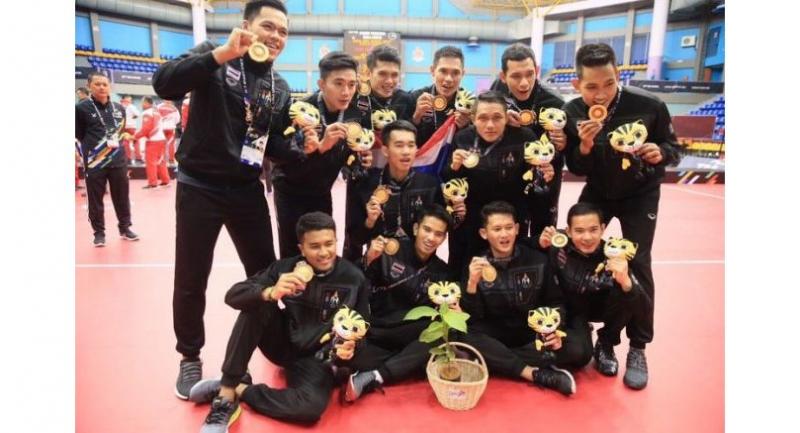 For the 16th time, Thailand dominated the men’s regu team event, dropping no sets throughout the tournament as they thrashed Malaysia 3-0 in their final match of the pool competition which saw Thailand finish on top from three straight wins (3-0 over Brunei and 3-0 over Indonesia earlier).

The domination over the hosts began with the team A competition which Thailand spearheaded by veteran star Pornchai Kaokaew struck the first blood with a 21-15 21-17 win. Thai team B then outclassed Malaysian side  21-10 21-6  which earned Thailand their 16th gold medal from this event regardless of the third regu match that still ended in the Thai favour 21-9 21-8.

“It was like a flashback from the 2000 Games when we beat Malaysia here for the gold medal. We were less under pressure coming to this tie as Malaysia lost one tie to Indonesia while we lost none,” said national team head coach Kamol Tankimhong.

For 36-year-old Pornchai, he has reaped a total 12 gold medals from eight SEA Games appearances. Still he longs for more.

“I’m so happy to win my 12th Games gold medal. I was a bit under pressure as Malaysia sent their best line-up for the first regu team. But we finally pulled it off as we are stronger in overall. For the next Games in 2019, I still want to compete,” said 36-year-old Pornchai who carried the national flag ahead of the Thai delegation during the yesterday’s athlete parade into the Opening Ceremony. The mission of Pornchai, who was bombarded with Malaysian fans asking for taking a photo in Kuala Lumpur is not over yet as he still has the men’s doubles team to compete.

The women’s polo team also successfully defended their gold medal after they beat Singapore 4-1 in their last preliminary game at the national Aquatics Centre. Thailand finished atop of the pool win three straight wins over Malaysia, Indonesia and Singapore respectively.

Head coach Daniele Ferri who came into the spotlight after he orchestrated Thailand to their first ever women’s water polo gold medal in the SEA Games history two years ago in Singapore was more than happy to have another mission accomplished.

“The girls were playing really well. Even they made some mistakes, I told them to perform like during the practice and they lived up to it,” said the Italian coach whose next goal is for Thailand to finish a top three spot in the Asian Games for a quota spot to the 2020 Olympics. By far Thailand have won three gold medals including the first one from men’s chinlone event 1.

In marathon, Natthaya  Thanaronnawat crossed the finish line third in women’s event to get the bronze medal while 36-year-old Boonthung Srisung had to pull out during the last 10km in the men’s event due to cramps.