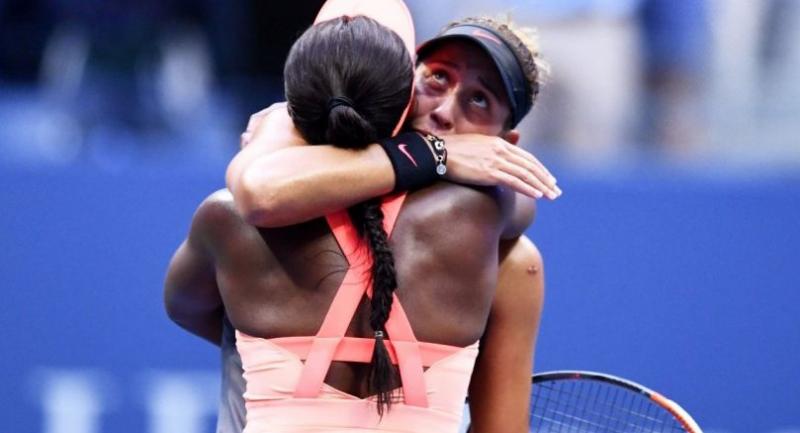 Sloane Stephens (L) of the US embraces compatriot Madison Keys after winning during their 2017 US Open Women's Singles final match.

NEW YORK, Sept 9, 2017 (AFP) - Madison Keys surveyed the wreckage of her US Open rout at the hands of close friend Sloane Stephens and told the new champion to foot the bar bill when the championship party starts.

But Keys fully expected her pal to make up for the pain she caused.

"Of course I will go to the celebration, I would 100% go. She can buy me drinks, all of the drinks," said Keys.

Stephens would have no problem in funding the party after her win on Saturday earned a staggering $3.7 million (3.07 million euros).

The 22-year-old Keys had undergone a second left wrist surgery after the French Open before winning a July title at Stanford.

But her problems on Saturday were more in the mind than with the body.

"I definitely think my play today came down to nerves and all of that, and I just don't think I handled the occasion perfectly," admitted Keys, playing in her first Slam final.

"I was obviously nervous all morning. Sloane's a tough opponent to play when you're not making a lot of balls, but then, at the same time, she's not going to miss, either.

"I didn't totally know what to do once I got on the court, which just intensifies those nerves even more. So I was definitely not feeling 100% good on the court at any point."

The brutal statistics illustrate her lack of cutting edge in the final.

Keys, the youngest finalist in New York since 19-year-old Caroline Wozniacki lost to Kim Clijsters in 2009, went into the match having fired 34 aces in the tournament.

"But if you told me as I was getting on a plane to go have my second surgery that I could have a Grand Slam finalist trophy in my hands at the end of the year, I think I'd be really happy.

"I think I mostly learned that I'm a fighter. No matter what, I can figure things out. In a couple of days, I will be really happy, but right now still a little bit disappointed."

Keys said she was not surprised that Stephens had become a first-time Grand Slam champion even if her friend was ranked at 957 just under two months ago after missing 11 months with a left foot injury.

"I don't think as a 13-year-old you have that ability to think that far in the future," she added.

"But when she made her semi-final run in Australia (2015), I think we all saw how great she was -- I'm definitely not surprised that she was able to do this."

Tags:
Madison Keys Hurting Keys drinks are on you