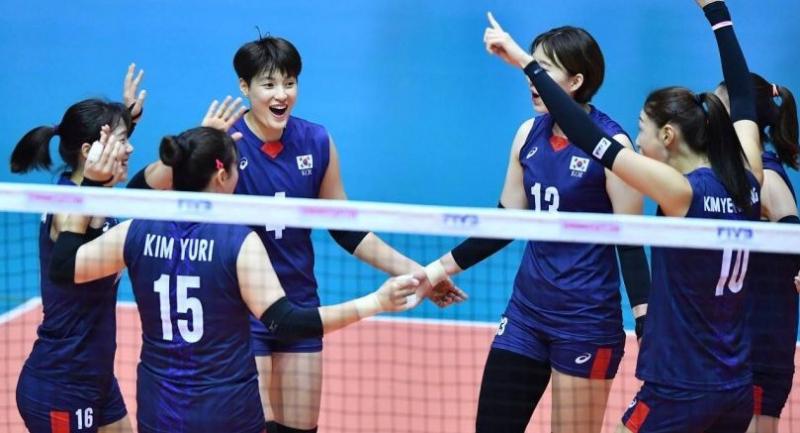 Nakhon Pathom - Prolific Kim Yeonkoung scored 14 crucial points for Korea as the world No.10 powered past North Korea in thrilling three-setter 25-17 25-23 25-19 to capture their first win at the FIVB Volleyball Women’s World Championship Japan 2018 Asian Qualifiers Pool B encounters at the Nakhon Pathom Gymnasium on Wednesday.

Kim Yeonkoung performed well to score 11 attacks and 3 aces, while Kim Suji contributed 13 points to the winning side including 5 blocks and 2 aces. Jong Jin Sim was the lone player to score double figures for DPR Korea as she topped all scorers with 16 points. Ri Sun Jong added 9 points including 4 blocks. Korea imposed solid defence for the comfortable 25-17 win in the first set. DPR Korea pulled their game together in the second set as Jong Jin Sim performed brilliantly on defence and offence to guide DPR Korea to a narrow 21-20 lead. However, combination attacks from Kim Yeonkoung, Kim Suji and Park Jeongah became a great asset for Korea as the Koreans caught up with DPR Korea at 23-23 and went on their good show to win the tightly-contested set 25-23.

Jong Jin Sim still led the DPR Korea’s spectacular attacks in the third set, which they advanced with wide margin 14-8, but Korea fought back hard to level 19-19 and stormed on for the come-from-behind 25-19 win in the set. After the match,

Korea will have a rest day on Thursday and will next take on Iran the day after, while DPR Korea will play Iran on Thursday.

“This is our first match in this tournament against DPR Korea and I think we played well against them. I’m very glad that my team started with win. We played them the last time at the 2011 Asian Senior Women’s Championship in Chinese Taipei. At that time, I was a staff member of the team and we beat them 3-1. They came back much stronger this time with effective receiving and digging. I think we still need a lot of practice for our next match against Iran. However, I admit that we started badly in the second and third sets because this is our first time that the setter and attacks have a chance to learn each other,” Korea head coach Hong Sungjin commented after the match.

“Kim Keonkoung did not play in the World Grand Champions Cup in Japan early this month because we have been competing for four months since the World Grand Prix and we became so tired. Kim was also tired and she just would like not to play in that tournament and concentrate in this competition here instead.”

Thailand are playing against Iran at the moment.