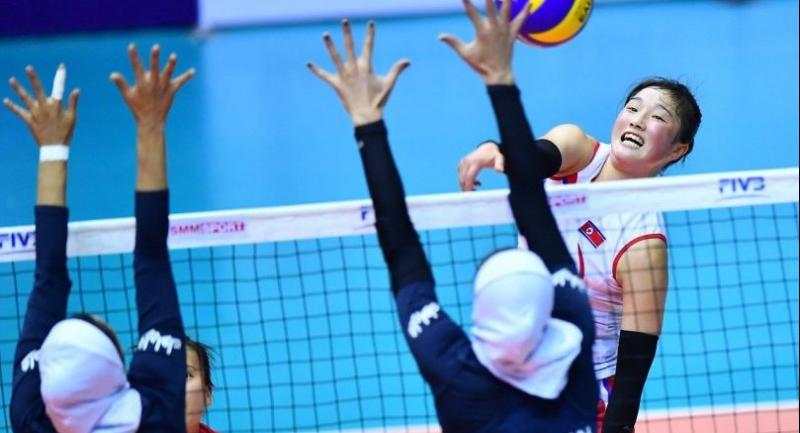 Nakhon Pathom, Thailand, September 21, 2017 - Jong Jin Sim tuned a smashing machine on Thursday as she scored 32 points to steer DPR Korea to their first victory at the FIVB Volleyball Women’s World Championship Japan 2018 Asian Qualifiers Pool B at the Nakhon Pathom Gymnasium following a scintillating 25-23 25-11 25-18 win over Iran on Thursday.

Jong Jin Sim, one of the most experienced players in DPR Korea who helped the team beat Thailand 3-2 in the quarter-finals at the 2010 Asian Games in Guangzhou, China, scored 30 attacks, 1 block and 1 ace. Son Hyang Mi added 9 points from her attack hits. Mahsa Saberi led Iran with 15 points including 14 kills from 41 attempts.

DPR Korea and Iran were seeking their first win in the top-tier competition after their loss on the opening day, with the former going down 0-3 to Korea and the latter losing the similar margin to Thailand.  Both teams started encouragingly on Thursday. However, DPR Korea, fielding better individual talents, produced excellent form in defence to take a commanding 14-8 lead in the first set. Iran, mixed by six experienced players who competed in the last month’s Asian Senior Women’s Championship and young talents led by Mona Ashofteh and Mona Deris Mahmoudi, regained their composure to hit back bravely for the 23-23 tie. However, DPR Korea proved steadily to claim the remaining two points, with devastating Jong Jin Sim overcoming the Iranian blockers with her powerful attack and Ju Un Hyang carrying out a well-placed serve which went unanswered. DPR Korea took the hard-fought first set 25-23.

The second set was a different script when the Koreans dominated the whole game to lead 21-9. The Iranians regrouped with determined efforts of staging a comeback, but the formidable rivals did not give them any opportunity. DPR Korea allowed the younger rivals two more points to wrap up the lop-sided set 25-11.

The third set was tightly-contested as Iran regained their composure to match DPR Korea’s power and strength and trailed 14-15. Still, the Koreans held on their nerves and went on their combination attacks to win the set 25-18.